Just how screwed is Mitt? 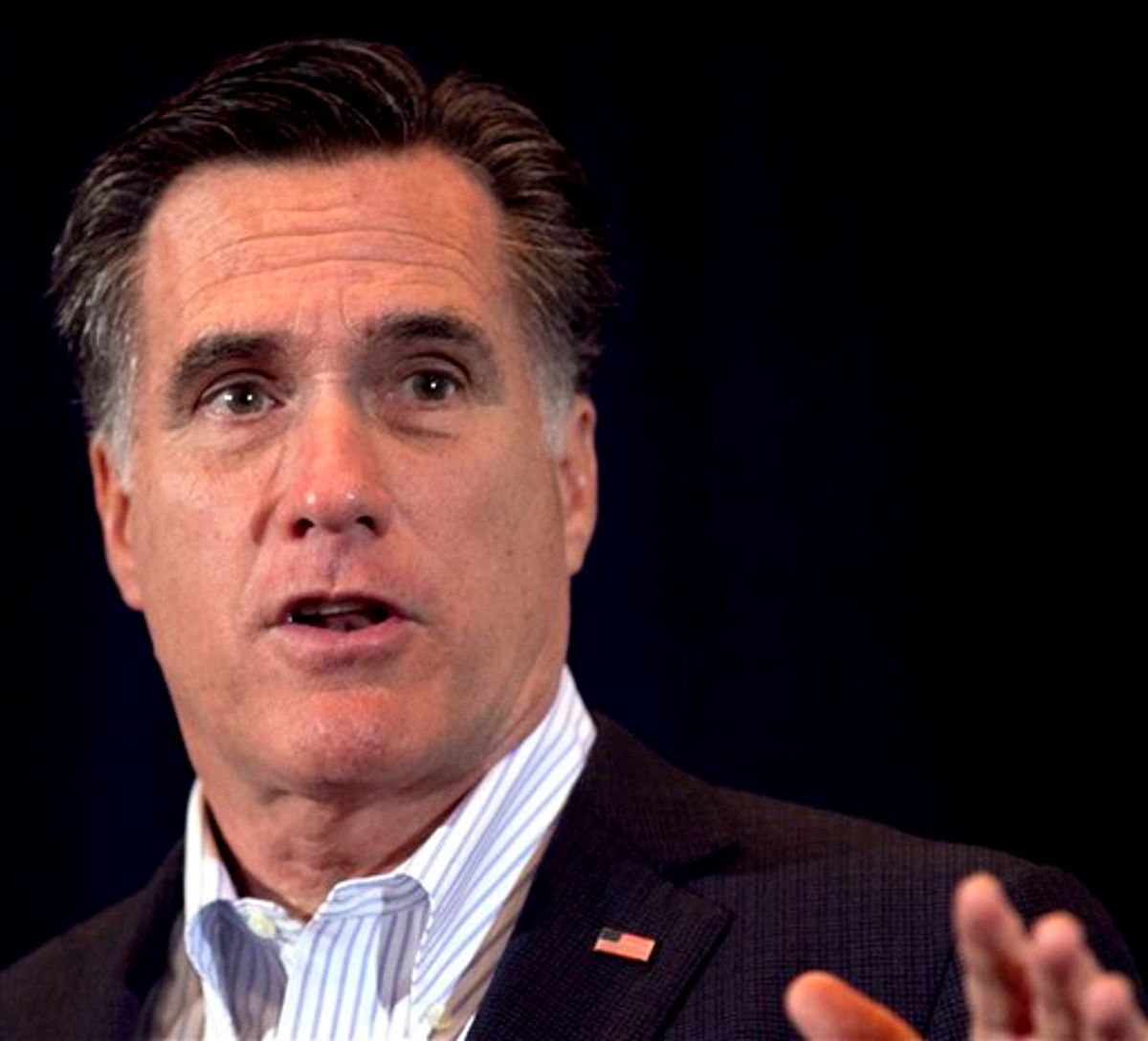 FILE - In this March 23, 2012 file photo, Republican presidential candidate, former Massachusetts Gov. Mitt Romney speaks in Metairie, La. The unemployment rate doesn't matter to Rick Santorum. Newt Gingrich has more baggage than the airlines. Both are compromised Washington insiders who have bent their principles for money and influence. So say Mitt Romney and his allies. (AP Photo/Steven Senne, File) (AP)
--

There’s no disputing that Mitt Romney is a very unpopular politician right now. The question is whether the damage he’s sustained during the Republican primary season is a temporary phenomenon, or if it will haunt him right through the November election.

Romney’s image problem is in the news this week thanks to two new polls that show him with alarmingly high negative ratings. An ABC News/Washington Post survey released Wednesday found that 50 percent of voters have an unfavorable view of the likely Republican nominee, compared with just 34 percent who rate him favorably – a lower score than any nominee has registered in the ABC poll going back to 1984. Romney fared about as poorly in CNN’s newest survey, which gives him a 37-49 percent favorable/unfavorable score.

This helps explain why the CNN poll also shows Obama opening up an 11-point lead over Romney, 54 to 43 percent.

The hope of Democrats, obviously, is that a trying primary campaign that has forced Romney to pander relentlessly to the right, highlighted his penchant for flip-flopping, and seen him commit one baffling “wealth gaffe” after another has created a permanently negative impression in the minds of swing voters – one that the Obama campaign will be able to reinforce once it turns its guns on Romney.

The counter to this is that at least one previous candidate has overcome the kind of image damage that Romney now suffers from and gone on to win the White House in the fall. That would be Bill Clinton, who racked up favorable scores as awful as Romney’s throughout the spring of 1992. By July of that year, though, Clinton overtook George H.W. Bush, and from that point on he never trailed in an independent public poll, ultimately unseating Bush by 6 points.

And on close inspection, a case can be made that Clinton’s image problem at this point in '92 was even more dire than Romney’s now is. After all, Clinton was hit with several damaging scandals during the Democratic primary campaign (Gennifer Flowers, the Vietnam draft), and only survived them because none of his opponents were broadly acceptable to the party. The “Slick Willie” label was applied to him early, and it stuck. By the time he became the presumptive nominee in early April, Clinton was widely viewed as an unusually dishonest and untrustworthy politician, one who generated strongly negative feelings from voters.

At one point that spring, the Washington Post convened a focus group of swing voters in suburban Chicago:

When they were asked to voice ""the first thing that comes to your mind when I mention the name Bill Clinton,'' the air was filled with epithets: “Slick.” “Slimy.” “Cunning.”

"I call him another (Jimmy) Swaggart or (Jim) Bakker, just from looking at him,'' said Jay Hilk, 64, an accountant, referring to the two disgraced television evangelists.

Two women volunteered that he was "another Kennedy,'' making it clear that was not intended as a compliment.

This calls to mind an NBC News/Wall Street Journal poll from earlier this month in which respondents volunteered words like “discouraged,” “painful” and “depressed” to describe the GOP campaign.

So there is a precedent for a candidate in Romney’s shoes convincing swing voters to give him a second look and getting them to change their minds. That’s the hope for Romney backers now – that he can reintroduce himself in the next few months, deliver a strong convention speech, and make these dark days a distant memory by the fall. Romney lacks Clinton’s natural charisma and salesmanship skills, but who knows? Maybe voters won’t think he’s a bad guy by the time Election Day arrives.

But even if that happens, Romney won’t necessarily be in the clear, because as Jonathan Bernstein points out, voters’ feelings about Obama – the incumbent president – will ultimately matter the most.

This is where the Clinton ’92 parallel goes off the rails for Republicans. At this point back then, Bush’s job approval ratings were somewhere between the high-30s and the low-40s, dragged down by an economy that most voters believed was getting worse. But Obama’s approval score, which bottomed out in the low 40s last summer, now regularly clocks in near or slightly above 50 percent. It’s 51 in the new CNN poll, and his average approval rating is now – for the first time in over a year – higher than his disapproval rating.

That doesn’t put Obama in the same league as Bill Clinton and Ronald Reagan, whose approval scores were moving well into the 50s by this point in their reelection years. But it does mean that Obama is in far better shape than Bush was in 1992 – which means that Romney, at least for now, is not well positioned to replicate the comeback that Clinton pulled off that year.