The justices' consideration of healthcare reform left out the people to whom it matters most: The uninsured 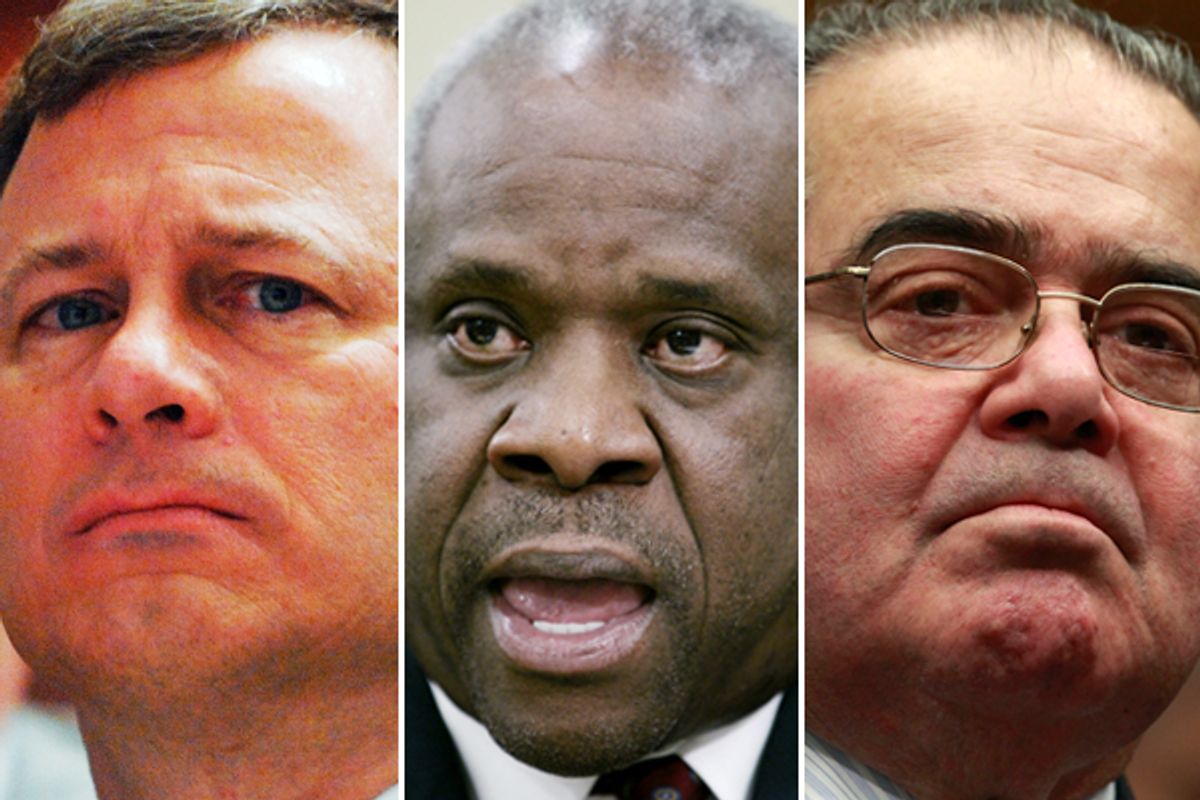 So what did this week’s oral arguments in the Supreme Court tell us about the constitutionality of the Affordable Care Act? There are two ways of predicting what the Supreme Court will do. One is legal analysis. You read the Court’s decisions, see what broad principles the judges have endorsed, and then apply those principles to the case before you. But there is a second approach, which I’ll call Kremlinology, after the old practice of analysts trying to guess what the Central Committee of the Soviet Union was up to. This attempts to piece together any evidence one can find of the whims of those in power, in order to intelligently guess how that power will be used.

One needs to keep that distinction in mind when one reads CNN legal analyst Jeffrey Toobin’s now-notorious statement Tuesday on CNN:  “This law looks like it’s going to be struck down. I’m telling you, all of the predictions, including mine, that the justices would not have a problem with this law were wrong. I think this law is in grave, grave trouble.”

Some ACA opponents have taken this as vindication of their constitutional claims, showing that those claims were right all along. But, of course, they show no such thing. They show only that there are members of the Supreme Court who are tempted to exercise their power in a certain way. Determining whether legal claims make any sense is an entirely different undertaking. Before the oral argument, Toobin’s only source of information was the law. And legally, the objections to the statute were garbage. The Constitution’s text and the Court’s decisions provided no basis for finding any constitutional problem with the statute. The only justice who could vote against the mandate in a principled way was Clarence Thomas, who made it clear years ago that he wanted to radically restrict federal power. Now it seems possible (all of this comes with the caveat that the judges’ questions are not reliable indicators of how they will ultimately vote) that the oligarchs in robes are happy to disregard the rules they’ve followed in the past if that means that they can help out the Republican Party.

Remarkably, everyone conceded that the purported constitutional difficulties could be resolved if the statute were changed in minor, technical ways. Justice Kennedy declared that “the reason this is concerning, is because it requires the individual to do an affirmative act.” This is the action/inaction distinction about which so much ink has been spilled: Congress is trying to regulate you when you’re not doing anything! But as Justice Sotomayor pointed out, Congress does the same thing every time it gives anyone a tax credit or deduction for doing something, like putting solar panels on their home. Anyone who doesn’t do that is penalized for inactivity. A tax credit for having insurance is clearly constitutional, and the mandate is just the functional equivalent of that.

The moral outrage that the law has provoked is weird. It’s a tyrannical intrusion on your liberty if government makes you pay for health insurance before you get sick and demand treatment! But if millions of people die from preventable diseases, or are bankrupted by medical expenses, no problemo. Libertarians focus obsessively on threats to liberty from the state, but there are lots of other things that threaten your ability to live as you like. Getting cancer and not being able to afford chemotherapy, for instance. (No, you can’t get that at the emergency room.)

One of the most remarkable things about Wednesday’s colloquy on severability -- whether to trash the entire statute and to cut off federal insurance subsidies to millions of the working poor because you don’t like one small provision, the mandate -- was their simultaneous sensitivity to politics (they predictably divided along party lines) and pretense of obliviousness to it.  “One way or another, Congress is going to have to reconsider this,” Justice Scalia said, “and why isn’t it better to have them reconsider it ... in toto?”  But this presumes that there will be another round of legislation. The more likely scenario, given the extraordinary difficulty of passing the law in the first place, is that there will be no healthcare reform at all for many years to come. The Democrats will have no stomach for another such fight, and the Bush administration showed by its inaction that Republicans don’t give a damn about affordable healthcare.  The best historical parallel here is the period after Reconstruction, when the Supreme Court struck down civil rights and anti-lynching laws on technical grounds, lecturing Congress that it needed to rewrite the statutes. The political moment had passed, and there was no more civil rights legislation for over half a century. A decision invalidating the ACA risks similar paralysis.

The obsessive worry about an overbearing federal government suggests another historical parallel. In 1916, Congress banned the interstate shipment of the products of child labor. The rhetoric was as hysterical then as it is now: The Court declared that if Congress could do this, “all freedom of commerce will be at an end, and the power of the States over local matters may be eliminated, and, thus, our system of government be practically destroyed.” The Supreme Court’s invalidation of the law astounded even those who had most strenuously opposed enactment and provoked a wave of national revulsion and the rapid enactment of a second law — a tax on products of child labor — which the Court also struck down, in 1922.  The decision was overruled in 1941. The Court did not save America; what it actually accomplished was to thwart democracy – the law passed by 337-46 in the House and 52-12 in the Senate - and consign large numbers of children to the textile mills for two decades. Healthcare is another context in which the Court is at serious risk of ravaging the lives of large numbers of actual people. In both the child labor and healthcare contexts, opponents of reform flee from illusory dangers into the jaws of real ones.

But, as I’ve explained at length, none of these constitutional objections make sense to anyone not in the grip of intense anti-Obama fever. If the real point is to wallop Obama, there’s an even more mischievous option than invalidating the statute wholesale. At several points in the severability discussion, the justices worried that they would have to, as Justice Breyer put it, “spend a year reading all this” to decide which parts to strike down. I suggested earlier that that might be a reason to uphold the law, in order to avoid all that bother.

But there’s another possibility. A nasty trick that terrorists sometimes use is to set off a bomb in a crowded square, and when ambulances come and bystanders rush to help the wounded, detonate a second bomb in the same place. If the Court really wants to drive Obama nuts, it could invalidate the mandate and hold the case over for argument next year on which parts of the law should be severed. One reason the administration wanted the Court to decide this issue fast was because huge administrative mechanisms are being set up, and so the constitutional issues need to be resolved quickly. This would put the whole system under a lasting cloud of uncertainty. If you keep the explosions coming over a long period of time, that will really mess with the Democrats’ heads. Terrorists, of course, don’t care about harm to innocent bystanders. Does the Court?