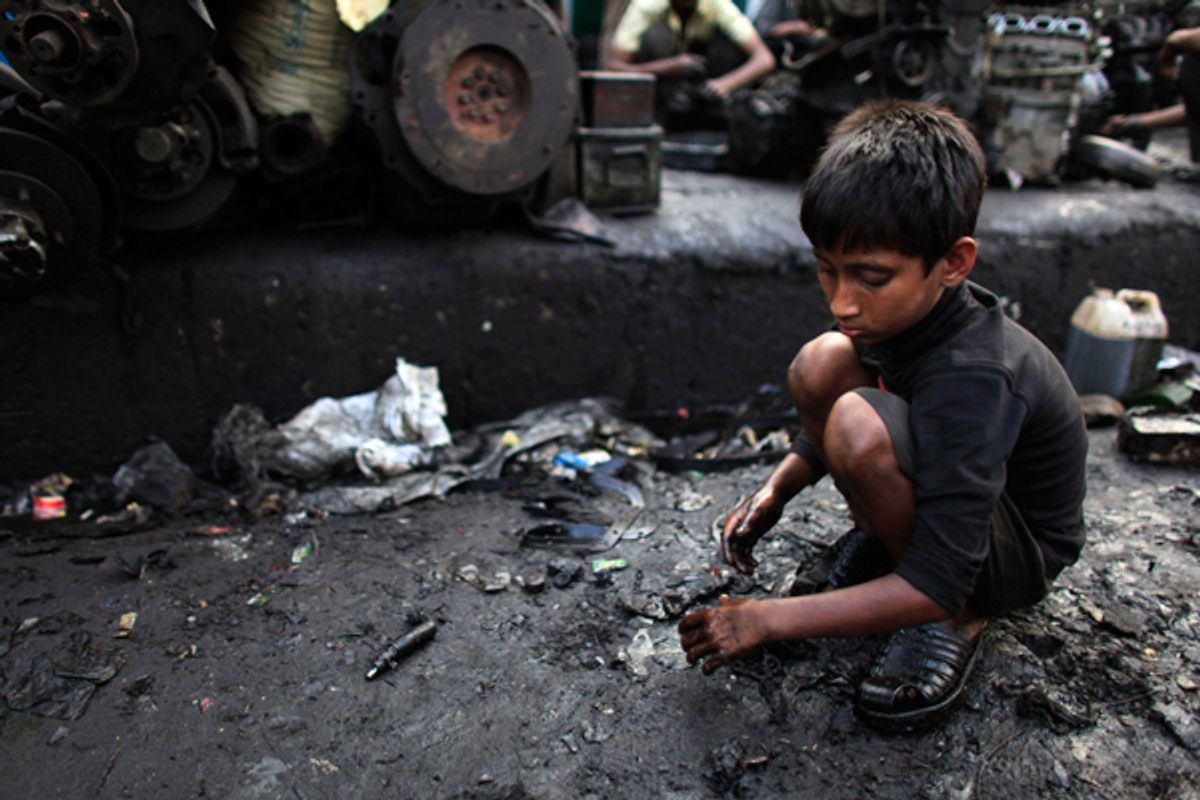 DHAKA, Bangladesh — By the eighth day of the hunger strike, Mijanur Rahaman had lost 15 pounds of bodyweight, and his blood pressure had plummeted.

Rahaman and a hundred others like him — including women and children — are 10 days into what they say is a fast-unto-death, a desperate call for release from a permanent state of limbo for the residents of the India-Bangladesh enclaves.

Officially known as "adverse possessions" — and colloquially known as "chitmahals," or paper palaces — are a collection of Indian and Bangladeshi villages home to 51,000 people, where for generations, citizens have been stuck on the wrong side of the border.

They are unable to leave their villages without illegally trespassing on foreign soil. Residents of the Bangladesh-India enclaves are able to get electricity only by bribing local officials. For access to schools, jobs and hospitals, they must pretend to be someone else.

“If we take someone to the hospital, they now ask for national ID cards,” complained Mokul Hossain, a resident of Dashiar Chara enclave. “If we can’t show them then they leave us to suffer outside the hospital. Our only choice then is to take them to a witch doctor.”

As desperate as a hunger strike is, this one hasn't received the press that others have in the past. Like the plight of the stateless enclave residents themselves, this extreme act of protest has largely gone unnoticed abroad.

The situation enclave residents find themselves in would be similar to that of Liberty Island — which belongs to the New York state but is located inside New Jersey — if the Statue of Liberty was housing 50,000 people who had been trapped there for more than six decades.

Without citizenship, enclave residents feel that they will never have the chance to improve their lot. They have been fighting for their rights since 1947.

The ongoing struggle of the enclave residents highlights the dysfunctional relationship between India and Bangladesh, and their many unresolved border issues. Relations between the neighbors have almost always been contentious, souring immediately after a brief honeymoon period when India helped Bangladesh gain independence from Pakistan in 1971.

Enclave residents have grown increasingly bereft as numerous accords to resolve border disputes have been inked, but few get implemented.

The latest was a pact signed last September to simply swap ownership of the enclaves, but ratification of the land-swap deal juddered to a halt in the Indian parliament.

“We want exchange of the lands,” said Moniruzzaman Monir, a resident of Dashiar Chara, an Indian enclave inside Bangladesh. “All opportunities are closed to us until then.”

Delhi and Dhaka theoretically settled a host of disputes last September, from finally agreeing on a demarcation of the land border to pledging to stop extrajudicial killings of Bangladeshi citizens by Indian border forces.

But little has changed on the ground. This has driven people like Rahaman, who daily live the consequences of these political differences, to extreme steps such as the indefinite hunger strike.

The fast-unto-death is a grand Indian tradition. During India’s struggle for independence, Mahatma Gandhi frequently employed the tactic to extract concessions from British colonial rulers, prompting an aggravated Winston Churchill to send a telegram inquiring “why Gandhi hadn’t died yet.”

Most recently, septuagenarian anti-corruption crusader Anna Hazare’s hunger strike in April 2011 led to nationwide protests in his support, ending with the government agreeing to form a committee to appoint an anti-corruption ombudsman.

With little other leverage, impoverished enclave dwellers resorted to the hunger strike, hoping that this drastic measure will finally get their suffering heard.

At least five have been admitted to hospitals since the strike began on March 18. But in stark contrast to the Hazare media storm, their action has received minimal coverage and has failed to elicit a peep from the officials whose attention they are seeking.

Rahaman, who lives inside the Indian side of the border, is understandably bitter.

“There is no human in the government. They are all stupid,” he said.

Attracting the bulk of the ire of those instigating for a resolution is chief minister of the Indian state of West Bengal, Mamata Banerjee.

West Bengal, where all the Bangladeshi enclaves are located, is suspected to oppose the land exchange because of worry over how the subsequent change in electorate might impact local elections.

Banerjee has a history of scuppering landmark deals between Dhaka and Delhi. Last September the Indian Prime Minister Manmohan Singh landed in Bangladesh ready to sign a crucial water-sharing treaty, only to pull out due to Banerjee’s last minute opposition.

India considers itself to be a kind of big brother figure to the younger nation, but most Bangladeshis view the South Asian giant as the neighborhood bully.

Similarly many Indians distrust Bangladeshis, viewing them mostly as a source of unwanted large-scale illegal immigration.

The trouble the two countries have in reconciling border issues and executing the land swap raises questions about their ability to tackle more complex disputes over trade and natural resources, and bodes poorly for the future of regional cooperation in South Asia.

The Bangladesh-India enclaves are by no means unique. Enclaves can be found on almost every continent.

In November 2011 a New York Times blog compared the Bangladesh-India setup to the enclave complex of Baarle, a town split between the Netherlands and Belgium on the Dutch side of the border.

Baarle is “a money-spinning tourist attraction,” where houses on the border move their main entrance to face whichever country has the cheaper taxes because taxes are paid to the country where the front door is located.

Baarle, the blogger opined, was a best-case scenario. The Bangladesh-India complex, on the other hand, was the worst.

On March 26, people in Indian enclaves inside Bangladesh hoisted the Bangladeshi flag in celebration of the nation’s day of independence. It was their way of asserting their claim of citizenship of the country they have spent their entire lives in.

Meanwhile, Rahaman and his neighbors continued their fast, determined to call attention to their cause.