The truth about Keystone

Focus on the pipeline distracts from the real question: Whether we should be using tar sands oil in the first place 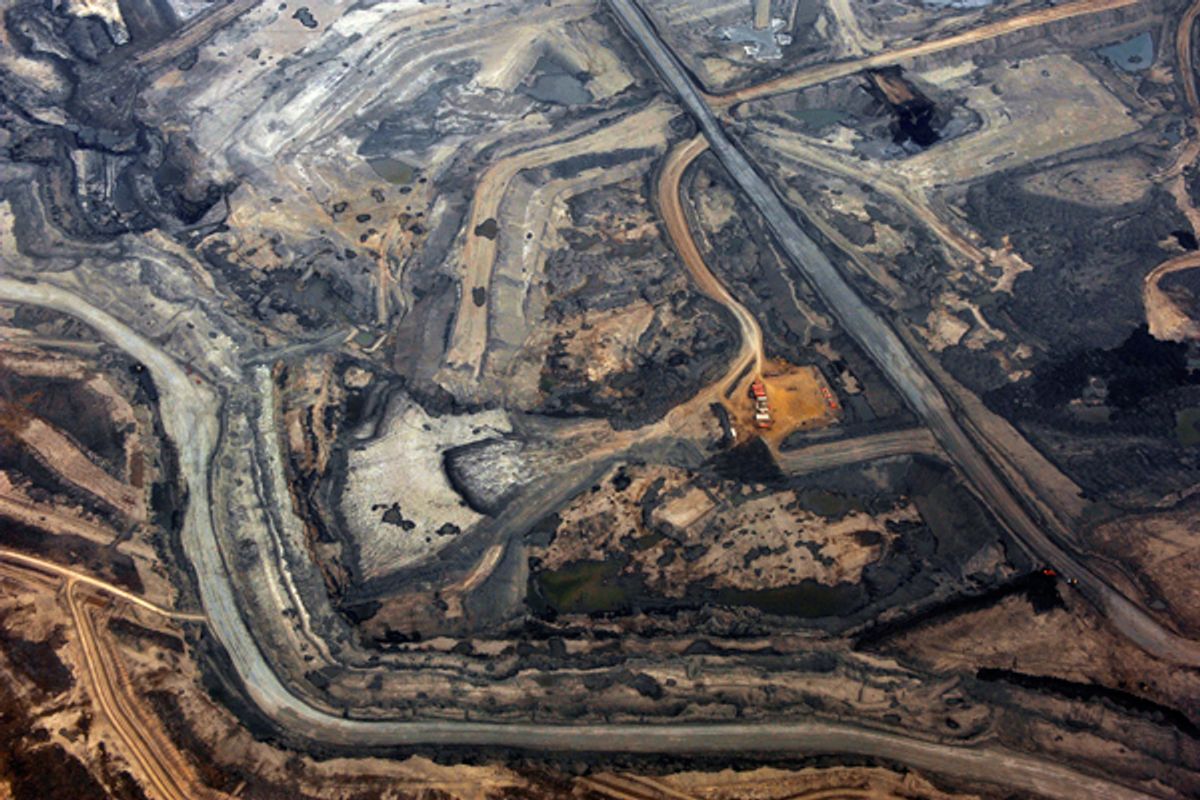 When President Obama announced his support for the southern half of TransCanada's Keystone XL pipeline last week in Cushing, Okla., it was a blow to the environmental groups that had worked to stop the pipeline from going forward and succeeded in delaying approval of its northern half. In particular, Obama's statement that his administration had already approved “enough new oil and gas pipelines to encircle the earth” seemed intended to remind anti-pipeline campaigners that Keystone XL is just one of many pipelines with the potential to transport Canadian tar sands oil to the United States, and TransCanada just one of many players in the energy game.

Cushing was a particularly appropriate setting to convey that message: It's the crossroads for much of the nation’s oil and gas infrastructure, and inadequate pipeline capacity has made the town a bottleneck for fossil fuels, particularly with the recent influx of oil coming from Alberta. At any given time, between 30 and 40 million gallons of oil sit there, awaiting transport to Midwestern or Gulf Coast refineries. This means that the chunk of the pipeline that connects Cushing's surplus to refineries along the Gulf Coast — the chunk of the project that’s moving forward — is the one that TransCanada really cares about in the short term.

Other companies aren’t waiting around to see what happens with Keystone XL either: Enbridge, a Canadian energy company, has already purchased a stake in a pipeline that currently transports crude from the Gulf Coast to Cushing, with the intention of reversing the pipeline’s flow in order to carry tar sands oil south from Alberta. In conjunction with Houston-based company Enterprise, Enbridge is also planning to construct a new pipeline that would expand an existing route to bring tar sands oil to the Gulf; because the new pipeline would not cross international borders, it would not require State Department review. Those two projects combined would add the capacity to transport 850,000 barrels of tar sands oil each day by 2014, according to Enbridge’s CEO; by comparison, Keystone XL would transport around 700,000 barrels daily.

And there are plenty of other ways to get tar sands oil into the country: Other pipelines in the extensive network of fossil fuel infrastructure built to transport regular crude could begin carrying tar sands oil instead, while existing tar sands pipelines could ramp up the amount of oil they transport. Tar sands oil could also be transported by rail, though it’s less economical to do so; nevertheless, Canadian railroads have long been eyeing the fuel, and a report commissioned by the U.S. State Department estimated that railroads could transport up to 1.25 million barrels per day. In short, Obama’s announcement was a reminder that delaying, or even derailing, Keystone XL is a temporary victory, and one more important in symbolism than substance.

Pipeline protesters know this: As Bill McKibben, one of the most prominent leaders of the anti-Keystone movement, told Joe Nocera, “Keystone, by itself, won’t make or break the environment.” On the other hand, nor will it create jobs, reduce our reliance on foreign oil, or affect gas prices. In sum, the pipeline itself will have remarkably little effect on any of the issues it’s come to symbolize. Nocera and others have used that fact to argue that we might as well just go ahead and build it — that is, to shut down the debate over Keystone XL and tar sands instead of opening it up.

But anti-Keystone forces have always been upfront about the fact that they see the battle over the pipeline as a political one. McKibben has repeatedly described the pipeline protests as the start of a broader fight against climate change, and as a means to galvanize a public conversation about climate change, fossil fuels and carbon emissions — topics that American politicians have for the most part tried desperately to avoid.

Lately, though, that conversation doesn’t seem to be happening. Instead, as Lisa Song of Inside Climate News argues, “climate change has taken a back seat in the debate” in recent weeks. Meanwhile, conservative groups continue to press any chance to blame President Obama for lackluster job creation and high gas prices, however unrelated those issues are to the pipeline. If Keystone XL matters at all, it's for the questions it raises about the impacts of different energy sources, and the types of energy we should be prioritizing. When tar sands oil, rather than just Keystone XL, is the issue, a different range of options opens up.

A growing body of evidence suggests that tar sands oil is a different type of fuel than regular crude, and that we should treat it as such. From a purely physical standpoint, tar sands oil is a different beast: It's transported in the form of diluted bitumen, which is heavier and more corrosive than regular crude. A recent study reviewing the existing evidence suggests that bitumen spills are more likely, more damaging and more difficult to clean up than conventional crude oil. While estimates vary as to the precise climate impact — the EU says tar sands result in 22 percent more emissions than conventional oil, while a study in Nature estimates a 15 percent greater impact and an EPA analysis puts it as high as 82 percent — it’s generally acknowledged that the process of extracting and processing tar sands oil is an energy- and emissions-intensive one.

The question of whether tar sands oil should be classified differently from regular crude has already generated controversy in the European Union, which has been debating a proposal to label tar sands oil as highly polluting. Fearing that such a classification would doom tar sands oil in European countries that are trying to meet carbon reduction targets and tarnish the fuel’s reputation elsewhere, Canada has lobbied heavily against the proposal, and even threatened to take the matter up with the World Trade Organization should it pass. A vote last month failed to reach a conclusion, and the issue is still up for debate.

While the political calculus is obviously different in the U.S., where an entire political party is determined to ignore the scientific consensus around climate change, some states and regions are trying to look at fuel sources more systematically. As part of its state-level climate policy, California’s Air Resource Board has issued a low-carbon fuel standard, which would require fuel producers to reduce greenhouse gas emissions across the full extraction-to-combustion life cycle. The oil industry has brought a legal challenge against the regulation, which it claims discriminates against out-of-state fuel sources. If the court rules that California can implement the low-carbon fuel standard, though, it could spark a wave of similar efforts. In particular, the New England and mid-Atlantic states that make up the Regional Greenhouse Gas Initiative may follow suit — though that initiative is also under siege, particularly as Enbridge and other pipeline companies explore options for increasing the flow of tar sands oil to Northeastern states.

In any case, a more comprehensive consideration of tar sands oil and other fossil fuels is in danger of getting lost amid the seemingly endless cycle of political maneuvering over the physical pipeline itself. The fact that Keystone’s fate is up for debate at all is remarkable, considering that it was considered a done deal. But if environmentalists are to avoid getting bogged down in the never-ending battle over a single piece of the nation’s gigantic energy infrastructure, they need to start turning an impressive feat of political mobilization into the promised conversation about tar sands oil and fossil fuels before they lose momentum entirely.