The language of "terrorism"

The chilling murder of a Muslim mother of five reflects years of bigotry and stereotypes. It's time to change that 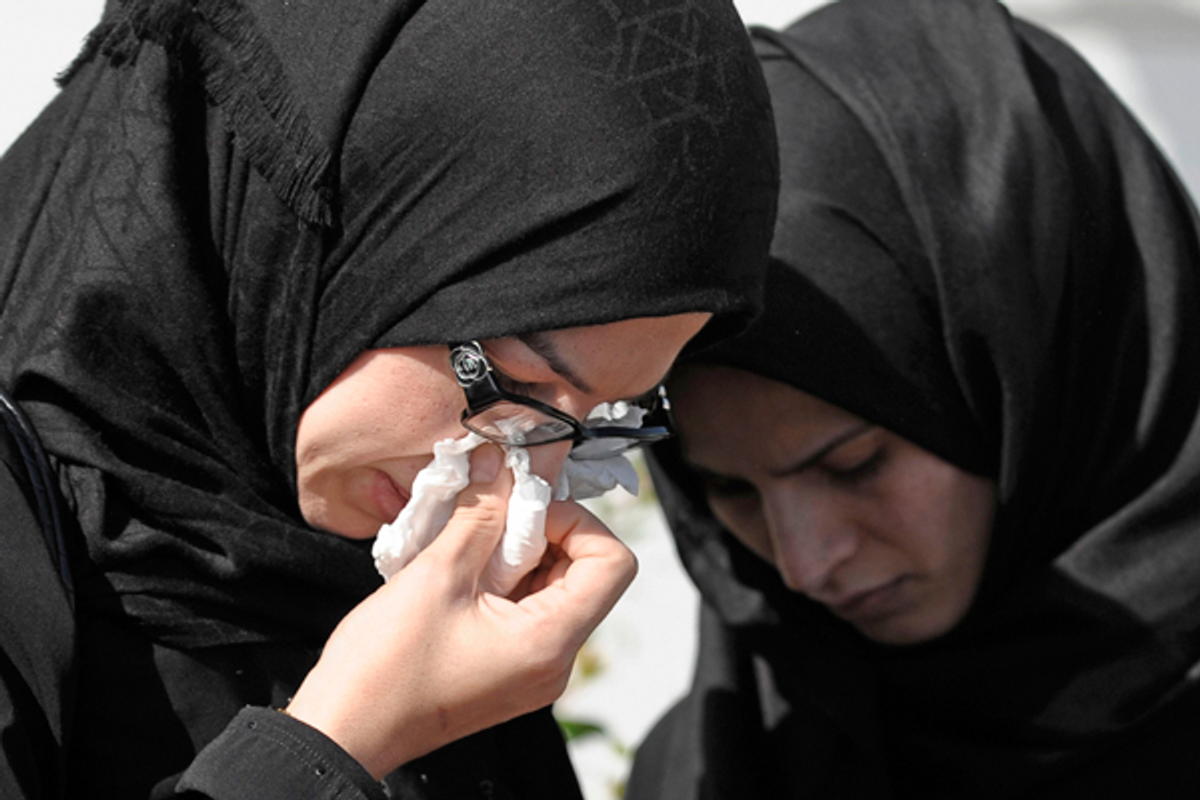 This article originally appeared on Colorlines.com

Police in Southern California have insisted that the brutal beating death of Shaima Alawadi is an isolated incident, and not a crime motivated by hate. Alawadi was killed after a brutal beating last week in El Cajon, Calif. and the attack has sent shockwaves across the country.

At a memorial service this week for the 32-year-old wife and mother of five, Salam Al-Marayati, president of the Muslim Public Affairs Council, said it would be irresponsible to jump to conclusions cautioning, “We don’t know if it was a hate crime. We don’t know if it wasn’t a hate crime.” What we do know is that Alawadi 17-year-old daughter Fatima, found a note next to her slain mother’s body that read, “This is my country. Go back to yours, terrorist.”

Those words and the animosity and bigotry experienced by Muslim communities of diverse racial backgrounds is rooted in years of ignorant stereotypes. According to the FBI’s latest report released last November, hate crimes in the United States against Muslim people increased nearly 50 percent in 2010. And while hate crimes have risen, Muslim communities have been shamelessly spied on by NYPD as Seth Wessler has written about.

The chilling murder of Shaima Alawadi has sparked nationwide reflection about anti-Muslim and anti-Arab bias, profiling and hate. There have been “hoodie and hijab” solidarity rallies with communities that are speaking out about the role of racial profiling in the murders of Trayvon Martin. Whether or not the investigation points to an official hate crime, the language on the note Fatima found is hate language. Sadly, hate language often ends in destruction. It’s the language of death.

And we are bombarded with it. According to a report from 2005 about the perceptions of Arab Muslims for which 2,420 people were interviewed in the U.S. and western Europe, “The terms Islamic or Muslim are linked to extremism, militant, jihads, as if they belonged together inextricably and naturally (Muslim extremist, Islamic terror, Islamic war, Muslim time bomb).” The recommendation at the time was that “Western media organizations must see normal Muslims in everyday life, as professionals, educators, parents, community leaders and participants.”

While communities mourn and seek justice for both Alawadi and Martin, many of us are at the same time, feeling the need to denounce hate at the very root. As we approach the year 2050 when people of color are projected to become the majority, our multi-tasking for the future is largely about challenging dangerous stereotypes, language, images and fears. Even the very near future has to be imaginable so we have to call out the deep-seated biases that impacts how many people of color can move and thrive in the world.

Changing the conversation on hate

After researching and writing the first half of this piece, I went home to think through what else needed to be said. I shared a cab to Brooklyn with my friend Jaime-Jin Lewis, executive director of Border Crossers. She talked to me about a chart she was compiling that included the different stages of development for kids K-5, corresponding with age-appropriate conversations on race and difference. I pulled out of my backpack a study I had discovered minutes earlier about the bullying of Muslim children, and I read her the following shocking quote: “Indeed, growing up Muslim in the U.S. in the 21st century is probably one of the most challenging tasks in human development.”

It was then that the man driving our cab, a father of three, piped up to ask if we were Muslim. He shared that he was Muslim from Pakistan and that almost everyone that gets into his cab wants to know where he’s from, but that when he wants to be left alone, he does not share he is Muslim, but rather tells people he is from Afghanistan. He said that Americans really believe immigrants are “aliens,” like on his green card.

We talked the whole ride home. He studied business administration in England, but has through his own interest become well versed on religions of the world and is always baffled at how other religious people can forget that holy books are always up for interpretation and that every religion has a minority of extremists. We laughed about and lamented society’s unwritten rule that discussing religion, race and politics is not polite conversation. He said that for him, the most beautiful gift from God is a good partner and children, and that he was the luckiest man in the world because he had those things. And he also reminded me of something quite basic: That in addition to whatever racial, ethnic, religious and other identities we have, we are all human and that everyone wants for that humanity to be recognized and remembered.

I asked the driver if he was concerned for his three small kids and the hostility they might encounter in school. He said that he wasn’t because he was going to prepare them to be sure of themselves and that he’d send them to public school so they could learn how to interact with kids of all ethnic and religious backgrounds and that as adults, they would be good listeners and accepting of people who are not just like them, because that’s the way of the world.

The price of terror

The policy brief I was quoting from to Jaime-Jim in the taxi is Global Battleground or School Playground:The Bullying of America’s Muslim Children by Dr. Pia Rebello Britto at the Institute for Social Policy and Understanding. The report concludes there needs to be extensive effort put into educating the American public about the lives of Muslims — both in popular culture and in schools.

The stakes are high. Evelyn Alsultany, a professor at NYU and author of a forthcoming book on Arabs and Muslims in the media wrote in January about how Lowe’s and other companies pulled their advertising from the reality show "American Muslim," based on the possible discomfort people may feel when seeing Muslims and Arabs in non-stereotyped roles outside of the “terrorist” trope.

So the concern here was that showing real-life everyday families (albeit in highly dramatized for reality TV situations) might humanize Muslims too much and make “real Americans” drop their guard.

The stereotype of Islam condoning violence is prevalent. Even now, it’s coming up in the reader comments of articles about Alawadi murder. Knowing absolutely no facts beyond the same things that you and I know, some readers are speculating about how this could be the case of an “honor killing.”

But make no mistake: The note left by Alwadi’s body was about terrorism. Terror and terrorism are among the most controversial terms in our society. Even the United Nations cannot agree on whether or how to define them. It’s been made quite simple for people of color in the U.S., though. We are not allowed the t-word for the crusades, killing of indigenous people in the Americas, the terror lived by Black people under Jim Crow, the terror communities of color feel at the hands of rogue police. However, Fatima al-Himidi, Alawadi’s daughter, was not afraid to say in a recent interview, “We’re not the terrorist, you are, whoever did it.”

Mónica Novoa is the campaign coordinator of the Drop the I-Word campaign to eradicate the use of the dehumanizing "illegal" in media and public discourse.