The conservative grip on power

A ruthless GOP power grab, centered around the Supreme Court, has cemented conservative control in Washington 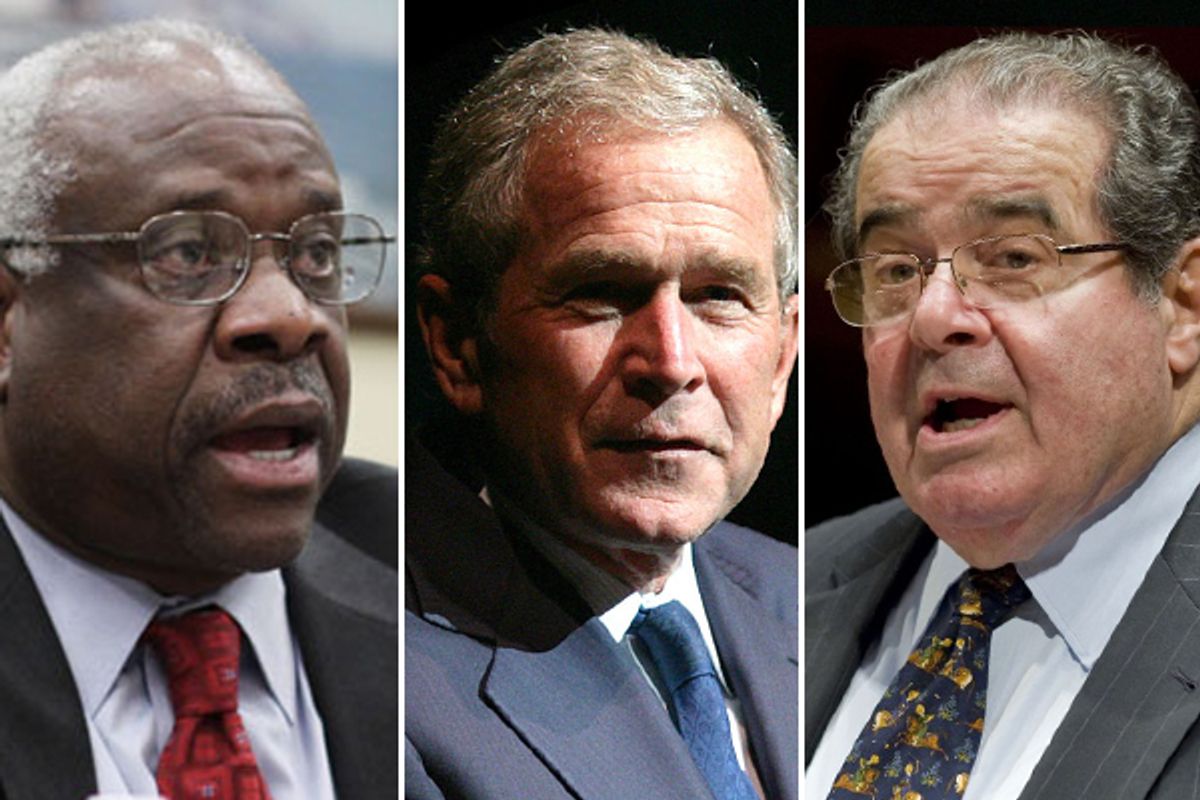 Writing in Salon, Natasha Lennard proposes that with the warm weather we can again expect the Occupy movement to shoot up. Arab Spring, American Spring. She’s right about one thing: Like in the decades before the Arab Spring, it has been a long, cold, American winter. In the 30 years since coming to power here, Republicans have used their initial ascent to power to seal themselves into office as tightly as the pharaohs. Smart commentators have noted how lawless the conservatives are in making substantive decisions, but that’s not the worst of it. The worst of it is how they use their tenure to make it increasingly impossible to oust them.

With this week’s Supreme Court hearings -- which will end, liberals worry, with the justices overturning healthcare reform -- we are nearing the apotheosis of conservative power. Let us recount how we got here: In 2000, a mob of conservative thugs stopped the vote recount in Florida. And that was before the court got involved, the five conservative justices seizing the election and handing the White House to George W. Bush. Secure in the tenure of their undemocratically selected president, the two older conservative justices, William Rehnquist and Sandra Day O’Connor, retired from the bench. Bush replaced them with two young conservatives, destined, by constitutional design and the miracles of modern medicine, to dominate the court into the foreseeable future. At the Supreme Court, it’s always winter (and never Christmas).

The stunningly inept performance by the Bush administration unforeseeably produced the first Democratic federal government since 1994. Immediately thereafter, the conservative Supreme Court majority ruled that the GOP’s wealthy sponsors could spend an unlimited amount of the money putting conservatives in office. Now, the conservative majority on the Supreme Court, appointed, in part, by the conservative president they put in the White House, is preparing to wipe from the statute books the only piece of meaningful progressive legislation in the last half century, passed during the brief Indian summer of a two-year Democratic majority.

And it’s not just the federal government. In 2010, fueled, in part, by the money the conservative justices unleashed, the conservatives took over state legislatures across the country. In power, they enacted a series of measures that should make Hosni Mubarak blush. They redrew the legislative maps to guarantee that they would hold a majority of the legislatures, state and federal, regardless of whether they failed to gain a majority of actual votes. (The design of the Senate, favoring sparsely populated rural states, already way overrepresents the Republicans.) Using a panoply of legislative strategies, they made it infinitely harder for the Democrats to register their supporters and for the Democratic voters, even if registered, to vote. Voters must be reported within 24 hours of being registered or penalties will be levied on the laggard registrars. Would-be voters must produce a fistful of identity documents, notoriously more common among old white (Republican) voters than the youthful and nonwhite Americans likely to support the Democrats. If they run the registration gauntlet, they must again verify their identity on Election Day, with the same culturally skewed set of papers. In the swing state of Florida, the New York Times reports, the activists have given up registering new voters: Too perilous.

True, the Democrats have not been models of political virtue. Cowardly when confronted by their powerful adversaries, confused about the moral grounding of their political vision, faithless to their allies, racketing from one trendy policy initiative to another, without anything resembling long-term planning -- with enemies like the Democrats, who needs friends? But blaming the victim is way too easy. Democrats made the mistake of behaving as if the American rules of representative government still applied. Confronted with the lawless conservative Republicans, their fate was sealed.