You don't need reporting skills to thrive in the news today. All you need is a big mouth or a famous parent 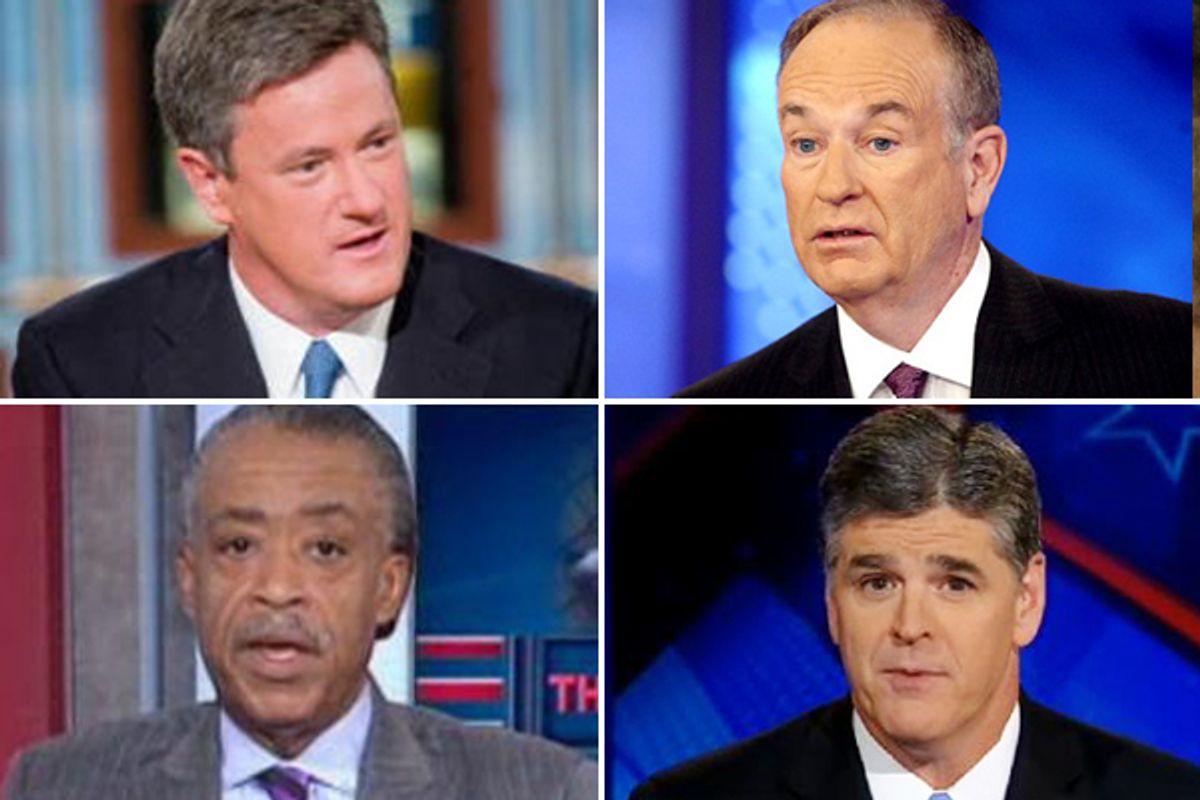 For those who still believe a democracy needs traditional journalism, this is a harrowing time, to say the least. Local newspapers, for a century the foundation of real reporting, continue laying off the reporters doing the scratch-and-claw work of covering communities. At the same time, more media resources than ever are somehow being plowed into media coverage of the media -- an unself-consciously narcissistic "never forget, we're the real story" phenomenon most recently glorified in the documentary "Page One," a retch-inducing heroization of the media desk at the New York Times. Meanwhile, a new push is on to distort what journalism actually is, from editors and reporters being paid by and/or investing in the industries they cover, to journalism schools changing their missions to include corporate marketing. The very definition of "journalist" is being reimagined by those aiming to enrich themselves. And, of course, all this is happening as the relatively few genuine journalists left in America are periodically lambasted for the horrific crime of actually reporting real news and questioning power.

But for all of these trends, none is more disturbing than recent moves to challenge the the basic assumption that journalism is even necessary anymore. In an economy that fetishizes synthetic derivatives rather than tangible products and in a political cauldron that periodically manufactures notions of "post-partisan," "post-racial" and "post-industrial" utopias, the ascendant notion in the media industry is that news organizations and American democracy can survive and thrive in a "post-journalism" era -- one that wholly removes journalism from the news media.

This is the revelation in the American Journalism Review's new must-read, headlined "No Experience Necessary?." The piece looks at how most political talk shows are now hosted by personalities with absolutely no grounding or training in actual journalism. That fact alone is not news -- anyone who has turned on a television in the last few years knows that, in terms of journalism, professional bluster machines like Sean Hannity and Bill O'Reilly are the opposite of Bob Woodward and Carl Bernstein. What is revelatory, though, is the article's look at how "many experienced journalists don't see any reason to worry about the trend" of news media being unmoored from journalism. That's right, the idea that journalism is even necessary is now controversial if not outright appalling to many in the media.

Explaining recent decisions by his news organization to hire people like Ed Schultz, Al Sharpton, Melissa Harris-Perry, Joe Scarborough and others with zero experience in journalism, MSNBC's Phil Griffin summed up the new zeitgeist in a quote that could be the epitaph on journalism's tombstone (emphasis added):

"I'm sorry, I don't care about journalists...I want fair-minded, smart people who understand the world and can interpret it...If they're journalists, great. This notion that you somehow you have to have done something to earn so-called journalists' credentials? Stop."

Griffin deserves some credit for at least being brutally honest about his animus toward journalism (and no doubt, when it comes to sheer hatred of journalism, he's not even close to proud propagandists like Roger Ailes -- after all, Griffin does employ Rachel Maddow, Lawrence O'Donnell and Chris Hayes who anchor some portions of their programs in journalistic inquiry). But that's about where the accolades should stop, because while he's being honest -- his message that we shouldn't "care about" experience in, or basic devotion to, journalism is appalling, as is his scoffing at the idea that "somehow you have to have done something to earn" journalistic credibility. Summarizing a growing sentiment throughout the media industry, Griffin's declaration doesn't merely offer up a flippant middle finger to notions of meritocracy, nor does it just insult an entire profession. It proudly elucidates the fantasy that news media outlets can and should avoid the unglamorous work of news gathering -- i.e. "journalism."

This fantasy, of course, has been the unspoken business model of cut-and-paste blogging, aggregation and cable-TV punditry. The media equivalent of Wall Street derivatives, these cannibalistic forms are built on top of fewer and fewer journalism products -- only instead of creating CDOs and tranches out of shaky mortgages, media companies create websites, blog posts and television shows out of commenting, riffing and snarking on the decreasing amount of content from the few outlets that still bother to report real news.

For the lazy and ill-informed, the trend is a huge boon -- it allows people who have never done the work to report anything and never bothered to educate themselves to now realistically hope for news-media celebrity. Similarly, for the well-connected but untrained, it's a fabulous development -- if you have zero experience in journalism but, for example, happen to be Chelsea Clinton or Luke Russert, then you have every reason to expect a cherished spot in the news media.

And, no doubt, for media executives, the idea of news media sans journalism makes sense as a business strategy. As I am reminded every time I start writing an investigative column, magazine story or book, real journalism is about interviewing sources, digging through reams of data, questioning assumptions and challenging statements from the powerful -- all grindingly difficult processes that require serious training, time and labor. By contrast, the ascendant journalism-free news media model is all about aggregating, pontificating and transcribing -- endeavors that can be done as "cheaply, easily and superficially" as possible, as "The Daily Show's" Jon Stewart recently noted. Thus, bean-counting executives looking at the next quarter's earnings report no longer see a choice between journalism and journalism-free media as much of a choice at all -- they increasingly select the lowest-cost content, the kind that even the most lazy, least-skilled of the media labor market's population can manufacture.

Clearly, this decision is why a disproportionate amount of "news" today isn't actually about expensive-to-report events and stories happening in the real world. It's more often than not the cheap-to-report reaction (or reaction-to-a-reaction) to some outburst uttered by a non-journalists in the media bubble. Think: Geraldo Rivera on Trayvon Martin, Rush Limbaugh on Sandra Fluke, and Bill Maher on Limbaugh on Fluke. In other words, in a journalism-free news media, news is most often what Daniel Boorstin famously called a "spectacle" -- events, controversies and scandals almost wholly conjured by the media itself.

The long-term problem for the industry is that events in the real world will inevitably command the audience's attention. Sure, for now it may seem like there will always be a business model for journalism-free media, but when the truly painful effects of, say, global climate change, permanent war, mass poverty and financial meltdown start really shocking large swaths of the American middle class, it will be much more difficult for opinion-only "news" outlets to retain an audience by pretending the incoherent rantings of a talk-radio or cable-TV rodeo clown are a global scandal worthy of 24-7 coverage. At that point, we can legitimately hope that true journalism outlets able to report what's going on will find a huge market -- but that assumes there will be any such outlets left.

Hence, we arrive at the societal emergency. No, it's not that already wealthy media corporations might see big losses from their gamble on journalism-free media - that's an "emergency" only for the 1 percenters in the executive suites. For the rest of us, the real crisis presented by journalism-free news media is the now-imminent potential for a total information vacuum devoid of any authentic journalism outlet. If that happens, we will be deprived of an ability to make informed, preemptive decisions about our world either before crises get worse or during those crises when they happen. Indeed, if "news" is allowed to become pure opinion and manufactured controversy rather than reporting on tangible events -- if journalism is completely snuffed out of the news business -- then we will barely know about the huge happenings that will affect us all.

Yes, we will certainly know why we should love or hate Rush Limbaugh's latest screed, because we will have plenty of opinion-mongers masquerading as reporters telling us what we should think - but we won't know that our city is about to run out of water because the media no longer employs real journalists who can report that story. For the very same reason, we will know how great or how awful we are supposed to think Fox News or MSNBC is, but we won't know of serious economic crises within our midst; we will know why to laugh at a presidential candidate's idiotic gaffe, but we won't know of environmental catastrophes in our backyard; we will know which inane YouTube video has gone most viral, but won't know how many of our fellow countrymen are dying for lack of healthcare.

In short, we will become the "bewildered herd" that Walter Lippmann predicted: We will know only what the journalism-free business model tells us to focus on, without knowing what we should be most worried about.