In Lithuania and Latvia, SS veterans are honored as heroes. What's behind the pro-Nazi sentiment? 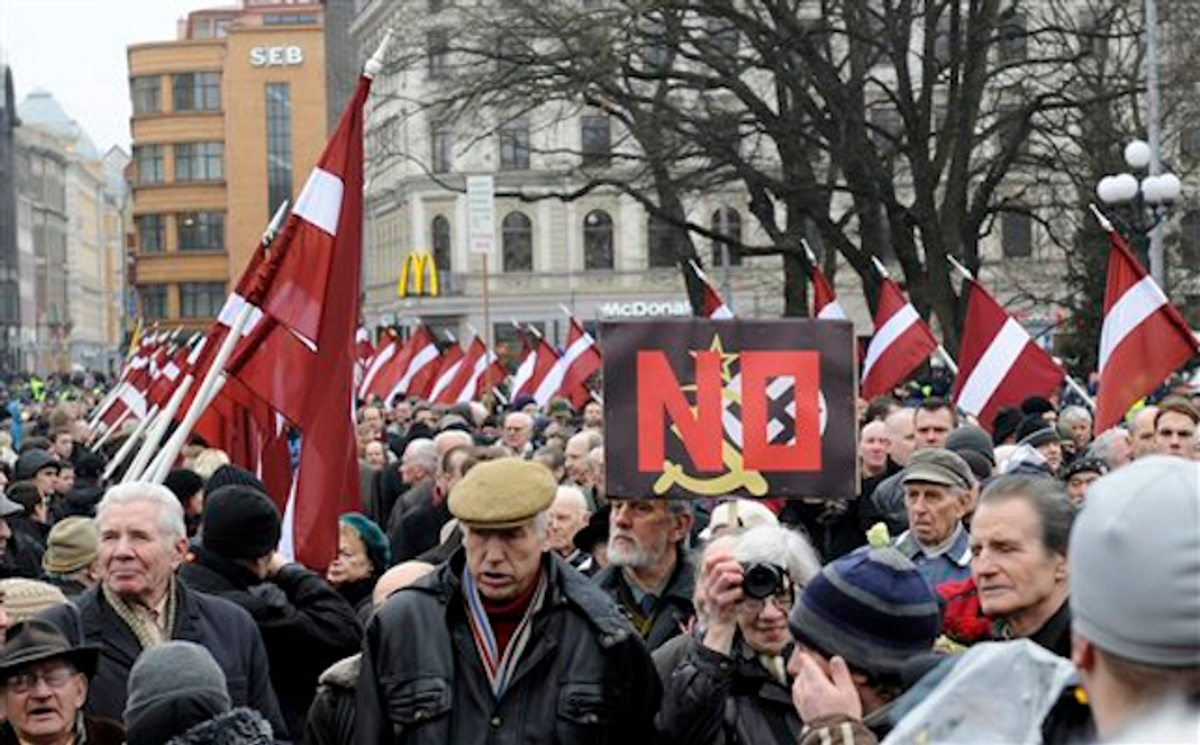 With Latvian flags, people march in a procession to honor soldiers who fought in a Waffen SS unit during World War II, in Riga, Latvia, Tuesday, March 16, 2012 (AP Photo/Roman Koksarov)
--

WARSAW, Poland — In the Baltic States they celebrate their liberation from the Soviet Union in the middle of March.

Winter's worst lies grey on the streets, but that doesn't stop people in Vilnius, capital of Lithuania, and Riga, capital of Latvia, from marching solemnly to honor the heroes who fought vainly to keep the Soviet Union at bay.

Among those who march are groups who honor those who fell wearing the uniform of the Waffen SS, the military arm of the notorious Nazi paramilitary unit. These SS veteran marches are not fringe events. Thousands march and thousands more turn out to cheer them on.

The parades' permits are applied for by members of the governing party in parliament. Marchers are defended by the government.

Latvia's president Andris Berzins reportedly praised the SS veterans on Latvian television last week, "It’s crazy to think they’re war criminals." Berzins added, “Many people lost their lives for the future of Latvia. I don’t see any basis to deny this … it seems to me it’s not acceptable to dishonor these people, before whom we should bow our heads,” he said.

It's not just on Independence Day that the Nazi past intrudes on public life.

In 2008, the Lithuanian parliament passed a law banning the display of Soviet and Nazi symbols.

In 2010, a local Lithuanian court ruled that Swastikas were exempt from that law because the twisted crosses were ‘Lithuania’s historical heritage rather than symbols of Nazi Germany." It would be easier to accept that explanation if the crowds didn't cheer the marchers on with cries of "Juden Raus!" or "Jews out!" as eyewitnesses have attested.

The official tolerance for marches honoring those who fought with the SS is part of a general trend in the Baltic States and all along the eastern borders of Europe: an embrace of a form of exclusionary nationalism that belongs to the 19th century, rather than the globalized 21st. It is the kind of nationalism that underpinned Hitler's theory of "One People and One Reich."

In recent weeks, Latvian voters rejected a proposition that Russian be acknowledged as the country's second official language. Around 27 percent of Latvia's population of 2 million is native Russian speaking. When the votes were counted Latvian president Berzins, said, "An overwhelming majority of Latvian citizens have expressed their unequivocal support for one of the core constitutional values, the national language."

Tensions between Lithuania and Poland are also high over language. Officially, government forms and all shop signs are supposed to be in the Lithuanian language. The largest minority in Lithuania is Polish, around 6.7 percent of the population. There are significant differences in the Polish language from Lithuanian.

Lithuania's Polish minority is demanding the right to spell their names on official documents in Polish rather than in the Lithuanian alphabet. They also want Polish shops to be able to put signs up in Polish. Quantifying the strength of the ultra-nationalists is almost impossible. Dovid Katz, an American scholar based in Vilnius who runs Defendinghistory.com, says it is sizable.

"Ultra-nationalism is a real trend and it's being mainstreamed. Many of its supporters are young and they have dynamism." Katz adds, "It's hard too imagine that these EU and NATO countries are taking up this nativist ideology."

Certainly, the Baltic states' counterparts in the EU and NATO are deeply concerned. On March 11th, the American Embassy in Vilnius backed an alternative parade, "Celebrate Freedom" organized by leading human rights campaigners.

The Council of Europe published a report on the Nazi marches in Latvia in February. It said, "All attempts to commemorate persons who fought in the Waffen SS and collaborated with the Nazis, should be condemned. Any gathering or march legitimizing in any way Nazism should be banned."

The report went on to state that the EC, "cannot but express concern about any attempt to justify fighting in the Waffen SS and collaborating with the Nazis, as it risks fueling racism, xenophobia, antisemitism and intolerance … "

That is the key point. The endorsement of Nazi collaboration by some officials gives encouragement to racists and violent xenophobes. It discriminates against minorities and preserves an official place for the kind of racial hatred which has watered too much of the soil that lies in the land between the Baltic and the Black Sea.

The reason for this resurgence in ugly ultra-nationalism is an unanswered question of history: who was worse, Hitler or Stalin? This may seem like a question for the seminar room, but not here. In the countries between the Baltic and the Black Sea the question is deeply emotional. It has been rephrased this way: Does the blood of someone killed fighting the Soviet Union cry out louder from the grave than someone who died fighting with the Soviets against the Nazis? And what about those who were simply murdered without taking up arms?

In the eastern borderlands of Europe, those deep questions are the meat of politics. When a small group of Lithuania's Social Democrats signed an international declaration in January on the 70th anniversary of the Wannsee conference; when the Nazis initiated the "Final Solution" for Europe's Jews.

The declaration said it was wrong to diminish the Holocaust by saying it was "equal to, similar to or equivalent to" Soviet Communism's crimes. Lithuania's foreign minister, Audronius Azubalis, tore into them, “In essence, this sort of rhetoric by the Social Democrats repeats the Kremlin’s ideological positions, that Stalin is good and Hitler bad. It isn’t possible to find differences between Hitler and Stalin except in their moustaches (Hitler’s was shorter)."

The statement gave offense, but Azubalis was simply playing on a view that is common in the area. Marek Chodakiewicz, Polish-born professor of history at Washington's Institute of World Politics tells an old Polish joke: “Whom do we fight first? Nazis or Communists? Let’s fight the former first: business before pleasure.”

The importance of history

Historians and sociologists around Europe's eastern edge all agree: the basic questions of politics in the area have been settled.

All the countries are ruled by right-of-center governments who buy into free-market economics.

"Ideology does not drive political discussion in Poland. Politicians, journalists, when they get into arguments, it’s about history," says Jan Olaszek, a historian at Poland's Institute of National Remembrance, a government created, quasi-official institution that uses historical research for activist purposes — bringing prosecutions for "Crimes against the Polish Nation."

That view is echoed down the road in L'viv Ukraine. "History is extremely politicized here," says Sofia Dyak, director of the Center for Urban History in Eastern Europe. "History is not an objective study. It is about serving an ideological agenda. It used to be Soviet. Now it is about a nationalist history. So it is used in a highly selective manner."

Things can get very twisted in this highly selective, political use of the historical record. Much of that twisting can be found in the persistence of anti-Semitism in the region. One hundred years ago, the area from the Baltic to the Black Sea was the heartland of world Jewry. Today there are virtually no Jews left. Between 90 and 95 percent were murdered in the Holocaust, those who survived left for Israel, the United States and other countries.

"Lack of Jews is not a problem for anti-Semites," says Polish sociologist Rafal Pankoswki. "Anti-Semites don't need Jews around to hate them." In Pankowski's view, anti-Semitic language, "is a kind of discourse of hostility not just to Jews but to the whole idea of diversity. It is a form of social protest to express anger about things."

Part of the new nationalist mythology is based on old canards. Jews are an international cabal that seek to rule the world. Soviet communism was part of that plot. Marx was Jewish, right? So was Trotsky, so were many of the early Bolsheviks. Even today in Poland, Pankowski points out, liberals have the epithet "zydokomuna,"which means, "Jew communist" thrown at them when they defend anything from gay rights to the European Union.

According to Pankowski, using the word Jew as a general term of abuse occurs most at soccer games. "At matches fans abuse each other by calling each other Jews. At one match last year in Przesow one set of fans unfurled a banner with the slogan 'Death to the Hook-Nosed Ones' written over a stereotyped picture of a Jewish man with a big nose wearing a yarmulke."

Were there any Jews in the stadium?

"No," says Pankowski. "This is how fans act everywhere."

In Lithuania, the explicit connection in many minds between Jews and the Soviet Union is demonstrated in the bizarre case of two elderly Holocaust survivors, Fania Branstovsky, a librarian at the Vilnius Yiddish library, and Dr. Rachel Margolis, a biologist. Both escaped from the Vilnius ghetto during the war. Both joined Soviet-backed partisans fighting the Nazis.

In 2008, when they were both in their late 80s, criminal investigators, in a glare of publicity announced they intended to arrest the pair for war crimes for their alleged participation in an action around a Lithuanian village in 1944 in which civilians were killed. No charges were brought, no apologies were given. Although both women, now in their 90s, are alive to receive such an apology. Whether the ultra-nationalists will continue to assert themselves into national life is unclear.

Dovid Katz notes, "Lithuanian Prime Minister Andreas Kubilius doesn't have a fascist bone in his body." But Katz notes, while many politicians disapprove of the ultra-nationalists they keep silent. "The politicians could easily condemn this. There is a total lack of moral courage."

What is odd about the entrenchment of ultra-nationalism is that the area was always one of shifting national boundaries and mixed populations. Every country in the region has been subject to repeated subjugation to larger countries' imperial designs. The Soviet Union was only the most recent. One hundred years ago none of these countries were independent either. They were subject to Russian, Prussian and Austro-Hungarian imperial hegemony.

Many historians and politicians in the region constantly remind western visitors that their newly liberated nations are only just being allowed to go through historical processes America and western Europe went through in the 18th and 19th century.

Professor Marek Chodakiewicz says, "The people of the Intermarium, the lands between the Black and Baltic Seas, were frozen in the Soviet totalitarian iceberg for 50 to 70 years. Now they are finally free to kvetch. And kvetch they do. It is a necessary, therapeutic, and cathartical exercise. Without coming to grips with the past, there is chaos." But it's a question of how you come to grips with the past.

To paraphrase George Santayana, "Those who cannot remember the past accurately are condemned to repeat it."