As operatives work to sugarcoat his legacy, the former president keeps quiet on the election 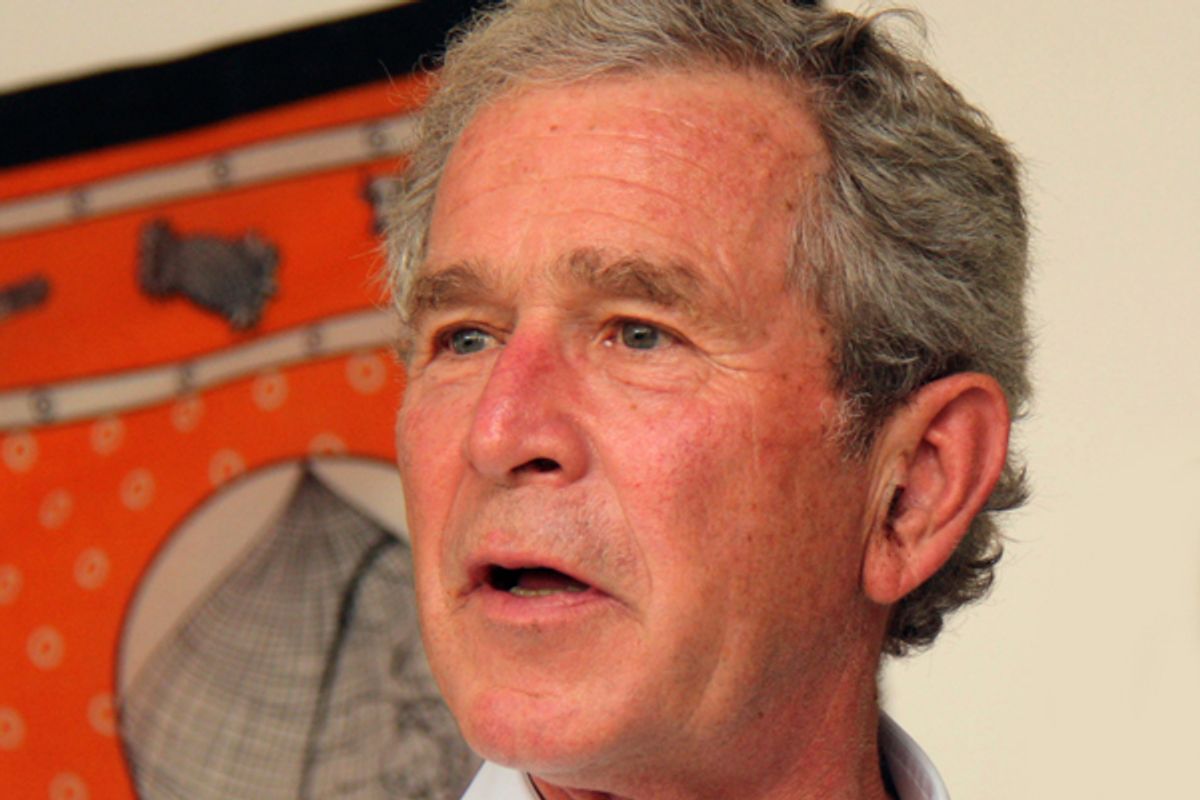 Politico today asks the question America has not thought to ask: Where is George W. Bush? (He is in Texas getting ready to watch some college hoops, most likely.) (Or he is out making $150,000 for one speech to some organization with too much money to burn.)

The former president hasn't really said or done much in terms of "politics" since he left office the day before Barack Obama made all the jobs disappear and gas prices rise. He hasn't weighed in at all on the election that is going on right now, even as his former president father and former governor brother have done the responsible Republican thing and endorsed Mitt Romney. (George H.W. Bush even went to the trouble of endorsing him twice, because no one noticed the first time.)

Why is that? Well, for one thing, Bush knows that his endorsement wouldn't really help anyone, because no one likes George W. Bush. But he also seems to have the idea that a former president should elevate himself above partisan squabbling and spend his days making a fortune on the speaking circuit and raising money for his library instead of still being active in electoral politics.

The article showcases the two competing and hilarious post-Bush narratives that allow prominent Republicans to absolve themselves of responsibility for an eight-year-long disaster: That Bush is misunderstood and will eventually be vindicated by history, and that Bush and Bush alone is responsible for ruining the Republican "brand."

Mark McKinnon and various unnamed "former Bush aides" defend the Bush legacy. Other Republicans, who tirelessly defended Bush at the time, have now decided that Bush's crime -- the crime of all Republicans who leave the country worse off than they inherited it -- was straying from the True Conservatism, and they tend to act as if the majority of the part's representatives in Washington were possibly very sleepy or under deep hypnosis for most of this century's first decade.

Romney rarely talks about Bush on the campaign trail, save for the day he received Florida Gov. Jeb Bush’s backing. That day, Romney gave a full-throated defense of the Troubled Asset Relief Program, the widely-unpopular bank bailout that was approved in the waning months of the Bush White House. Rick Santorum has repeatedly apologized for voting for Bush’s signature education plank, “No Child Left Behind.” The prescription drug benefit that Bush spearheaded in 2003, an entitlement program that has added to the national debt, was another vote that Santorum has disavowed.

Meanwhile, former Bush operatives are furious that Democrats are still "running against Bush," simply because he bears a great deal of responsibility for everything from the state of our economy to our endless bloody foreign occupations to the intractability of the national debt. So people like Ari Fleischer never miss an opportunity to point out how noble their old boss is being in not defending his indefensible legacy, and then they lie about very recent history. Bush, after all, was one of America's finest non-Reagan presidents:

The aide added, “That won’t be lost on historians, but the important thing is the lesson that laying out big ideas and tackling our biggest problems is the best way to win elections. Good policy is good politics, even if takes a long time to realize the benefits.”

“President Bush read three books about George Washington during his last year as president. He said that if historians were still analyzing the first president, then the 43rd didn’t have a lot to worry about because he would never know how history would view his presidency.”

Of course, this all comes back to the fact that Bill Clinton is an asshole. At least Bush isn't being like Clinton, going around trying to still do things and accomplish stuff!

Republican strategist Scott Jennings, who served as Bush White House deputy political director, said Bush’s detachment is a testament to his lack of “any insecurities that need to be salved by injecting himself into a presidential primary.”

Bush, after all, cited Harry Truman as an example of a president whose reputation improved over time — not thanks to continued involvement in politics, but rather because his record looks better in the rear-view mirror.

“I can’t recall many examples of a president getting involved with the exception of the narcissistic Bill Clinton, who, after serving two terms as president, is still nursing self-esteem issues and has some bizarre need to be known as a political operative,” Jennings said. “I think the view of President Bush’s term in office will improve over time, but I don’t think he has to interject himself into presidential campaigns now or in the future to get that legacy bump.”

Part of Bush's reluctance to still engage is politics is probably also driven by the myth that old classless Bill Clinton was an asshole to both Bushes who held office before and after him -- the old "W's" removed from the keyboards lie -- and so Bush taking the high road and not attacking his successor is a sort of passive-aggressive WASPy demonstration of moral superiority. But the former president might also just sort of like and respect the current president!

This article is a reminder, though, that we must be ever vigilant when it comes to defining the Bush years, because there are plenty of elements in the GOP who are itching to pull another Reagan and turn a terrible president into a secular saint. So never forget: The Bush years were mostly about lies, war, torture, and the time Dick Cheney shot an old man in the face.