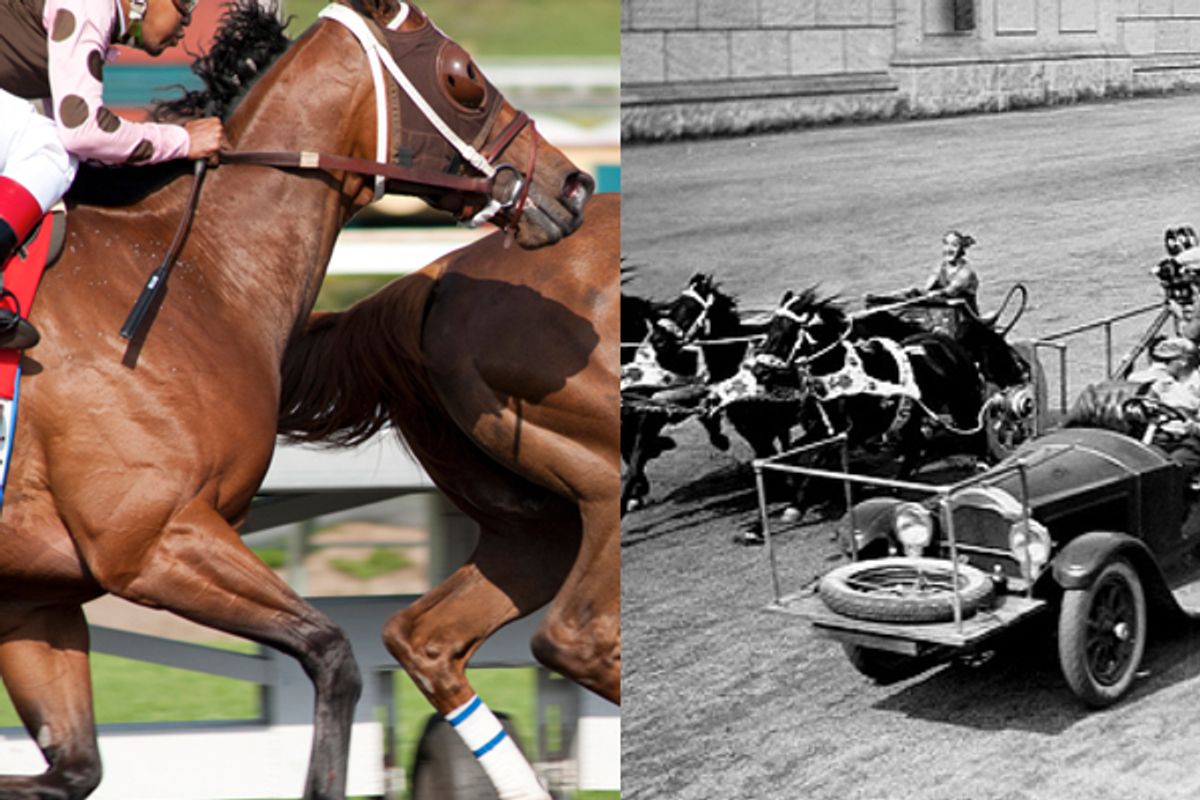 When HBO's "Luck" was canceled after a third horse died during production, it was natural to ask what was going on. Were animals being abused? Were people being careless?

The truth was nothing was that simple or savage. Apparently the horses were being treated well, with greater care than actual working racehorses. The third horse was reportedly in good health and high spirits the day it died. It was in such spirits that it reared up as horses sometimes do. This time it fell over backward, and landed on its head. Just an accident. All you can blame is the fragile frame of the thoroughbred horse, which was created for racing.

But that didn't keep the show from being canceled – or critics from speaking out. Even before the third horse death, PETA charged that “two dead horses in a handful of episodes exemplify the dark side of using animals in television, movies, and ads.” Like all filming in the U.S., "Luck" was shot under supervision of the American Humane Association's Film & TV Unit, the people who certify that “No animal was harmed in the making” of a film or TV show. (That's a statement about animal welfare, not animal rights. If you don't think animals should be filmed for entertainment at all, you're not going to like AHA. Founded in 1877, it also promotes the welfare of children.)

Moreover, this latest incident shows just how much the treatment of animals has changed in Hollywood since the motion picture industry began.

The early days were rough. Take Thomas Edison's elephant electrocution as a starting point. Topsy, like the producers of "Luck," was charged with causing three deaths. The third was a cruel trainer who tried to feed her a lighted cigarette. Naturally, she killed him. Edison electrocuted Topsy with alternating current to show how dangerous it was, part of his feud with Nicola Tesla, and released "Electrocuting an Elephant" (1903). This seems unfair and crass to most people today, but the idea was to find the most merciful way to kill Topsy.

Beginning in the 1920s the motion-picture industry boomed, developing new genres as it went. In those days you could do almost anything to an animal (or an actor, for that matter). As many as 100 horses died in the making of the 1926 version of "Ben Hur." Early Hollywood was an anarchic world, with upstart production companies launching grandiose projects on every side. Filmmakers did whatever struck them as a great idea.

With the advent of sound in 1927 profits took off. The studio system arose, concentrating filmmaking in a handful of dictatorially efficient corporations employing thousands and turning out movies at a tremendous rate. Animal actors were part of the process. Dramas, comedies, adventure stories, musicals, biographies – all would use animals, but the genre that used the most was the western.

The popularity of westerns was particularly hard on horses. Westerns were a staple in '20s and '30s Hollywood, and then boomed in the 1940s. In the early days, people were more familiar with horses, more attuned to the dangers of a runaway team, or the dangers of a horse and rider falling. Directors showed lots of falls. They used pitfalls, or tripwires to make horses fall, and there were also some stunt horses, who would fall at a signal. Trained horses jumped through windows or through flames. They leapt over wagons. They rampaged through saloons. All this was at the regular cost of injury or death.

Sometimes individual horses became known, and they were protected because of their fame, and because the actors loved them. Western star William S. Hart had a famous pinto, Fritz. Beautifully trained, Fritz would fall on command, lie down to act as a shield in a gunfight, even play scenes with a monkey. "Singer Jim McKee" (1924) had a scene in which Hart rode Fritz off a cliff into a gorge, but the actor didn't want to risk Fritz, or a stunt horse, so a fake Fritz was constructed. Hart was filmed galloping to the edge on Fritz, at which point, on cue, the horse did a fall to one side. Then he was led away and replaced by the fake Fritz, held up with wire. When the wires were cut, the two toppled into the gorge. Hart was “badly shaken” by the fall, wrote Petrine Day Mitchum in "Hollywood Hoofbeats," but once edited, the footage of falling man and “horse” was chillingly spectacular – so much so that the Motion Picture Producers and Distributors Organization, aka the Hays Office, called Hart in to explain why he had been so cruel to Fritz.

Fritz was one of the exceptions to the rule. Most Hollywood horses were less famous, less recognizable, and often disposable. In 1939 two horses were killed in the filming of "Northwest Mounted Police" and two more in "Jesse James." The horses in "Jesse James" were wearing movie blinkers with eyes painted on them. Unable to see, the horses had no idea they were running off a 75-foot cliff over white water until it was too late. The footage was impressive, the stuntman was well-paid, and the horses were dead.

This was the single biggest turning point in the history of Hollywood's treatment of animals. Word about the deaths got out and there was a tremendous furor. In reaction to the outcry, the Hays Office worked with the AHA to write guidelines for animal performances. Starting in 1940, the AHA was granted access to sets. The Hays Office, well known for prissy extremes such as insisting that marital bedrooms feature twin beds and that Betty Boop dress more modestly, also banned apparent animal cruelty. Films were submitted to the office before release to get a certificate of approval and often changes were demanded before a certificate was issued.

In 1968 the Hays Code was dumped, mostly because it was ridiculous. Now you could have actors curse. You could ridicule the clergy. Married couples could be shown in the same bed. It was good news for the movies, but not for animal welfare. The end of the Hays Code contributed to the rise of the New Hollywood, a golden age of moviemaking. Younger filmmakers were creating realistic and daring movies, with more subtlety and less dependence on formula, contributing to a cinematic renaissance and a move toward realism and location shooting -- and, sadly, more problems with animals.

“Through the final days of the '60s and then into the '70s, it was bleak. We were banned from film sets. There was a push for a gritty realism in those days in filmmaking. And they didn't like to be told they could or could not do something with animals,” says Karen Rosa, vice-president of the AHA's Film & TV Unit. She calls those “the dark days.” Because the AHA wasn't on set, they couldn't prove that two mules were killed on the Spanish set of "Patton" (1970), in a scene in which Gen.Patton shoots two mules blocking a bridge, but throughout the 1970s, the AHA's list of “unacceptable” movies cites a litany of “animals killed for entertainment,” “horses wire tripped,” “mistreatment of animals,” and “live snake sliced into pieces.”

Gritty realism produced two of the most notorious animal welfare abuses in Hollywood history: In "Apocalypse Now" (1979), a real water buffalo was slaughtered with a machete (though it has been claimed that the buffalo was going to be slaughtered in this manner anyhow), and although the movie got great reviews, it caused a lot of upset. Before it was released in the U.K., the RSPCA protested that it violated the Cinematograph (Animals) Act.

"Heaven's Gate" (1980), the notorious flop, came out a year later -- such an expensive failure that it put United Artists out of business. It wasn't a good gig for animal actors, either. Chickens died in staged cockfights. A horse was killed in an explosion. Horses were killed or injured in a battle scene. Other horses were allegedly bled to provide gore for humans to be smeared with. It was also claimed that cattle were killed and gutted so their innards could double for those of human actors. The AHA, which hadn't been allowed on the set, led a boycott of the film, with picket lines. The boycott was taken up across the U.S. by local humane groups -- and this time there were no voices sticking up for the artistic merit of the film.

Once again public anger led to sweeping changes. The Hays Code didn't return, but AHA monitors came back on sets through a contract with the Screen Actors Guild (SAG) and Association of Motion Picture and Television Producers (AMPTP) and the “No animals were harmed ...” disclaimer came into being. Importantly, these inspectors gained significant independence from the industry itself. The AHA Film & TV Unit isn't paid by the individual producers of film and TV shows, but gets most of its budget from a yearly grant from the Industry Advancement and Cooperative Fund (IACF).

In 1988 the AHA published a set of guidelines for film and TV production. Since then, they say, the incidence of accidents, illnesses and deaths of animals on sets has sharply declined, although there are still occasional violators, especially when filming takes place overseas (some of Werner Herzog's films, which often include scenes of simulated animal cruelty, have aroused suspicions). Before production even begins, the AHA reviews scripts, looking for potential problem situations, and advises the producers on how to handle the animal action they plan. The disclaimer has become a part of popular culture. Frequently mocked, it has probably also created a widespread awareness of animal welfare as a significant issue. (But see YouTube for counter-examples. No, I'm not going to give URLs.)

AHA's guidelines evolve, sometimes in the light of new research, sometimes in the light of experience. “There was a time when we allowed tranquilization for the sake of entertainment, as long as it was done by a licensed veterinarian, as long as the the veterinarian stayed present,” says Rosa. But on a film shoot in the late '90s a bird was tranquilized on a set. “It was very warm ... and the bird didn't make it. We just said, you know what? No.” The guidelines were changed.

There have always been people in Hollywood who care about animals and want to see them treated well. Now they know they can call in the AHA. On the set of "Horse Whisperer" (1998), a distressed crew member collared the AHA monitor. A horse with a bloody wound, she reported. In the corral! Nobody even seems to care! They went to the corral. There stood a horse with a bloody wound. And on the far side of the corral were four similar-looking horses. Each had an identical bloody wound, all superb examples of prosthetics.

Animal actors today have it cushy compared to the early days of Hollywood. AHA doesn't have to look out for tripwires or pitfalls. “We want to make sure that they're not stressed, and they're well rested,” says Rosa. “I read these articles about horse racing and they're talking about levels of drugs in the horses' systems. We wouldn't let the horse run even three-eighths of a mile for filming with drugs in its system.”

After the second horse died during "Luck's" shooting, the AHA increased its precautions. They insisted that a second, independent vet do health checks on the horses on the days they were to perform. They demanded X-rays of the horses' bones to check for unsuspected weaknesses. They asked Rick Arthur, a veterinarian and director of the California Racing Board, to review their protocols. “I thought they were actually very good precautions,” he said. “They were greater than those ordinarily found on the racetrack, and they were greater than those on any filming previously.” But horses are prone to do silly things, he says. Like rearing up and falling over backward.