The beef product processing industry is in a world of pain. Another scalp for social media? 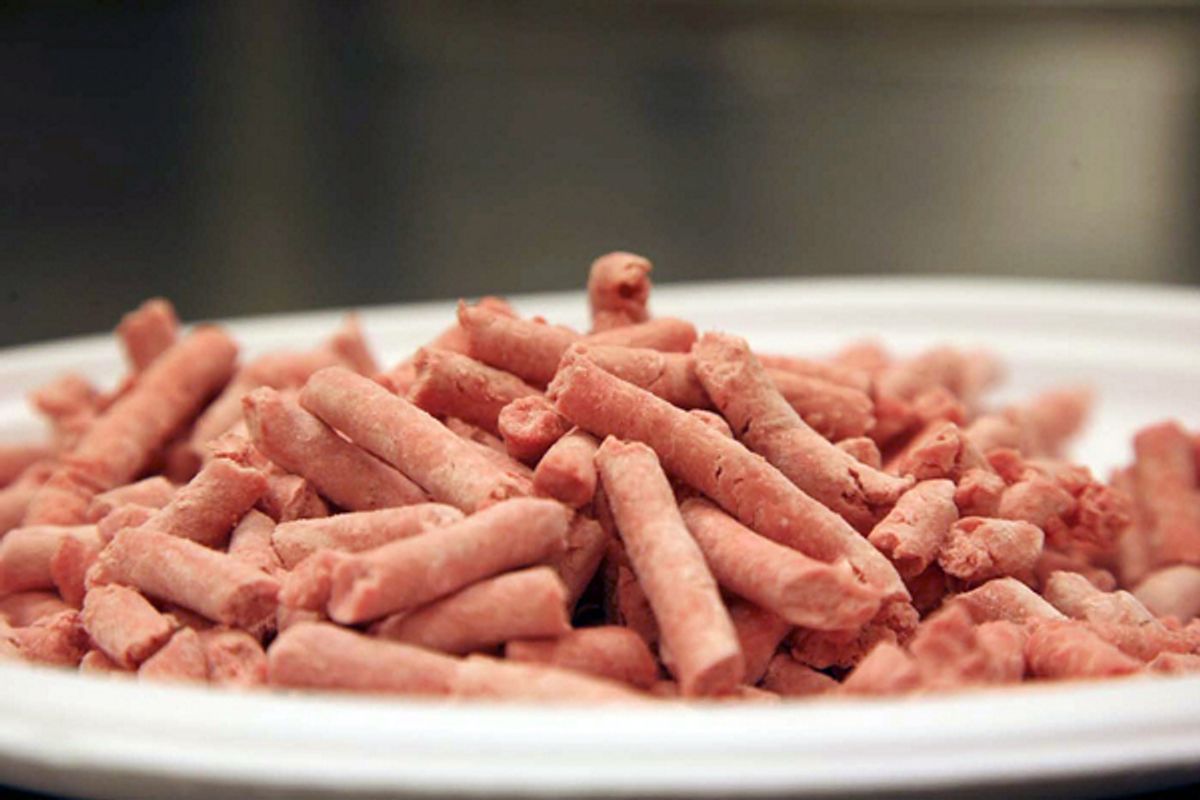 The battle over "pink slime" is getting messier. Blaming an "unfounded public outcry over the use of boneless lean beef trimmings" in the nation's commercially sold ground beef supply, meat processor AFA Foods Inc. filed for Chapter 11 bankruptcy protection on Monday. Beef Products Inc. -- the South Dakota-based meat titan that invented the pink slime manufacturing process -- is also reeling, idling plants in multiple states. In response, Iowa Gov. Terry Branstad, a politician who hails from a state where there is a whole lot of boneless beef extrusion going on, called for a congressional investigation into the causes of the public uproar.

"We have a smear campaign going on against a product that is healthy and safe," Branstad said. "If they get by with this, what other food products are they going to attack next?"

Score another scalp for social media. Because when Terry Branstad inveighs against "they," that's exactly who he's talking about: the easily outraged masses of Twitter and Facebook. We've known about "pink slime" for years. Food Inc. took us into a Beef Products Inc. factory and showed us the repulsive stuff back in 2008. The New York Times referenced the name (coined by a USDA researcher as far back as 2002) and devastatingly punctured the safety claims in a breakthrough piece of reporting in 2009. Celebrity chef Jamie Oliver blasted it on his reality TV show a full year ago.

But only in the last few weeks has pink slime captured the national consumer consciousness, and in doing so provided us with just the latest example of how quickly social media grass fires can become conflagrations with real dollar-and-cents consequences. On March 5, the Daily reported that the USDA was holding firm to its plans to buy 7 million pounds of pink slime for its national school lunch program. The very next day Bettina Siegel, a blogger who writes extensively about food and kids, created a petition on Change.org titled "Tell USDA to Stop Using Pink Slime in School Food." Within a week the petition had over 200,000 signatories and an Internet frenzy had been born.

Fox News columnist Dan Gainor would have us believe that the real villain here is ABC News, which jumped on the anti-pink slime bandwagon with particular passion, but make no mistake, "pink slime" is a semantic framing that was born for the Twitter era. When you have only 140 characters to spread the news, "pink slime" packs all the wallop you need. The process itself, in which fatty trimmings left over at the slaughterhouse are heated, disintegrated via centrifuge, and then dosed with ammonia, is easy to express in a simple Facebook illustration. We saw it with Susan G. Komen for the Cure and we saw it with SOPA -- when the social media masses get a bee in their bonnet, they can't be stopped.

Certainly, the beef industry knows whom it is blaming.

From the Kansas City Star:

The outrage over pink slime registered the sort of quick and virulent response that seems to characterize a new media age. Janet Riley, spokeswoman for the industry group the American Meat Institute, said she’d never seen anything like it -- not with E.coli outbreaks, passing worries about so-called mad cow disease or sundry health studies.

“It’s been a social phenomenon,” she said. “Twitter just made it crazy.”

The beef processing industry is trying to fight back, with websites -- Beef Is Beef, Pink Slime Is a Myth -- and even a catchy slogan, "Dude, it's beef." Pink slime contrarians are also eager to point out that if we want low prices for our burgers and "efficient" use of our beef resources, we should learn to embrace pink slime. But I suspect that the defenders of "lean, finely textured beef" are unlikely to see a social media wave of support break in their favor.

I may be the wrong person to make this argument, as I am a Berkeley, Calif., resident who feeds his children hamburgers made from grass-fed cows raised in Marin. But the questions of whether "pink slime" is safe or efficient or guarantees us low-cost patties are all beside the point. It is impossible to look at the beef trimmings being transformed into pink goo in "Food Inc." without being revolted. And when American consumers are revolted, they don't reach for their wallets. Gov. Rick Perry can warn all he wants about how "social media rumors" and "hysteria" threaten to destroy any industry. Maybe that's even true. But it's not social media's fault that pink slime is getting a bad rap. It's the inherent disgustingness of the process that deserves the blame. When you see it, or think hard about the process that creates it, you just don't want to eat it.

What's amazing about the current social media revolution is that it is bringing to pass something that food activists have been dreaming about for decades: If only consumers were more informed about the nature of the industrial food system, they would change their behavior. Well, guess what, with a little help from grass-roots viral marketing, the activists turn out to have been right.