The evolution of the Hawaiian cotton tree 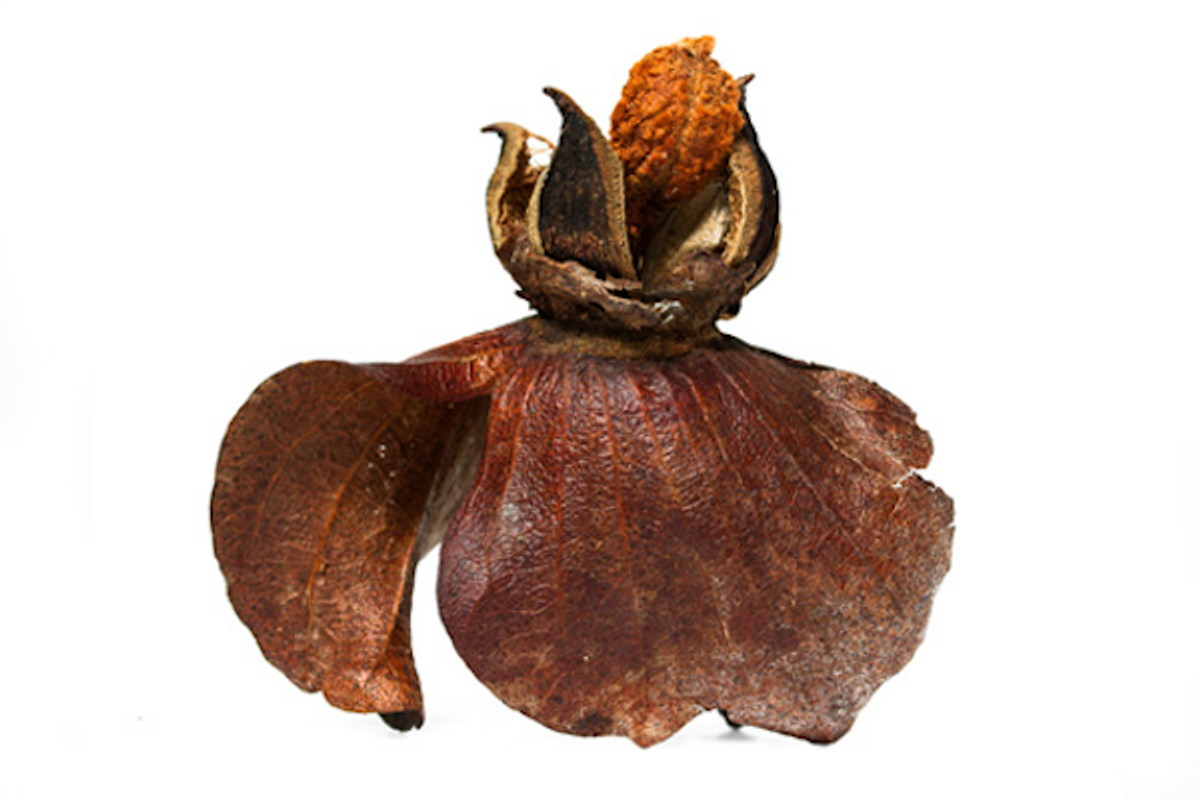 This article originally appeared on Imprint as part of Anna Laurent's Botany Blueprint series, a project dedicated to examining the form and function of seed pods.

Since evolving on Hawaii, Kokia drynarioides has worn her fruits like a shawl of baubles. Each arrangement contains five seeds, all of them cut with two facets and a golden-red radiance, and every piece mounted to a strong, flared calyx. As she ages, the settings become weathered. And, supporting the heavy jewels requires no small amount of energy―either way, the tree is old, and she is ready to let them go. The capsule's prongs widen and loosen, and the plush seeds are released.

For many millennia, the seeds would disperse, and the tree flourished. Kokia drynarioides is hardy, and it evolved with the island. It adapted to the dry, nutrient-depleted soil on Kona's lava fields, and developed a symbiotic relationship with its primary pollinator (the flower's nectar pools at the bottom of an angled blossom that is perfectly designed for the curved beak of the Hawaiian honey-eater). And its seeds are thought to be well-suited for island hopping; called the Hawaiian cotton tree, its seeds are similar to most cottons, in that they can float for several days before the fibers become heavy with water, which is long enough to disperse throughout the islands by oceanic drift.

Today, the environment with which the species evolved has changed, and Kokia is nearly extinct in its native habitat. As of 2010, fewer than six individuals were counted in the wild. Its environmental pressures are numerous. Most notably, two introduced species have reduced populations. First, a wild grass that covers the lava fields, inhibiting Kokia growth and increasing the frequency of wildfires. Second, a species of arboreally agile rats, introduced in the 1800s, will climb the trees and eat the seeds right from the branches. Those seeds that do survive the rat and maneuver around the fountaingrass, successfully germinating into saplings, are gobbled up by grazing cattle and goats. Not only is it endemic to Hawai'i, its population is limited to one area on the leeward side of the Big Island.

Botanists are monitoring populations and making lists of what to do, with emphasis on seed dispersal studies, about which little is currently known. Initiatives to cultivate the tree have been underway since the early 1900s, when botanists first recognized the tree's critical status. Seeds were collected seeds and dispersed to gardens and arboreta. Today, the Amy B. H. Greenwell Ethnobotanical Garden, in Kona, is Kokia's primary island caretaker. Horticulturalists have cultivated several individuals that grow alongside the native poppies, Koa, and taro. One tree was fruiting when I visited, and the Garden's director allowed me to inherit her jewels.