The problem for Wisconsin Dems

Former Rep. David Obey talks to Salon about the primary that threatens the party’s recall push 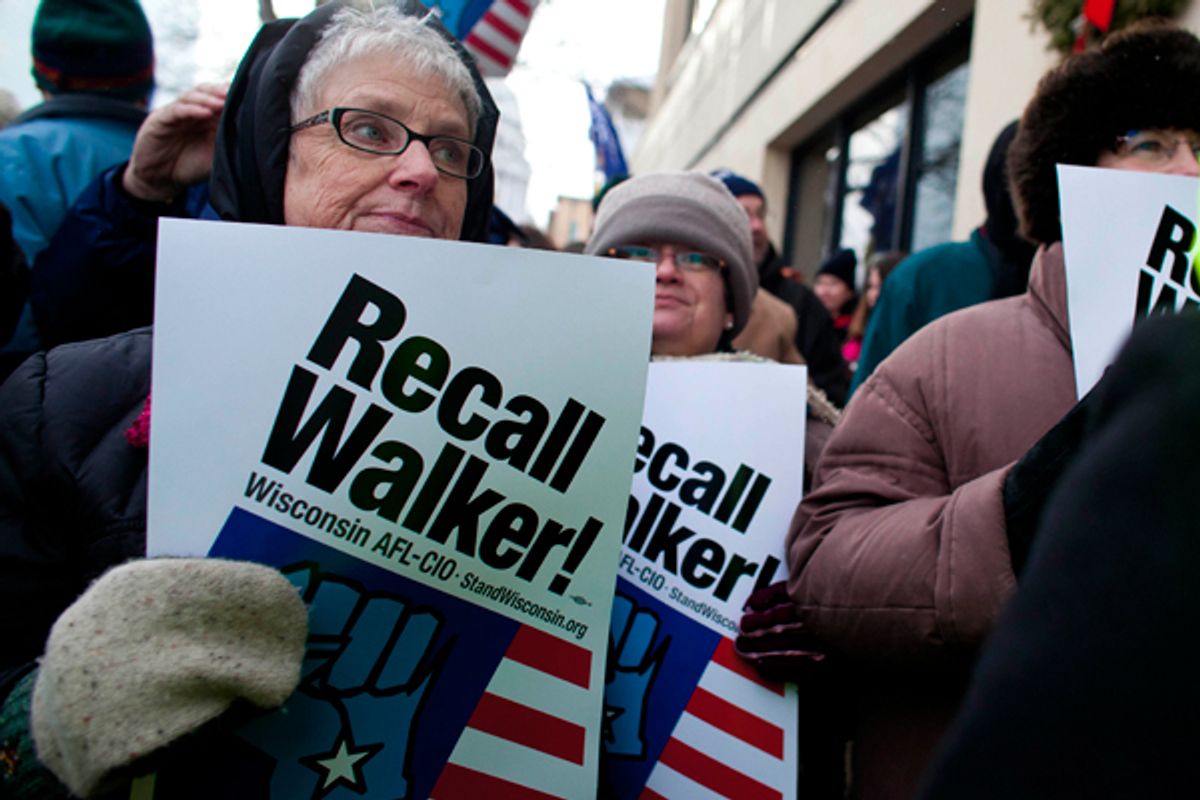 David Obey doesn’t seem too happy that there’s going to be a competitive Democratic primary in his home state.

“We are where we are, and we have to deal with it,” the former Wisconsin congressman, who for decades before his 2010 retirement was one of the leading voices on Capitol Hill for economic and social justice.

Walker will now face the voters on June 5, with polls showing the state’s voters split almost exactly down the middle on whether to retain him. But it’s far from clear who his Democratic opponent will be, thanks to the other big news last Friday: Tom Barrett, the mayor of Milwaukee and Walker’s opponent two years ago, is running again.

Barrett has been seen as a potential candidate since the recall push began more than a year ago, and his broad name recognition and credible showing against Walker in ’10 (Barrett lost by five points in what amounted to an impossible political climate) make him a logical option for Democrats. But his own political situation in Milwaukee, where he’s expected to easily win a third mayoral term on Tuesday, led him to put off making any public moves until last week.

With Barrett on the sidelines, Kathleen Falk, the long-serving executive in Dane County, the second most populous county in the state and the home of Democratic-rich Madison, spent the past few months making noise, raising money and – most importantly – benefiting from a massive television advertising campaign underwritten by a labor-backed group, Wisconsin for Falk. Polls earlier this year showed Falk running far behind Barrett in a potential primary match-up. But the latest survey, released just before Barrett jumped in last week, put her just seven points behind him, 36 to 29 percent.

The Democratic primary will take place on May 5, and the nightmare scenario for Democrats is that a heated Barrett-Falk contest will drain resources, divide key party constituencies, and distract attention from Walker. Two other candidates, Secretary of State Doug La Follette and state Senator Kathleen Vinehout, are also running but are barely registering polls.

To Obey, there’s a risk that Democrats are taking their eye off the ball. For all of the outrage that Walker and his Republican allies stoked when they went to extraordinary means to strip public employees of many of their collective bargaining rights last year, the state’s voters seem to approve and disapprove of their governor in roughly equal numbers.  Plus, there are voters who just don’t like the idea of recalling a governor, and while Wisconsin is known for its rich progressive tradition, Obey is quick to note that, “It’s the state that produced Gaylord Nelson. It’s also the state that produced Joe McCarthy.”

Democrats, he warned, “need to understand that this is not going to be a cakewalk. This is a very uphill fight.”

This sounds a little like an argument for Barrett over Falk, who is less well-known statewide and whose likability score is substantially lower than Barrett’s, at least for now. There are those who believe that her close identification with the state’s most liberal region would make her an easier mark for Walker and the GOP. Obey says he’s going to make a formal endorsement in the next few days, and that “you’ll have to reach your own conclusion for the moment.”

Falk’s surge in support has been about more than just Barrett’s absence from the campaign trail. It also speaks to organized labor’s profound skepticism, and even hostility, toward him, which is rooted Barrett’s decision as mayor to use the collective bargaining reforms implemented by Walker to impose $25 million in cost-sharing on municipal employees.

To the labor groups that have poured money into the pro-Falk effort – including AFSCME and the state’s largest teachers’ union – this makes Barrett an unacceptable nominee. Others cite a pragmatic concern: Won’t his Milwaukee record make it easy for Walker to throw any criticism of the collective bargaining law back in Barrett’s face?

Obey calls this a “very misleading conclusion,” noting that Barrett is also pledging to do away with Walker’s collective bargaining law and that “all of the Democratic candidates have roughly the same view” on the issue.  And anyway, he says, the public anger that’s driving the recall effort is bigger than the issue that initially spurred it.

“It’s far broader. The collective bargaining issue is very important. But the problem isn’t just what he’s done and what the legislature has done – it is the way they have done it.”

Obey himself was talked up as a potential candidate for a while. He considered running, he now says, “only in my worst moments” and decided not to because of “common sense” – he hates dialing for dollars, and managed to avoid it for most of his 41-year congressional career.

Even though that career took him to a top position in the House – chairman of the Appropriation Committee – Obey was always known for keeping close tab on his home district and state, something that remains true now. While a serious Democratic primary is apparently unavoidable, he expressed hope that the unusual nature of the election will make it easier to heal any wounds.

“Governor Walker is simply hoping that the voters of Wisconsin will have the attention span of a cocker spaniel,” Obey said, “and that they’ll forget the abusive style he has brought to government.”