"The Queen and the Maid": Joan of Arc's secret backer 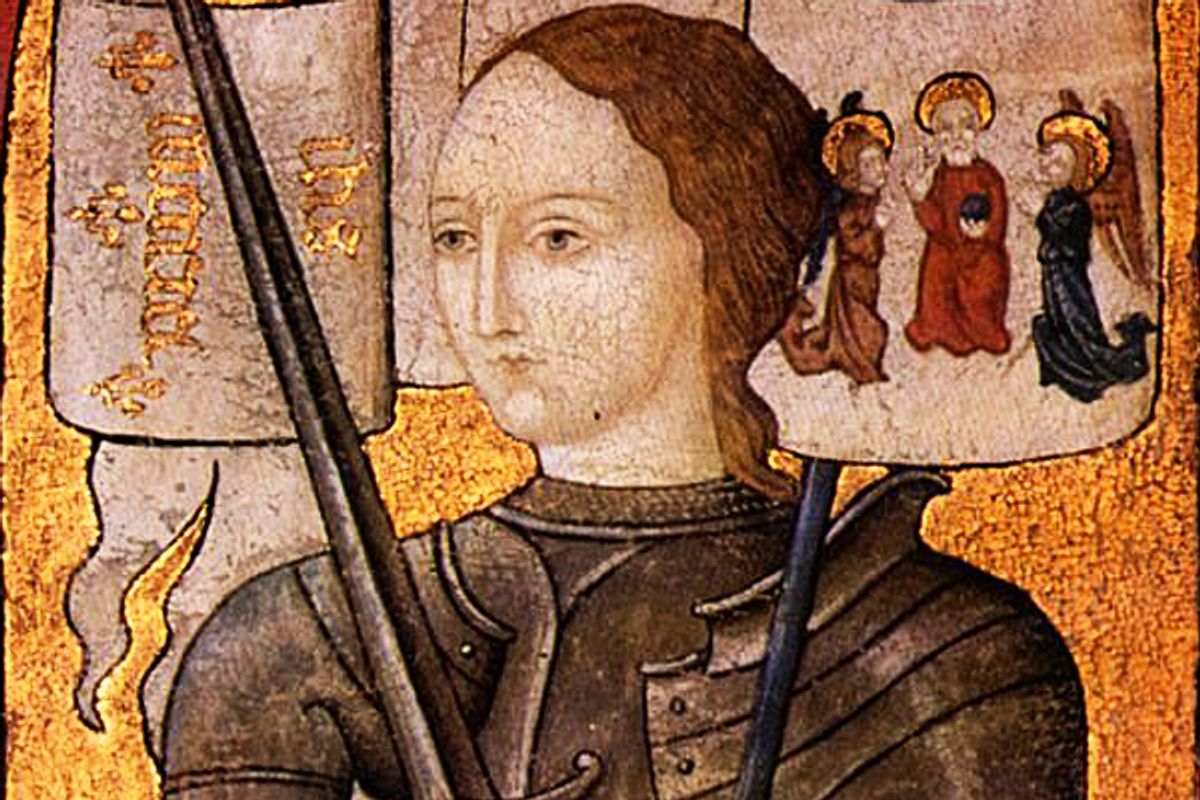 Attention, "Game of Thrones" fans: The most enjoyably sensational aspects of medieval politics -- double-crosses, ambushes, bizarre personal obsessions, lunacy and naked self-interest -- are in abundant evidence in Nancy Goldstone's "The Maid and the Queen: The Secret History of Joan of Arc." Goldstone's premise, innovative but not outlandishly so, is that Joan's rise from poor, illiterate farmer's daughter to mystical champion of French nationalism during the Hundred Years' War was largely orchestrated by Yolande of Aragon. Yolande, who was the Duchess of Anjou and Countess of Maine as well as the Queen of Aragon (among other titles), was also the mother-in-law of the dauphin, Charles, whose military triumph over the occupying English and coronation in Reims were the two great causes espoused by the saintly, if warlike, Joan. As Goldstone sees it, Yolande's political genius goes under-recognized.

"The Maid and the Queen" describes two ways exceptional women found to exercise power in the Middle Ages. Yolande -- who ran Aragon while her husband (and, later, her son) pursued a fairly hopeless claim to the throne of Sicily -- raised money, sponsored advisors, negotiated strategic marriages and otherwise worked, often indirectly, to further the interests of her six children. She backed the Armagnac side in the protracted French civil wars that weakened the country to the point that Henry V and Henry VI of England found it ripe for the picking. The other side, the eel-like Burgundians, formed on-again, off-again alliances with the limey invaders.

Charles, who became dauphin (heir to the French throne) only after his four elder brothers died, had gone to live with Yolande in her castle at Angers at age 11, when he was betrothed to her daughter, Marie. His father was intermittently mad (a situation that led to much of the chaos in France) and his own mother was so self-serving that eventually she repudiated him as the illegitimate product of an adulterous affair in order to appease a more useful ally. (Goldstone finds persuasive proof of his legitimacy.) Charles called Yolande his "Bonne Mère" (good mother) and, as Goldstone writes, "became very attached to her, relying on her judgment and reflexively turning to her in moments of distress. No one had more influence with Charles than Yolande."

Nevertheless, after Charles' father died, Yolande's sway was eclipsed by that of avaricious Georges de la Trémoille, grand chamberlain, whose interest lay in, as Goldstone puts it, "undermining the king's confidence as a means of controlling him and enriching himself as much as possible." A major military defeat against Henry V spooked Charles, and he became obsessed with his disputed legitimacy and the possibility that God had thwarted him because he was not, in fact, the rightful king. As he tarried, the English solidified their base in northern France. Yolande raised and funded a substantial army, but she still couldn't get her lily-livered, self-doubting son-in-law to fight.

Goldstone believed that Yolande's extensive network of spies and contacts -- particularly her youngest son, Renè, who was in line to become the Duke of Lorraine -- notified her when a teenage peasant girl from the northern village of Domrèmy (on the border between Lorraine and Champagne) developed a following. In a touch right out of a J.J. Abrams series, there was a well-known prophecy, first circulated by a Provencal seeress, that "France will be lost by a woman [Charles' profligate and unpopular mother] and shall thereafter be restored by a virgin." No one believed in Charles more than the charismatic and manifestly pious Joan, who treated his coronation and rule as sacramental.

Like medieval churchwomen with more conventional careers, Joan wielded an authority rooted in both her chastity and her claim to a hot line to heaven -- in Joan's case, the voices of the saints who directed her actions and promised success to Charles. (When she was finally captured by French allies of the English and subjected to a kangaroo trial for heresy, the question of whether, by wearing men's clothes, she had behaved "immodestly" was given great weight.) At her famous meeting with the dauphin in 1429, Joan was said to have delivered an unspecified "sign" to Charles, confirming her holy status. Goldstone believes that she simply addressed his most corrosive, secret anxiety by immediately assuring him that she had been sent by God to verify his legitimacy and help him retake his kingdom.

Historians differ on how much military authority Joan exercised over the next year and how effective that authority was. But there is no doubt that her symbolic power was immense; she transformed a grinding dynastic squabble into a holy war in the eyes of French commoners, who had previously had little reason to side with any of the aristocratic combatants. Her valor in the heat of battle rallied flagging French troops again and again, above all in the raising of the siege of Orleans, a huge morale booster for Charles loyalists. The retrial that overturned her conviction for heresy 25 years after her execution became "a collective catharsis staged at the national level, in which not only Joan but the entire French population achieved redemption," Goldstone writes.

Because so much of this material is familiar, delivery becomes a crucial factor in any popular history of these events. Goldstone's is vigorous, witty and no-nonsense in the tradition of the late, great popular historian Barbara Tuchman. She registers moral disgust at the Burgundian lackeys who tormented and killed Joan of Arc, as well as pragmatic admiration for the campaign-trail chops of Yolande and her mother-in-law, Marie of Blois, who knew that the best way to consolidate support in your son's or husband's duchy was to travel from one provincial town to another, patiently listening to the local burghers' gripes and then handing out plenty of cash. And she's very funny when exploring the roots of the campaign to rehabilitate Joan's reputation in a theological conflict within the University of Paris: "So much of life is fleeting, ephemeral: Seasons change, civilizations rise and fall; people are born, they live a little, they die. But faculty disagreements endure."

"The Maid and the Queen" does suffer a bit from the fact that the figure Goldstone presents as driving events, Yolande, is almost never at the scene when the action occurs. Her influence must be inferred by the presence or behavior of men who were allied to her in one way or another. Of course, this is the only way Yolande could have operated, but it makes Goldstone's central argument difficult to substantiate. "There is no more effective camouflage in history than to have been born a woman," she writes. Not all of that camouflage can be conclusively cleared away, but thanks to this book, a bit more of this remarkable life has been coaxed out into the open.