When corporations abandoned the 99%

Over the last 30 years, companies have shifted their loyalties from employees to shareholders 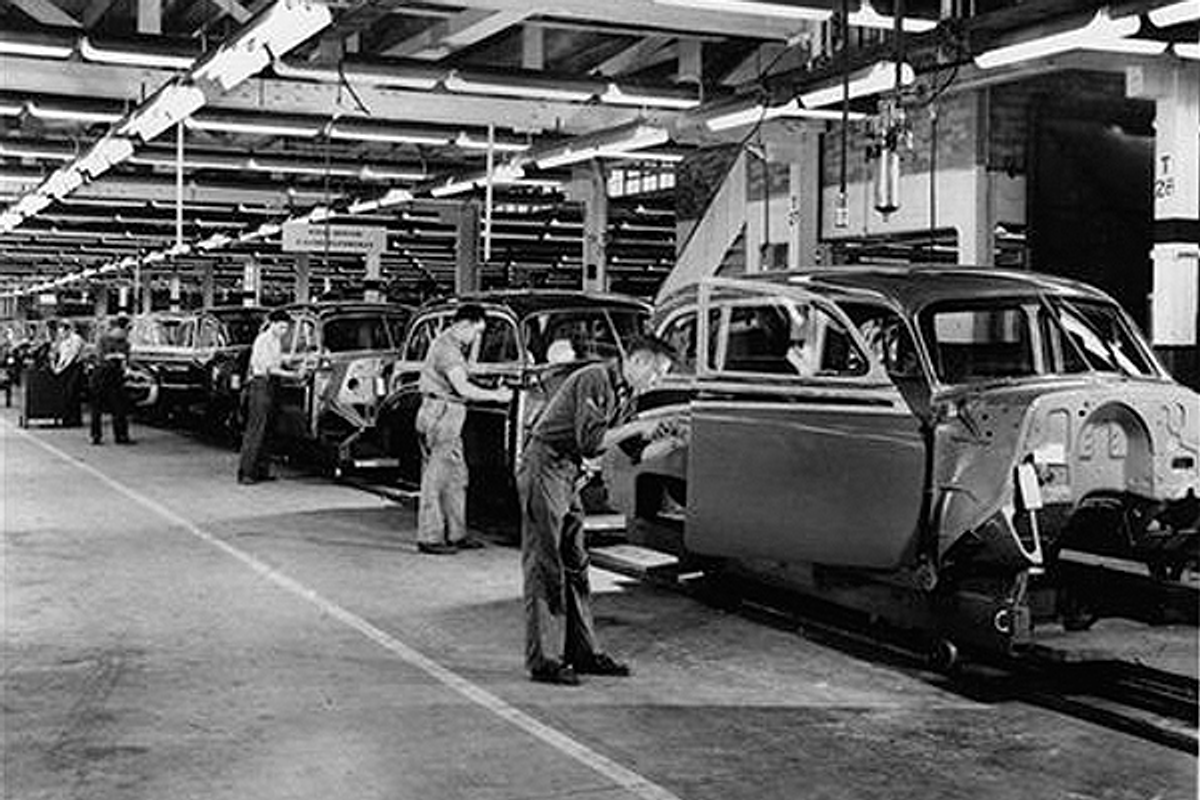 This originally appeared on AlterNet. It's the first essay in a five-part series analyzing the foundations, history and purpose of the corporation to answer this vital question: How can the public take control of the business corporation and make it work for the real economy?

In 2010, the top 500 U.S. corporations – the Fortune 500 – generated $10.7 trillion in sales, reaped a whopping $702 billion in profits, and employed 24.9 million people around the globe. Historically, when these corporations have invested in the productive capabilities of their American employees, we’ve had lots of well-paid and stable jobs.

That was the case a half century ago.

Unfortunately, it’s not the case today. For the past three decades, top executives have been rewarding themselves with mega-million dollar compensation packages while American workers have suffered an unrelenting disappearance of middle-class jobs. Since the 1990s, this hollowing out of the middle-class has even affected people with lots of education and work experience. As the Occupy Wall Street movement has recognized, concentration of income and wealth of the top “1 percent” leaves the rest of us high and dry.

What went wrong? A fundamental transformation in the investment strategies of major U.S. corporations is a big part of the story. A generation or two ago, corporate leaders considered the interests of their companies to be aligned with those of the broader society. In 1953, at his congressional confirmation hearing to be Secretary of Defense, General Motors CEO Charles E. Wilson was asked whether he would be able to make a decision that conflicted with the interests of his company. His famous reply: “For years I thought what was good for the country was good for General Motors and vice versa.”

Wilson had good reason to think so. In 1956, under the Federal-Aid Highway Act of 1956, the U.S. government committed to pay for 90 percent of the cost of building 41,000 miles of interstate highways. The Eisenhower administration argued that we needed them in case of a military attack (the same justification that would be used in the 1960s for government funding of what would become the Internet). Of course, the interstate highway system also gave businesses and households a fundamental physical infrastructure for civilian purposes– from zipping products around the country to family road trips in the station wagon.

And it was also good for GM. Sales shot up and employment soared. GM's managers, engineers and other male white-collar employees could look forward to careers with one company, along with defined-benefit pensions and health benefits in retirement. GM’s blue-collar employees, represented by the United Auto Workers (UAW), did well, too. In business downturns, such as those of 1958, 1961 and 1970, GM laid off its most junior blue-collar workers, but the UAW paid them supplemental unemployment benefits on top of their unemployment insurance. When business picked up, GM rehired these workers on a seniority basis.

Such opportunities and employment security were typical of most Fortune 500 firms in the 1950s, '60s and '70s. A career with one company was the norm, while mass layoffs simply for the sake of boosting profits were viewed as bad not only for the country, but for the company, too.

What a difference three decades makes! Now mass layoffs to boost profits are the norm, while the expectation of a career with one company is long gone. This transformation happened because the U.S. business corporation has become in a (rather ugly) word “financialized.” It means that executives began to base all their decisions on increasing corporate earnings for the sake of jacking up corporate stock prices. Other concerns -- economic, social and political -- took a backseat. From the 1980s, the talk in boardrooms and business schools changed. Instead of running corporations to create wealth for all, leaders should think only of “maximizing shareholder value.”

When the shareholder-value mantra becomes the main focus, executives concentrate on avoiding taxes for the sake of higher profits, and they don’t think twice about permanently axing workers. They increase distributions of corporate cash to shareholders in the forms of dividends and, even more prominently, stock buybacks. When a corporation becomes financialized, the top executives no longer concern themselves with investing in the productive capabilities of employees, the foundation for rising living standards for all. They become focused instead on generating financial profits that can justify higher stock prices – in large part because, through their stock-based compensation, high stock prices translate into megabucks for these corporate executives themselves. The ideology becomes: Corporations for the 0.1 percent -- and the 99 percent be damned.

The 99 percent needs to understand these fundamental changes in the ways in which top executives have decided to make use of resources if we want U.S. corporations to work for us rather than just for them.

The beginnings of financialization date back to the 1960s when conglomerate titans built empires by gobbling up scores and even hundreds of companies. Business schools justified this concentration of corporate power by teaching that a good manager could manage any type of business -- the bigger the better. But conglomeration often became simply a method of using accounting tricks to boost earnings in the short-run to encourage speculation in the company’s stock price. This focus on short-term financial manipulation often undermined the financial conditions for sustaining higher levels of earnings over the long term. But the interest of stock-market speculators was (as it always is) to capitalize on short-term changes in the market’s evaluation of corporate shares.

When these giant empires imploded in the 1970s and 1980s, people began to see the weakness of the model. By the early 1970s the downgraded debt of conglomerates, known as “fallen angels,” created the opportunity for a young bond trader, Michael Milken, to create a liquid market in high-yield “junk bonds.” By the mid-'80s, Milken (who eventually went to jail for securities fraud) was using his network of financial institutions to back corporate raiders in junk-bond financed leveraged buyouts with the purpose of extracting as much money as possible from a company once it was taken over through layoffs of workers and by breaking up the company to sell it off in pieces.

Wall Street changed the way it made its money. Investment banks turned their focus from supporting long-term corporate investment in productive assets to trading corporate securities in search of higher yields. The great casino was taking form. In 1971, NASDAQ was launched as a national electronic market for generating price quotes on highly speculative stocks. The Employee Retirement Income Security Act of 1974 encouraged corporate pension funds to get into the game since inflation had eroded household savings. In 1975, competition from NASDAQ led the much more conservative New York Stock Exchange, which dated back to 1792, to end fixed commissions on stock transactions. This move only further encouraged stock market speculation by making it less costly for speculators to buy and sell.

In 1980, Robert Hayes and William Abernathy, professors of technology management at Harvard Business School, wrote a widely read article that criticized executives for focusing on short-term profits rather than investments in innovation. But in 1983, two financial economists, Eugene Fama of the University of Chicago and Michael Jensen of the University of Rochester, co-authored two articles in the Journal of Law and Economics which extolled corporate honchos who focused on “maximizing shareholder value” -- by which they meant using corporate resources to boost stock prices, however short the time-frame. In 1985 Jensen landed a higher profile pulpit at Harvard Business School. Soon, shareholder-value ideology became the mantra of thousands of MBA students who were unleashed in the corporate world.

Proponents of the Fama/Jenson view argue that for superior economic performance, corporate resources should be allocated to maximize returns to shareholders because they are the only economic actors who make investments without a guaranteed return. They say that shareholders are the only ones who bear risk in the corporate economy, and so they should also get the rewards. But this argument could not be more false. In fact, lots of people bear risks of investing in the corporation without knowing if they will pay off for them. Governments in the U.S., funded by the body of taxpayers, are constantly making investments in physical infrastructures and human capabilities that provide benefits to businesses, but without a guaranteed return to taxpayers. An employer expects workers to give time and effort beyond that required by their current pay to make a better product and boost profits for the company in the future. Where’s the worker’s guaranteed return? In contrast, most public shareholders simply buy and sell shares of a corporation on the stock market, making no contribution whatsoever to investment in the company’s productive capabilities.

In the name of this misguided philosophy, major U.S. corporations now channel virtually all of their profits to shareholders, not only in the form of dividends, which reward them for holding shares, but even more importantly in the form of stock buybacks, which reward them for selling shares. The sole purpose of stock buybacks is to give a manipulative boost to a company’s stock price. The top executives then benefit when they exercise their typically bountiful stock options and cash in by selling the stock. For 2001-2010, 459 companies in the S&P 500 Index in January 2011 distributed $1.9 trillion in dividends, equivalent to 40 percent of their combined net income, and $2.6 trillion in buybacks, equal to another 54 percent of their net income. After all that, what was left over for investments in innovation, including upgrading the capabilities of their workforces? Not much.

Falling to the Challenge

Big changes in markets and technologies since the 1980s have given U.S. corporations serious competitive challenges. Confronted by Japanese and then Korean competition, companies closed plants, permanently displacing blue-collar workers from what had been middle-class jobs. Meanwhile, the open systems technologies that characterized the microelectronics revolution favored younger workers with the latest computer skills. In the name of shareholder value, by the 1990s U.S. corporations seized on these changes in competition and technology to put an end to the norm of a career with one company, ridding themselves of more expensive older employees in the process. In the 2000s, American corporations found that low-wage nations like China and India possessed millions of qualified college graduates who were able and willing to do high-end work in place of U.S. workers. Offshoring put the nail in the coffin of employment security in corporate America.

In response to these challenges, U.S. corporations could have used their profits to upgrade the capabilities of the U.S. labor force, laying the foundation for a new prosperity. Instead, the same misguided financialized responses have meant big losses for taxpayers and workers while the top 1 percent has gained. Instead of rising to the challenge, they’ve fallen into greed and short-sightedness that chips away at our chances for a prosperous economy.

Yet properly governed, corporations can be run for the 99 percent. In fact, that’s still the case in many successful economies. The truth is that it’s possible to take back the corporations for the 99 percent in the U.S. if we can really wrap our heads around the problem and the solutions. Here are three places to start:

1) Ban It. Ban large established companies from buying back their own stock, and reward them instead for investing in the retention and training of their employees.

2) Link It. Link executive pay to the productive performance of the company, with increases in executive pay being tied to increases for the corporate labor force as a whole.

3) Occupy It. Recognize that taxpayers and workers bear a significant proportion of the risk of corporate investment, and put their representatives on corporate boards where they can have input into the relation between risks and rewards.

William Lazonick is professor of economics and director of the UMass Center for Industrial Competitiveness. He is president of the Academic-Industry Research Network. His book, "Sustainable Prosperity in the New Economy? Business Organization and High-Tech Employment in the United States" (Upjohn Institute, 2009) won the 2010 Schumpeter Prize.