When gender gaps save presidents

New polling confirms they’re in revolt against the GOP, just as they were in 1996 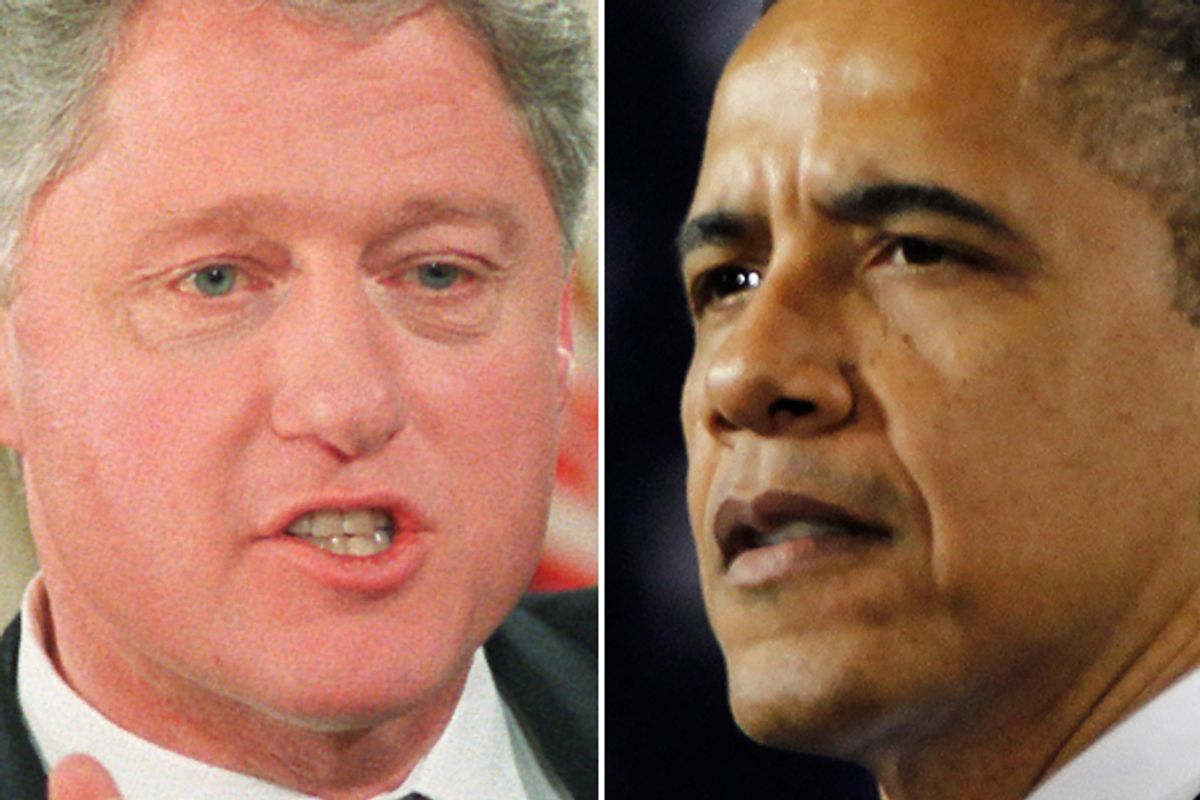 We’ve long since passed the point where it’s noteworthy when polling data shows a Democrat faring better with female voters than a Republican. The partisan gender gap has been evident in every national election since 1980, when Ronald Reagan essentially settled for a tie with Jimmy Carter among women, while crushing him among men by nearly 20 points.

It is news, though, when the male/female split suddenly widens and emerges as the potentially decisive factor in a presidential race. And while it’s still early, that may be where we are in the 2012 campaign.

A new USA Today/Gallup poll of 12 battleground states shows that Barack Obama actually trails Mitt Romney by 1 point among men. But among women, the president is ahead by 18 – giving him an overall lead of 9 points, 51 to 42 percent, in the battleground venues. This is a dramatic shift from mid-February, when the same poll put Romney ahead of Obama by 2 points. The difference is an exploding gender gap that can be isolated to a specific segment of the female voting universe:

The biggest change came among women under 50. In mid-February, just under half of those voters supported Obama. Now more than six in 10 do while Romney's support among them has dropped by 14 points, to 30%. The president leads him 2-1 in this group.

This is very likely a result of the prominence that contraception and women’s health issues have assumed in the public debate since February, when Republicans revolted against the Obama administration’s efforts to make birth control a mandatory component of health insurance coverage.

The way Republicans conducted themselves during that fight – Foster Friess’ aspirin comment, a GOP-convened House committee hearing made up entirely of male witnesses, Rush Limbaugh’s “slut” attack on Sandra Fluke and the reluctance of top Republicans to loudly condemn him for it – has made it easy for Democrats to claim that they are engaged in a “war on women.” Romney’s own statement last month that “we’re going to get rid of” Planned Parenthood if he’s president and the mandatory ultrasound bill that Virginia Gov. Bob McDonnell recently signed after a high-profile battle have had the same effect.

Nationally, Obama’s support from women has also been increasing. Back in January, a CNN/ORC poll showed him trailing Romney among registered voters by 1 point, 48 to 47 percent. That survey gave Obama an 8-point edge among women, 53 to 45 percent, with leaners included. The newest CNN/ORC numbers, released last week, put Obama 23 points up among women, 60 to 37 percent, helping to push him to an 11-point overall advantage over Romney.

Granted, Obama’s improved political position isn’t purely the result of gender politics. His standing with men has also jumped up; he was trailing with them in CNN’s January poll, but now is ahead. The positive economic news of the last few months has bolstered Obama’s image, just as the ugly nominating process that will apparently end with Romney as the GOP nominee has soured voters on him and his party. But the new battleground data suggests that women are at the heart of Obama’s gains – and that they could make the difference between victory and defeat for him in November.

This may be a case of history repeating itself. The last Democratic president to stand for reelection, Bill Clinton in 1996, owed his reelection to a massive and decisive gender gap. His campaign against Bob Dole is generally remembered as a sleepy, suspense-less affair, one that Clinton led wire-to-wire and ended up winning by a healthy 8-point margin. And yet, among men, Clinton actually lost to Dole by a point, 44 to 43 percent. It was women, who sided with Clinton by 16 points, who accounted for his lopsided victory. Without the 19thAmendment, Dole would have become the 43rdpresident of the United States.

The gender gap that defined the ’96 results marked a significant shift from the 1992 election, when Clinton won women by 8 points and men by 3. But, as with Obama, his presidency provoked relentless, culturally fueled conservative opposition that had particular resonance with white male voters, especially in the South and rural areas. The “angry white male” phenomenon was key to the GOP’s 1994 midterm landslide, and while some of them ended up returning to the Democratic fold in ’96, Dole ended up improving George H.W. Bush’s 1992 performance among white men by 10 points.

Meanwhile, though, Clinton increased his share of the women’s vote by 10 points. There was no obviously gender-based issue like contraception to account for this, but it seemed that women reacted with particular hostility to the GOP Congress that was elected in ’94 and to the face of that “Republican revolution,” House Speaker Newt Gingrich. In 1995 and ’96 Clinton portrayed himself as the chief defender of the social safety net, attacking Republican efforts to cut Medicare spending and shift federal programs back to the states.

The lopsided gender gap that Clinton opened up in ’96 has persisted by varying degrees in the three elections since – a 22-point difference between the parties in 2000, 14 in 2004, and 12 in 2008. We’ve always known that it would play a role again this year, and it may turn out to be a decisive one.