His campaign calls out Mitt Romney by name, and with that the general election campaign is underway 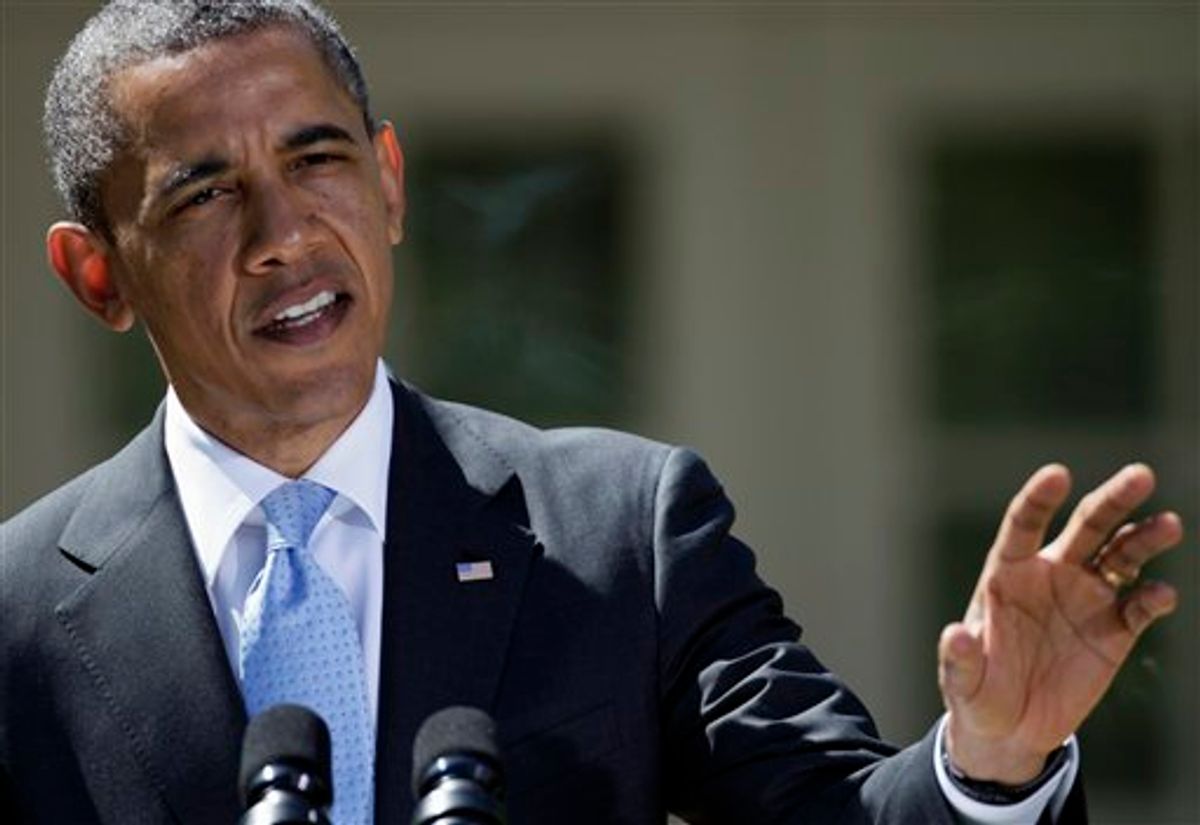 Mitt Romney’s effort to make Republicans acknowledge his inevitability and treat him as their presidential nominee is getting a boost from President Obama, who has in the past few days begun acting as if the general election campaign is already underway.

On Monday, the president’s campaign unveiled an ad that attacks Romney by name for the first time, accusing the former Massachusetts governor of doing Big Oil’s bidding. The message is being supplemented by a second ad introduced on Monday, this one from the pro-Obama super PAC Priorities USA, that conveys the same message.

Also on Monday, Obama responded publicly to Romney’s claims that Obama isn’t committed to “American exceptionalism.” This was a departure from Obama’s Super Tuesday press conference, when he passed on a chance to rebut a foreign policy attack from Romney and simply wished him “good luck.”

This came a few days after Obama filmed a video message for the Planned Parenthood Action Fund, positioning himself as a defender of vital women’s health programs and deriding “professional politicians” who “casually say they'll 'get rid of Planned Parenthood.” This, of course, was a direct reference to Romney, who promised a Republican audience last month, “Planned Parenthood – we’re going to get rid of that.” And today, Obama is set to deliver a speech criticizing the Paul Ryan-drafted budget plan that Republicans, including Romney, had rallied around.

All of this maneuvering is significant for two reasons. For one, it confirms that Obama and his team believe the suspenseful phase of the GOP nominating process is over. There’s no more hoping for a triumphant Santorum charge or a brokered convention in the White House. It also offers a valuable, if not comprehensive, window into what the Obama campaign sees as its general election imperatives, and how it plans to tackle them:

Non-coordination coordination: The new Obama ad is designed to respond to an attack spot from a pro-Romney group. So is the new ad from Priorities USA. Without the disclaimer at the end of each spot, it would be impossible to know which one was funded by Obama’s campaign and which was funded by an “independent” outfit. This is the absurd reality of super PAC politics. The Romney forces showed early in the primary season that they are comfortable exploiting it, and now Obama’s side has done the same.

Gas prices: Especially with the unemployment rate falling, Republicans are trying fiercely to pin the astronomical cost of fuel on Obama. The new Obama ads show how sensitive his team is to these attacks, and how intent they are on directing the public’s anger toward giant oil companies and their defenders. The ads are best viewed as an extension of Obama’s high-profile push last week to get Congress to end subsidies for the industry.

The Ryan albatross: It’s hardly shocking but still noteworthy that Obama is going to deliver a speech attacking Ryan’s budget, which would alter the basic nature of Medicare, slash tax rates disproportionately for the wealthy, and expose social safety net programs to potentially deep cuts. Just about every Republican in the House has signed off on it and Romney has no choice but to go along with it too. Running against the Ryan plan offers Obama a chance to recycle part of Bill Clinton’s successful 1996 playbook, when he presented himself as the last line of defense between a GOP Congress and the safety net.

Women: The GOP’s overheated posturing on contraception and reproductive issues gives Obama a chance to widen the traditional gender gap, especially with younger women. The newest polling data shows a significant drop in female support for Romney in the past six weeks, a trend Obama clearly wants to reinforce.

Rose Garden strategy: The GOP caricature holds that Obama is the second coming of Jimmy Carter – a weak, indecisive and apologetic commander in chief who is routinely pushed around on the world stage. That was the essence of the “American exceptionalism” attack from Romney that Obama responded to on Monday. What was most effective about Obama’s rebuttal, though, wasn’t its content; it was the setting: a Rose Garden appearance with two foreign leaders, Mexico's Felipe Calderón and Canada’s Stephen Harper, who vouched for Obama when the subject of Romney’s attack was raised:

“We had under your leadership, Barack, that successful intervention in Libya. Our trade relationship is the biggest in the world and growing.  And so I think it’s been a tremendous partnership,” he said.

Nothing quite illustrates the absurdity of the right’s attacks on Obama’s foreign policy like the spectacle of the prime minister of one of America’s closest allies (and the leader of its Conservative Party) pointing to one of his signature foreign policy achievements and praising his global leadership.