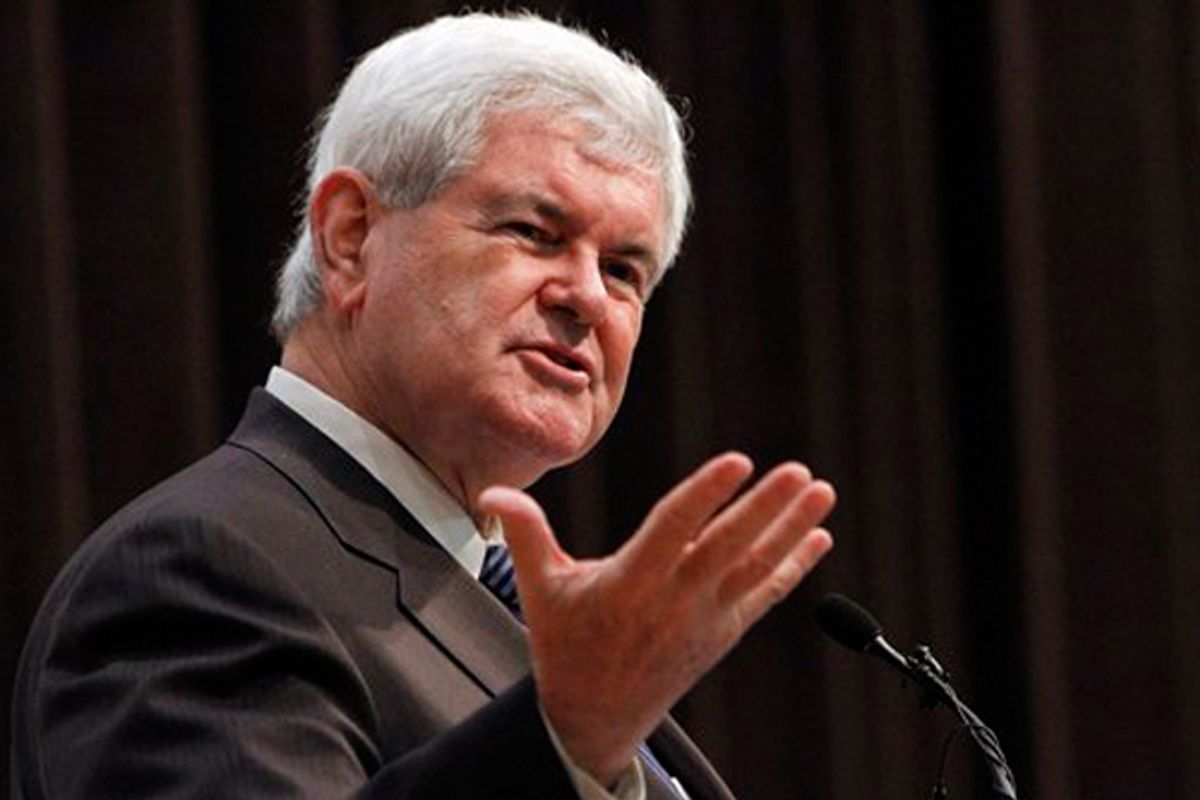 It's fitting that President Obama included in his big speech today a mention of Newt Gingrich, who represents a key common thread between the current presidential race and the last one to feature an incumbent Democratic president.

The purpose of the address, which was delivered to a crowd of Associated Press editors and reporters, was for Obama to present his objections to the Paul Ryan-authored budget blueprint that House Republicans supported almost unanimously last week and that Mitt Romney has called "an excellent piece of work, and very much needed." Obama derided the Ryan plan as "thinly veiled social Darwinism" that is "antithetical to our entire history as a land of opportunity and upward mobility for everyone who’s willing to work for it.” Basically, this was a rehearsal for Obama, who will make this same case over and over again for the next seven months in an effort to tie Romney to congressional Republican extremism.

The Gingrich shout-out came when Obama branded the Ryan budget "so far to the right that it makes the Contract With America look like the New Deal."

"That renowned liberal Newt Gingrich first called the original version of the budget 'radical,'" Obama reminded the crowd, "and said it would contribute to 'right-wing social engineering.' This is coming from Newt Gingrich!"

Gingrich made that statement during a "Meet the Press" appearance last May, back when Ryan's plan was limited to Medicare, which he envisioned turning into a voucher program. The withering response from conservative leaders that Gingrich's comment generated showed the degree to which adherence to Ryan's agenda has become a litmus test for the right, and explains (in part) why Romney has no choice but to embrace it. Back then, Gingrich tried, comically, to back away from his words, but it's hardly surprising Obama is recycling them now, and it won't be shocking if they work their way into Democratic talking points and television ads in the months ahead.

Obama is trying to replicate the strategy that Bill Clinton used to win a second term in 1996, when Clinton positioned himself as the last line of defense against a Republican Congress' efforts to gut the social safety net. The face of that Republican Congress was, of course, Gingrich, who became House speaker after the GOP's 1994 midterm landslide and led the party through a damaging series of confrontations with Clinton over spending on popular government programs, most notably Medicare. The Republicans' insistence on steep cuts allowed Clinton to paint them as dangerous extremists and badly wounded the GOP with some key demographic groups. In broad terms, the story that Clinton told at the 1996 Democratic convention in Chicago sounds similar to the one that Obama is telling now:

Now, last year -- last year when the Republican Congress sent me a budget that violated those values and principles, I vetoed it, and I would do it again tomorrow. I could never allow cuts that devastate education for our children, that pollute our environment, that end the guarantee of health care for those who are served under Medicaid, that end our duty or violate our duty to our parents through Medicare. I just couldn't do that. As long as I'm president, I'll never let it happen. And it doesn't matter -- it doesn't matter if they try again, as they did before, to use the blackmail threat of a shutdown of the federal government to force these things on the American people. We didn't let it happen before. We won't let it happen again.

There are many reasons Clinton was reelected in '96, including the public's widespread belief that the economy had improved substantially on his watch. But the profound unpopularity of Gingrich and the GOP Congress' agenda also gave Clinton a real boost. An exit poll on Election Day showed that 60 percent of voters had an unfavorable view of Gingrich, with only 32 percent expressing a positive view. Women voters abandoned the GOP in droves in '96, favoring Clinton by 17 points over Bob Dole -- even as men sided with Dole by a point. Analysts concluded that the perception that the GOP was recklessly endangering the social safety net (and that Clinton was committed to protecting it) was a major reason for the gender gap.

Sixteen years ago, Newt Gingrich helped a Democrat win a second presidential term for the first time since FDR. As Obama's speech today showed, he may end up providing another assist this year.