Conservatives and moderates declare SCOTUS-bashing to be "intimidation" 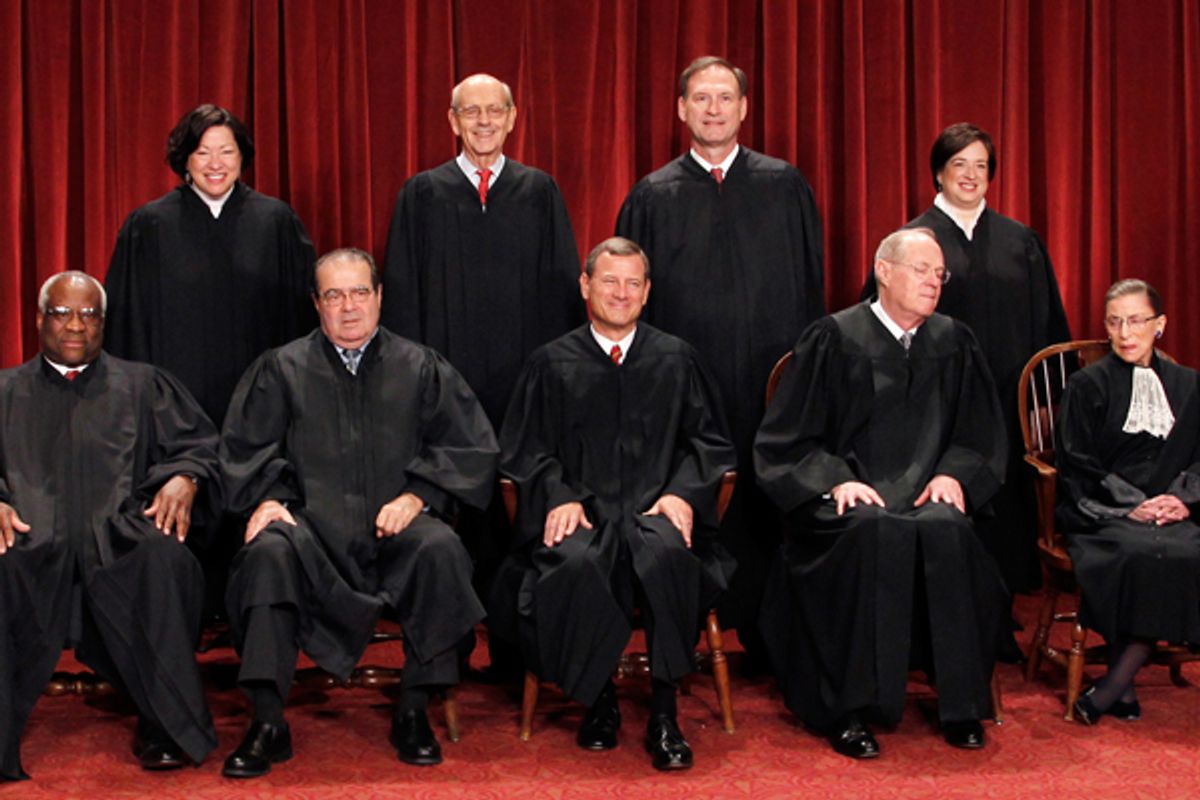 Ruth Marcus is unsettled. Maybe even queasy. There is probably some light nausea. What has her worried for the future of the nation, today? President Obama's shameful, horrific, vicious attacks on those nice people in the Supreme Court.

Obama said that the court overturning Congress' healthcare reform law would be a textbook example of "judicial activism" as "conservative commentators" define it: "that an unelected group of people would somehow overturn a duly constituted and passed law." And hey, that seems like an eminently defensible and not particularly unsettling point! Conservatives made "judicial activism" into a talking point and rallying cry and defined it vaguely enough to encompass judges striking down basically any law or statute.

Marcus, though, is stopped cold.

And yet, Obama’s assault on “an unelected group of people” stopped me cold. Because, as the former constitutional law professor certainly understands, it is the essence of our governmental system to vest in the court the ultimate power to decide the meaning of the constitution. Even if, as the president said, it means overturning “a duly constituted and passed law.”

Judicial review, as a former constitutional law professor certainly understands, is not in the Constitution -- an unelected activist judge made it up! -- and the founders themselves disagreed on the wisdom of the principle. (They tended, in fact, to decide whether or not they liked judicial review based on whether or not the judges ruled in a way that they approved of.) The history of the Supreme Court is replete with nakedly political and mostly conservative rulings until very recently, when we had a brief period of liberal-leaning rulings from a marginally more diverse group followed by a return to status quo conservatism.

As long as the Supreme Court has been making awful and indefensible rulings based on ideology or racism, presidents and politicians have been criticizing the court. Abraham Lincoln attacked the Supreme Court in his first inaugural address, in a passage that conservatives love to quote when they're attacking "activist judges."

At the same time the candid citizen must confess that if the policy of the government, upon vital questions, affecting the whole people, is to be irrevocably fixed by decisions of the Supreme Court, the instant they are made, in ordinary litigation between parties, in personal actions, the people will have ceased, to be their own rulers, having, to that extent, practically resigned their government, into the hands of that eminent tribunal.

I am stopped cold and unsettled!

Marcus, hilariously enough, supports the healthcare law and the mandate -- she is the world's most sensitive milquetoast moderate liberal newspaper columnist, after all -- which theoretically means she thinks it's constitutional, which would mean that declaring it unconstitutional should maybe upset her more than criticizing the court for being political, but on the other hand those judges seem very smart and our entire system of government could collapse if we aren't all super polite to one another and constantly deferential to authority.

I would lament a ruling striking down the individual mandate, but I would not denounce it as conservative justices run amok. Listening to the arguments and reading the transcript, the justices struck me as a group wrestling with a legitimate, even difficult, constitutional question. For the president to imply that the only explanation for a constitutional conclusion contrary to his own would be out-of-control conservative justices does the court a disservice.

Yes, I could tell they were very seriously wrestling with a difficult constitutional question when Scalia began joking around about broccoli mandates and the legendary "Cornhusker Kickback."

I'm not sure what more the Supreme Court could do before moderates like Ruth Marcus finally acknowledged that it's a partisan body with a right-wing majority. If Bush v. Gore didn't do it, maybe nothing could. But as a partisan body it is open to partisan attacks, and our fragile democracy will not descend into anarchy if people think as poorly of the Court as they currently do of Congress.

Of course, the Republican talking point is that the president is attempting to bully the Court into ruling the way he wants. (Because if they strike down the law, he'll ... yell at them during the State of the Union again? No one seriously predicts an arrest warrant for Chief Justice Roberts here.) Mitch McConnell: "This president’s attempt to intimidate the Supreme Court falls well beyond distasteful politics; it demonstrates a fundamental lack of respect for our system of checks and balances." Lamar Smith: "What is unprecedented is for the president of the United States trying to intimidate the Supreme Court." Mike Johanns: ""What President Obama is doing here isn't right. It is threatening, it is intimidating." (Did you notice how everyone used the word "intimidate"? That's because they got their language from a memo.)

The only time, besides Lincoln's suspension of habeas corpus, that any president has seriously threatened the independence of the Supreme Court was when Franklin Roosevelt tried to amend the law to give the president the power to appoint more justices. And Roosevelt, frankly, was right on the merits of his proposal. The court is completely unaccountable and ridiculously powerful, it always has been, and pointing that out does not a constitutional crisis provoke.