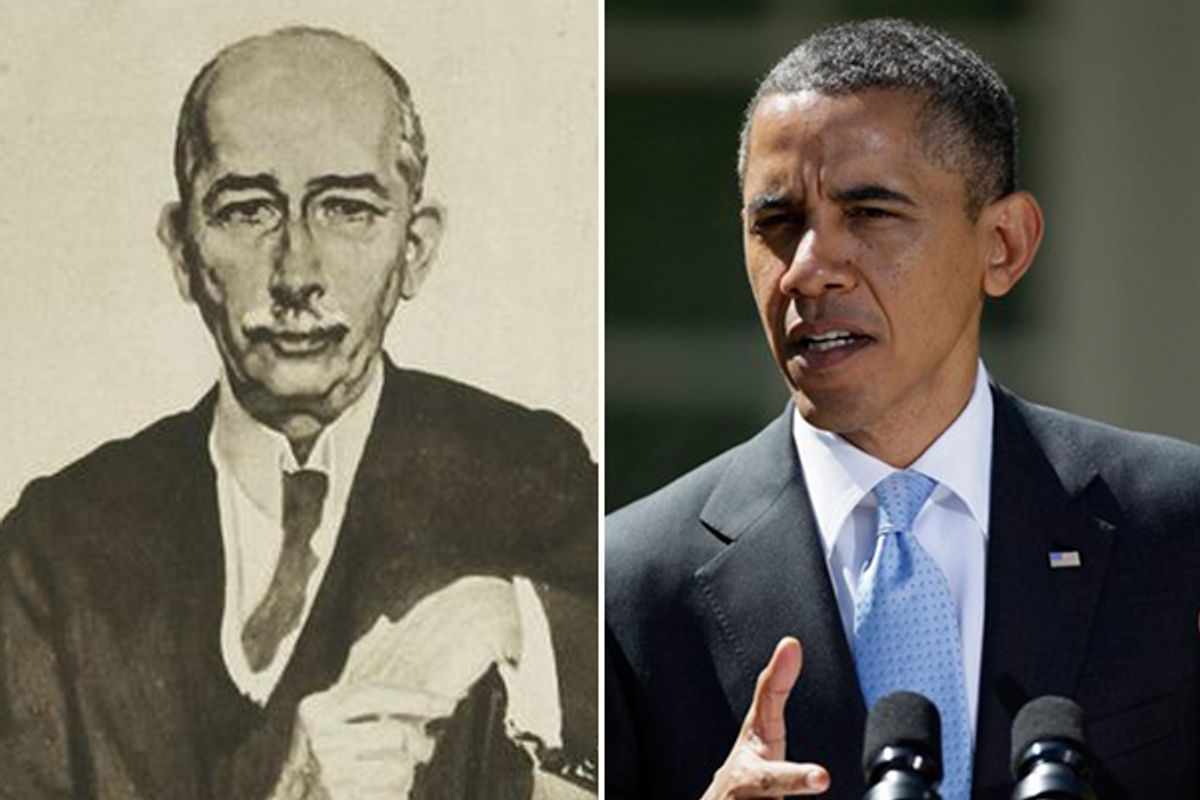 “For a long time I have known that this hour would come, and that there would be those of you who would stand affrighted at the momentous change from constitutional government to despotism, no matter how pure and exalted you might believe my intentions to be.

“But in the long watches of the night, in the solitude of my tent, I conceived a plan of government which, by the grace of God, I hope to be able to give to the American people. ... (H)ateful as is the thought of assuming supreme power, I can see no other way clearly." -- from "Philip Dru: Administrator"

"Philip Dru, Administrator: A Story of Tomorrow, 1920-1935" is a novel about a successful rebellion against a hopelessly corrupt U.S. government. Its leader then becomes a benevolent dictator, and restores the rule of law to the Republic. Though he didn’t put his name on the book, author Colonel Edward Mandell House was a Texas political insider who worked assiduously to make Woodrow Wilson president. After the 1912 election, he became Wilson’s closest advisor.

So is it a bad turn-of-the-century novel -- or a Nostradamus-like prediction of America under President Obama?

“Philip Dru,” published in 1912, is no less dated and didactic than most works of its kind; imagine what future generations of readers will make of Glenn Beck’s "The Overton Window." But Beck and those like him, inside the twisted thought system of right-wing conspiracy blogs, seriously regard House's book as “a detailed plan for the future government of the United States.” The extreme right reads "Philip Dru" as the smoking gun that proves the existence of a vast left-wing conspiracy, as a terrifying presage of the Obama administration. Beck has asked listeners to read the book as "homework." To them, this is not a novel of the Wilsonian era, but a terrifying tale of today.

Republicans might have resented the fanatical hatred that George W. Bush inspired in so many Democrats — Bush Derangement Syndrome, as Charles Krauthammer called it — but there was no mystery about its causes. Bush strutted and smirked; he launched wars with cowboy talk; he angered his adversaries and he knew it. Barack Obama, in contrast, promised a post-partisan presidency that would be all about splitting differences and searching out common ground. Most Democrats — including Obama himself — were caught off guard by the spirit of vindictiveness (Hitler mustaches; birth certificates; “You lie!”; death panel accusations, etc.) that have possessed the right since his inauguration.

But even if you dip an occasional toe into the paranoid waters of Fox News, you likely see only a small part of the bizarre anti-Obama fear that grips the far right -- fear that turns obscure, long-forgotten books into texts blessed with the power of prediction. (Of course, even casual political watchers know how much energy the GOP draws from its farthest extremes.) In their bizarre fantasies, Obama is a character in a battle between the forces of absolute good and absolute evil. Their eternal enemy is a cabal of billionaires that, with the assistance of academic elites, commands the armies of the poor — the mobs of minorities and illegal immigrants at home and Islamic fundamentalists abroad who supposedly seek to destroy America. As a black Democrat with a Harvard pedigree and a foreign, Islamic name, Obama is more than sinister — he is Satanic.

If this story line seems like something out of a fever dream, it has gripped extremist conservatives for generations with only a few minor topical variations. In the 1920s and 1930s, the enemy was the Rothschild-Rockefeller nexus of bankers and Bolshevik Jews. In the 1950s and 1960s it was race-war-fomenting internationalist Insiders; in the 1970s, '80s and '90s, United Nations blue helmets, black helicopters and the New World Order.

Colonel House, the founder of the Council on Foreign Relations, looms larger in the conservative imagination than he does in the popular memory. Not just an arch internationalist, he is also the personification of the cult of expertise. As George Will summarized the “awful but indicative” plotline of House’s novel: “With the nation in crisis, Dru seizes power, declares himself ‘Administrator of the Republic,’ and replaces Congress with a commission of five experts who decree reforms that selfish interests had prevented.” Progressives, Will explained, “are forever longing to replace the governance of people by the administration of things. Because they are entirely public-spirited, progressives volunteer to be the administrators, and to be as disinterested as the dickens.”

A chorus of extreme right-wing pundits echo Mullins’ analysis today. “There is God and there is Satan. There is good and there is bad ... Well, the opposite of 'Atlas Shrugged' is the book 'Philip Dru,'” says Milton Reid, who offers his readers a free download so they can see for themselves the “blueprint the lefties (and progressive Republicans) are trying to follow now!”

Glenn Beck has urged his listeners to seek out House’s book online and read it to learn the ugly truth about progressivism. Woodrow Wilson -- “the worst president this country has ever had; he hated America” -- read it three or four times, Beck said.

“The similarity between Philip Dru and Barack Obama is uncanny,” Henry Lamb informed readers of WorldNetDaily.

Obama set out immediately to create an ‘administrator’ type of government by naming more than 30 czars that bypassed congressional approval and oversight, each with administrative power and responsible only to the administrator-in-chief … Philip Dru Obama is making unbelievable progress toward converting the United States to an ‘administrator’-type government under the control of his personally chosen sub-administrators. His policies ignore the Constitution and the expressed will of the American people. The nation Obama is building is looking much more like the socialist nations in Europe than the free-market America our founders created.

The view of Obama as a dictator goes much farther than the principled critiques of his Justice Department’s overreaches in the realm of civil liberties. Even as the fate of the Affordable Care Act, Obama’s largest legislative achievement (a chimerical public/private compromise, painstakingly cobbled together, Rube Goldberg-like, from ideas proposed by the right-wing Heritage Foundation) has been punted up to the Supreme Court, the far right still sees Obama as a classic strongman. If the left views Obama as virtually a hostage of the right, the right sees him as a tyrant who rules with an iron hand.

The character Philip Dru was a West Point officer who resigned his commission due to ill health to become a social worker and community organizer in New York’s Lower East Side for five years. Dru’s ‘purpose was not so much to give individual help as to formulate some general plan and to work upon those lines.’ Dru comes out of this experience as a military leader of the rebellion against a corrupt national government to become ‘administrator to the Republic,’ that is, dictator of the United States, and then later of one quarter of the world, and finally, in cooperation with the British, the rest of the world.  He then, once the world government is set up, retires to study the Russian language.

Take the trouble to read "Philip Dru: Administrator " and you will quickly discern that House’s elitism, his noblesse oblige and his militarism — he foresaw a vast extension of the Monroe Doctrine that would result in “the amalgamation of Mexico and the Central American Republics into one government, even though separate states were maintained” — had much more in common with Teddy Roosevelt’s Big Stick Progressivism than Marxist-Leninism. But as anyone who reads John Birch Society publications or listens to Beck knows, even Teddy Roosevelt is regarded as something of a crypto-Communist in far-right circles these days.

Perhaps not surprisingly, the conspiracist literature also features considerable speculation about whether House was Jewish. In "Zionism: The Hidden Tyranny," a 1950s vintage pamphlet, Benjamin H. Freedman, the millionaire owner of the Woodbury Soap Co. who, before he converted to Catholicism and took up the cause of anti-Communism and anti-Zionism had been a self-styled “highly-placed insider” in the Jewish establishment, notes that House “did not claim or disclaim his Talmudist ancestry to this author.” In "The Controversy of Zion," the English anti-Semite Douglas Reed expatiates on the mystery of House’s origins, pointedly quoting his biographer Arthur D. Howden, who wrote that House’s “middle name, Mandell, was that of ‘a Jewish merchant in Houston, who was one of his father’s most intimate friends; the fact that the elder House conferred a Jewish name upon his son indicates the family’s attitude towards the race’).” John Coleman has contended that House, who was born in Houston in 1858, was really Mandell Huis, a Dutch Jew.

Even Henry Ford got into the game. In his Nov. 20, 1920, installment of "The International Jew," Ford observed that the financier and Washington wise man Bernard M. Baruch attended the College of the City of New York. “This college,” he averred, “is one of the favorite educational institutions with the Jews, its president being Dr. S. E. Mezes, a brother-in-law of Colonel E. M. House, the colonel whose influence … at the White House has for a long time been a favorite subject of wondering speculation on the part of the American people.”

The Jews could do greater things in the United States than even Baruch has done, if the opportunity offered ... but what would it signify? The ideal of a dictator of the United States has never been absent from the group in which Baruch is found — witness the work, "Philip Dru, Administrator," commonly attributed to Colonel E. M. House, and never denied by him.

What would Henry Ford have said had he lived to see not a Jew but a black man — with an Islamic name yet — taking the reins of power? Most of the same things that Obama’s adversaries are saying, in all likelihood.