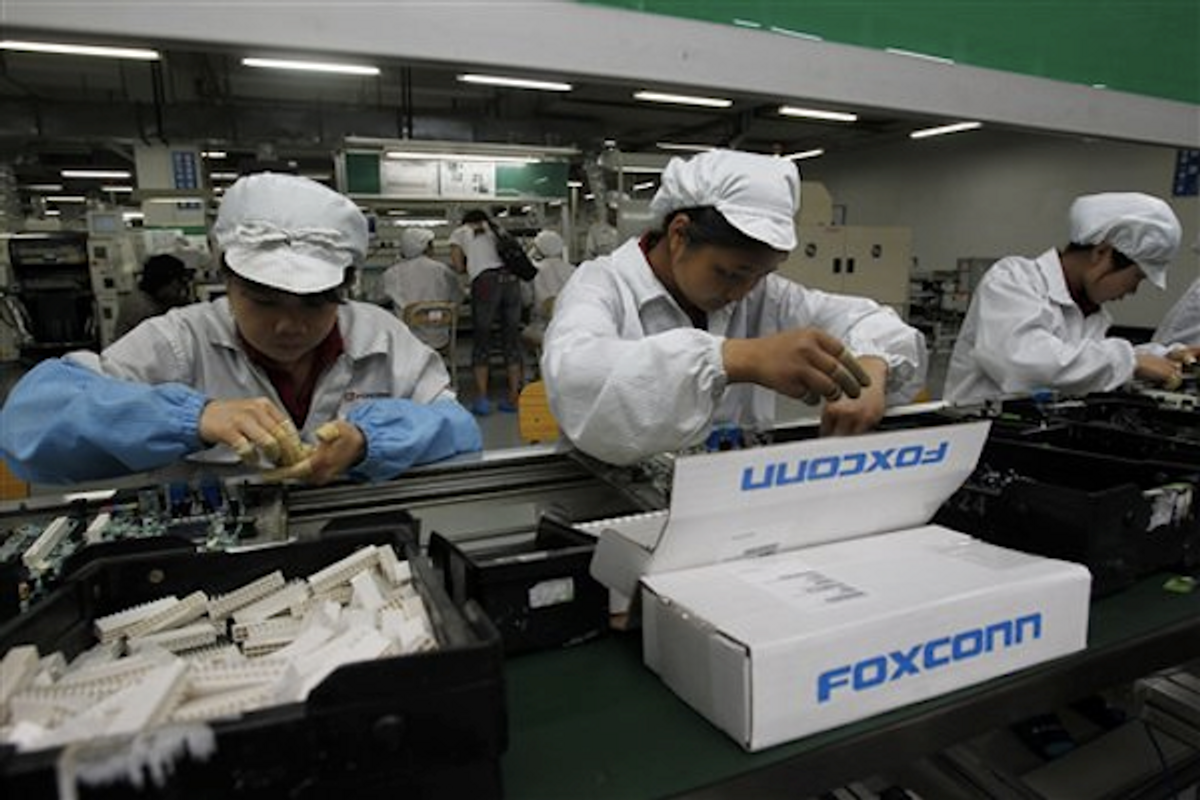 TAIPEI, Taiwan — Guilt-ridden iPad users were ready to rejoice last weekend, after Foxconn announced that it would bump up pay, reduce overtime and improve living conditions and safety protocols for its legions of Chinese workers producing Apple products in the coastal boomtown of Shenzhen.

For years, the Taiwanese electronics giant has been dodging accusations of bad labor practices, charges that have tarnished the reputation of the world's hottest gadget retailer.

But electronics industry insiders caution against celebrating a labor victory too soon.

It will only be a matter of time, they say, before contract suppliers simply shift operations to cheaper Asian destinations and replace hundreds of thousands of Chinese jobs with robots.

“The increased labor demands will continue to push them into places like Vietnam or further into automation," he said, adding that he's been seeing "a lot more automation taking place,” even before Foxconn's announcement.

The pressure on Apple and its key manufacturer has been particularly intense since May 2010, when labor activists claimed that at least 14 Chinese workers committed suicide at the strictly regimented plants.

Since the suicide revelations, there have been reports about illegal overtime hours, cramped dorm rooms, employee blacklists, shadowy security personnel and a weird corporate culture built around Foxconn founder Terry Guo, who owns a $30 million castle in the Czech Republic and counts 13th century Mongolian warlord Genghis Khan as his personal hero.

But insiders say that this latest round of pressure applied to Foxconn — which makes about 50 percent of global electronics and has a market capitalization equal to its 10 closest competitors — came about through its close ties to Apple, which first overtook Exxon as the world’s most valuable company in August last year.

The Taipei-based company — which also counts Sony, Nokia, Dell, Nintendo and Motorola among its clients — had already increased workers’ wages by 16 to 25 percent in February.

“The main reason Foxconn is under such a bright microscope is because it’s a foreign company and it works with Apple. Actually, for what it does, it has some of the highest wages in the industry and treats its workers much better than local Chinese outfits,” said L’Epagnol.

But critics claim that Foxconn, a subsidiary of Taiwan's Hon Hai electronics company, is also under scrutiny because it dominates the global electronics supply chain and is a litmus test for industry-wide labor practices.

Where Foxconn goes, its competitors are likely to follow. So, the question is, where will Foxconn go?

“Robots and automation are definitely increasing trends. So are Foxconn’s moves into central China where labor costs are lower [than coastal China],” said Ying-dah Wong, a Taiwanese labor activist.

"They want the cheapest possible labor while escaping the most basic labor laws. That’s why you will see them connive with dictators and autocratic governments in places like Vietnam and Cambodia, so they can ensure their interests are always protected,” Wong added.

Foxconn has factories operating in Hungary, Mexico, India, Malaysia, Brazil and Vietnam. It's the largest exporter in the Czech Republic. But it may be the communist state to the south of China that becomes the biggest recipient of the company’s “largess.”

The minimum wage in Vietnam is about $85 per month, a figure that’s substantially lower than Shenzhen’s $207. Guo, Foxconn's founder, was also reportedly so impressed after meeting Vietnam’s president and other top brass that he offered to increase his $80 million investment in hardscrabble Bac Ninh province to $5 billion, sprinkled throughout the country.

“Communist and other autocratic countries just want jobs. It is as much a security and social order issue as it is an economic issue,” says Ying.

As for the iRobots, global industrial robot sales surged by 18 percent in 2011. Foxconn alone said it will produce 300,000 robots by next year, and 1 million by 2014. If all goes according to plan, an estimated 500,000 of Foxconn’s 1 million Chinese jobs will soon be obsolete.

In an email to GlobalPost, a Foxconn representative confirmed the move toward technology, but downplayed any potential negative impact. “Automation is playing an increasingly important role in our operations as our manufacturing processes and the products we produce become more sophisticated. This development is allowing many of our employees to move up the value chain,” the emailed statement read.

However, the International Federation of Robotics predicts that China will be the top robot market by 2014, and labor activists fear that if major companies like Foxconn set a precedent, millions of jobs in developing countries will be lost.

“Foxconn sets the pattern for others in the industry. Rising wages are a good thing for Chinese workers, the Chinese economy and the global economy, but only as long as productivity improves in tandem with wages,” said Chang-hee Lee of the U.N.-backed International Labor Organization.

But while much is made of the responsibility contract suppliers have in the developing world’s labor food chain, others aren’t so convinced.

“People don’t understand that companies like Apple drive these practices. Our margins are super, super low. They come in and say: ‘We want this produced. We want this many units. We want them delivered by this time. And this is what we are going to give you. If you can’t do it, someone else will,’" said a price analyst at a Foxconn rival who spoke on condition of anonymity.

"The days of bidding or putting quotes up with these big American companies are long gone,” he said.