The problem with being generic 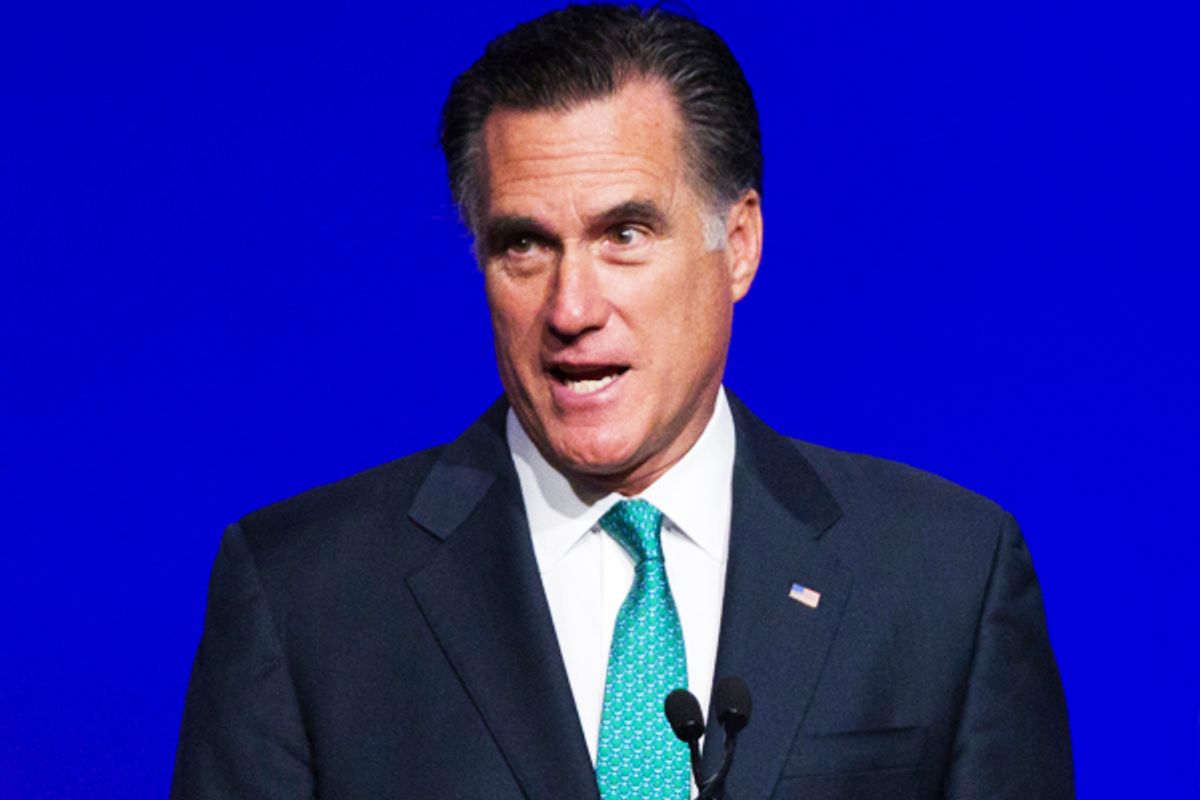 Mitt Romney just delivered what many are interpreting as his opening speech of the general election campaign, at a newspaper industry convention in Washington.

Actually, Romney has delivered many speeches this year that he hoped would shift everyone’s attention to the fall, generally after winning major Republican primaries, like in New Hampshire and Florida. But he’s had a nasty habit of following up breakthrough victories like those with humbling losses to Rick Santorum and Newt Gingrich, thereby returning the political world’s focus to the GOP nominating contest.

But Romney’s D.C. speech today did seem different. This is partly because the mathematical inevitability of his nomination is now widely understood, especially after the giant delegate bounty he reaped with his three-contest sweep Tuesday night. But it’s mainly because President Obama, who used his own remarks to the same convention to preview the major argument he’ll be making against the GOP this fall, is now treating Romney like his opponent. The dueling appearances really did have the feel of the first major general election event.

It’s a general election that Romney enters as the underdog, and his speech helped to illustrate why.

Contest-wise, there really wasn’t much surprising or new about it. Romney ran through his (and every Republican’s) familiar list of supposed Obama administration lowlights – massive debt, the stimulus, a “government takeover” of healthcare, and a lack of understanding of and hostility to business and free enterprise. Oh, and Solyndra too, of course. And he made familiar, non-specific pledges to cut taxes, grow the economy and “save and strengthen” Medicare and Social Security.

The most interesting moment probably came when Romney tried to foist his own Etch A Sketch problem on Obama, using the president’s recent hot mic moment with Dmitry Medvedev to argue that it’s Obama who “does not want to share his real plans.” Mostly, though, this was a generic campaign speech for a Republican candidate running against an incumbent Democrat, delivered very competently, if not dazzlingly.

Which is fitting, because Romney really isn’t capable of being much more than a generic candidate. As everyone is aware by now, he doesn’t have an outside public personality, can be stiff and awkward in casual settings, and lacks any natural skill for communicating emotion. Nor is there much in his life story – the son of wealth and privilege who made a fortune in private equity – to inspire the average voter.

At the same time, he can be good at reciting talking points in speeches, debates and interviews and has assembled a disciplined, professional and well-funded campaign organization. His penchant for “wealth gaffes” could still make Romney something worse than a generic candidate, but it’s pretty clear by now that he’s never going to be much more than a generic candidate.

Being generic isn’t necessarily a bad thing for a candidate. But it does make that candidate unusually dependent on factors that he or she can’t control. Romney is now the underdog against Obama because two huge factors – the state of the economy and the image of his party – are now working against him.

The unemployment rate is down nearly a point from the middle of last year, which has given rise to public optimism that the economy is finally returning to life and that the worst of the Great Recession is behind us. As TPM showed today, this feeling is particularly pronounced among independent voters, whose assessment of the country’s economic direction has been steadily improving since last August. Not coincidentally, it was last August when Obama’s job approval numbers also hit rock bottom, and they’ve also improved since then.

Meanwhile, the Republican Party’s image continues to take a beating. After last August’s debt ceiling showdown, the number of Americans expressing a favorable view of the GOP fell to 33 percent in a CNN poll – the lowest score since the height of Bill Clinton’s impeachment in 1998. In CNN’s latest poll, released last week, the number is basically the same, 35 percent. Democrats, on the other hand, clock in at 48 percent favorable and 45 percent unfavorable. There is also evidence that women – in particular, college-educated women – are now turning strongly against the GOP in the wake of the contraception fight the party recently picked.

When a poll showing an exploding gender gap in the presidential race was released on Sunday, Romney’s pollster, Neil Newhouse, argued that “it goes beyond Mitt Romney or Newt Gingrich or Rick Santorum to a partisan gender gap. It's not Romney-specific. I would argue that it's broader than that."

Newhouse is surely right, but that’s just the point: If the Republican Party has a serious image problem – with women or with any other group of voters – a generic Republican candidate is not going to be well equipped to separate him- or herself from it.

A year or two ago, when economic pessimism was rampant and the GOP’s favorable score was 10 points higher, being generic would have been a winning approach for Romney. And it still might be, if the factors that are beyond his control start working to his advantage again. But for now, at least, it’s just not enough.