U.S.-style protests and Breitbart-like tactics have given the British anti-abortion movement new life 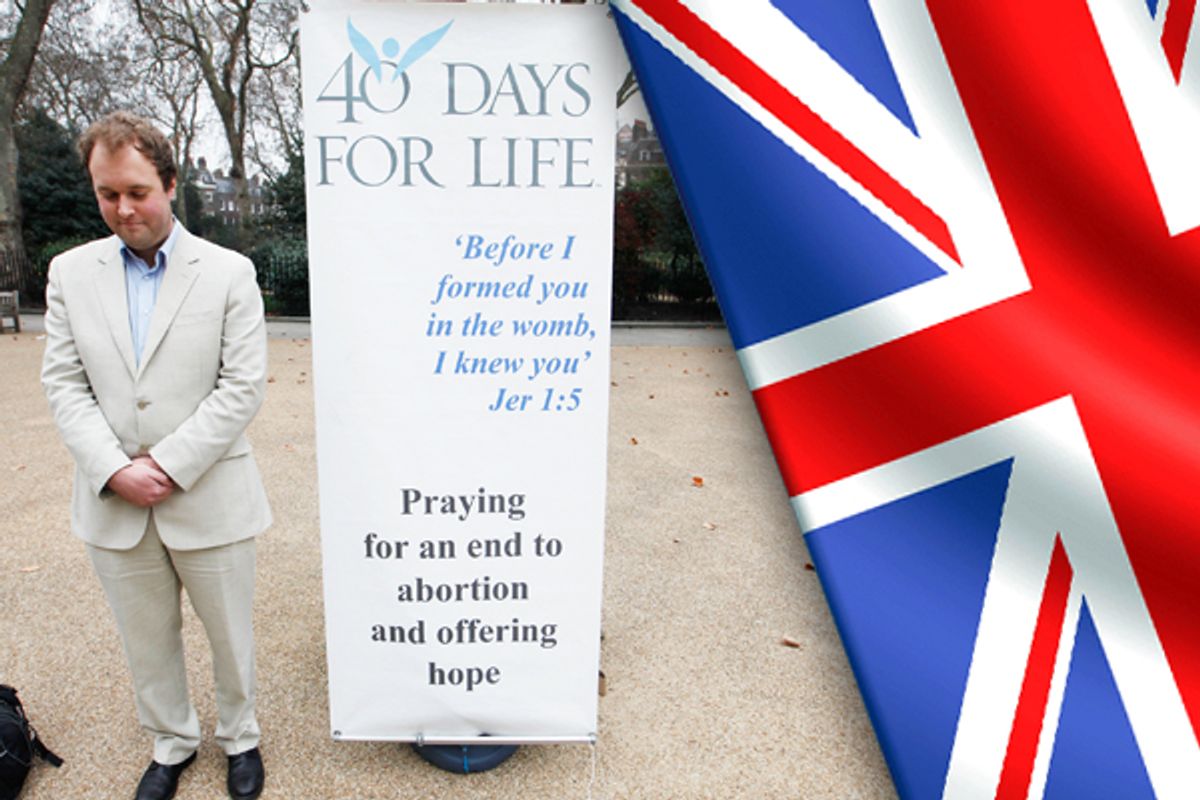 An activist stands outside a branch of the British Pregnancy Advisory Service, a clinic which offers abortions, in central London. (Reuters/Andrew Winning)
--

Anti-abortion protests might seem as American as apple pie, but don’t be fooled. Activists from Texas have just laid siege to Britain, the country the Daily Mail has called the “the abortion capital of Europe.”  And their American-style demonstrations outside the headquarters of the British Pregnancy Advisory Service recently led the group to warn that the new anti-abortion climate could spook future doctors from entering women’s health.

At the root of these protests is the devoutly Christian “40 Days for Life,” a Virginia-based organization that has been working hard to export American-style anti-abortion protests to other countries. The group had its start in 1998 when Planned Parenthood announced plans to build a clinic in College Station, the home of Texas A&M. According to the official history, a pharmaceutical salesman and religious Catholic named David Bereit rallied 60 churches of different denominations and thousands of people and “dramatically reduced abortions in the region.”

Bereit then organized the first 40 Days for Life campaign in 2004 on the A&M campus, where he recruited his chief lieutenant, a media savvy young man called Shawn Carney. Now global, 40 Days has been organizing English Catholics, Protestants, Evangelicals, and others since September 2010. Their most recent effort came during the 40 days of Lent, when they ran continuing “prayer vigils” outside the BPAS headquarters on Bedford Square in the historic Bloomsbury section of Central London. The protesters also staged similar vigils at the corporate Calthorpe Abortion Clinic in Birmingham, the Marie Stopes Clinic in Manchester, and the Wistons Clinic in Brighton, where they worked with Abort67, an offshoot of America’s highly controversial and virulently graphic Center for Bioethical Reform.

The English protests were all part of a campaign throughout the United States and around the world that 40 Days call “the largest and longest coordinated pro-life mobilization in history.” The list of 251 participating cities over the past  four-and-a-half years stretches from Sydney and Buenos Aires to Warsaw, Madrid, and Dublin. Both Bereit and Carney visited London to help inspire this year’s protests and guide them in the direction of made-in-America demonstrations. The vigils involve praying, fasting, bearing witness, and reaching out to the community to end abortion. England’s Catholic hierarchy supported the protesters, with Bishop Alan Hopes attending an evening prayer vigil last Friday.

Bereit told the Catholic World Report the protests are meant to be completely “non-confrontational.” Many of the pregnant women, their supporters, and the staff at the clinics saw a different reality. “We are very supportive of people's right to protest,” Clare Murphy of BPAS told the Guardian’s Sarah Ditum. “But what we saw in Bedford Square was beyond the pale… . They hang around by the door and encircle women.” The protesters, said BPAS CEO Ann Furedi, “should really think carefully about whether what they are doing is really Christian.”

The protests aren’t the only American-style anti-abortion action that Britain has recently seen. In February, the conservative Daily Telegraph took a page from Andrew Breitbart and James O’Keefe and sent pregnant women with undercover journalists and hidden video cameras into four abortion clinics around England. They then published videos of doctors agreeing to abortions where the mother said she wanted to terminate the pregnancy because she did not want to have a girl.

Tory Health Secretary Andrew Lansley responded to the videos by ordering unannounced inspections of some 250 abortion-providers. These were to be conducted by the government’s much criticized Care Quality Commission, whose director had just been forced to resign after a series of major cock-ups. Well before the commission finished its investigation, the Telegraph reported that more than 50 of the clinics were “not in compliance.” Secretary Lansley, already under fire for his controversial efforts to privatize and otherwise reform the National Health Service, said he was “shocked” and “appalled,” and called in the police and medical authorities, who banned some of the doctors in the videos from performing abortions.

Together with the 40-Day protests, the government inspections left the abortion-providers feeling “under siege,” as BPAS said in its statement. They feared that the newly heated atmosphere and government “witch-hunts” could deter a new generation of doctors from providing abortion services, especially for the more difficult later term cases. “Abortion is a vital yet stigmatized area of women's healthcare which few doctors train in,” a spokesman for BPAS told the Guardian. “The current politicization of abortion provision is likely to make it even harder to recruit a future generation of abortion doctors who are prepared to provide the care that a third of women will need in the course of their lifetimes.”