She's one of the best rappers in the world -- so why does she need to pretend to be male? 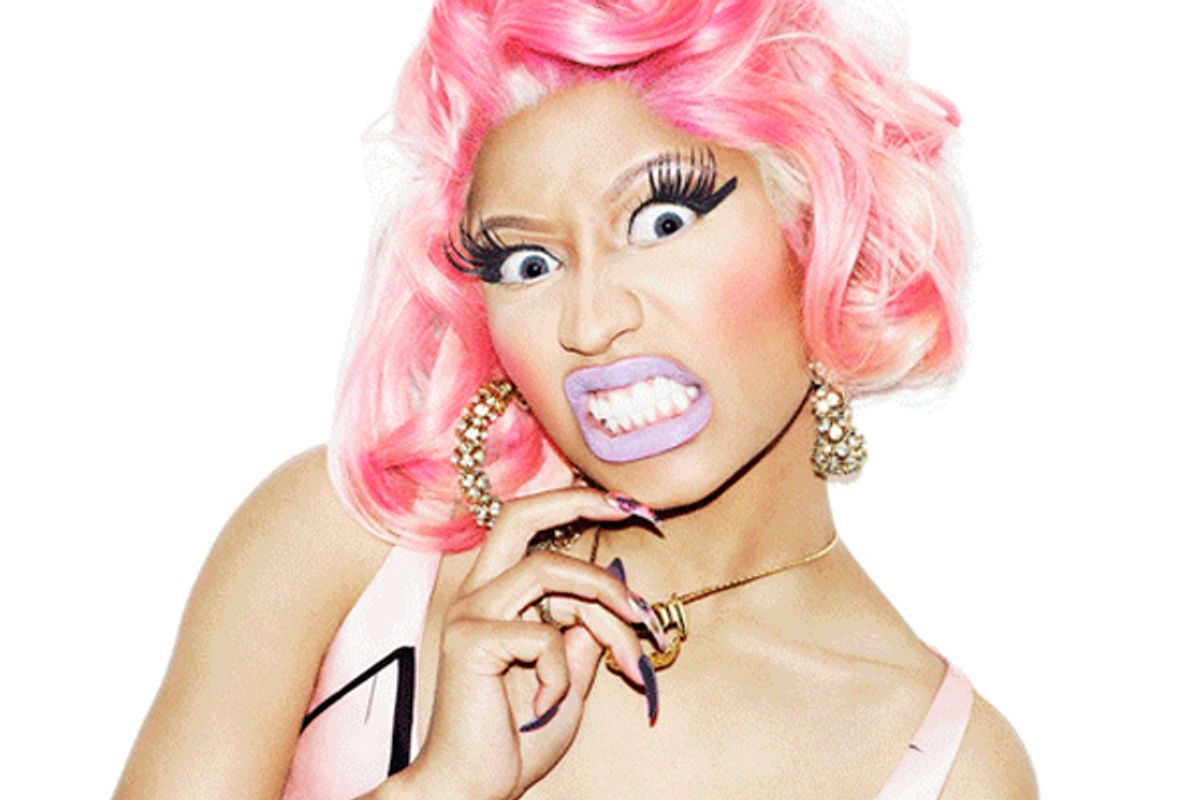 The new Nicki Minaj album, "Pink Friday: Roman Reloaded," is out and set to take the top spot on Billboard’s albums next week, despite the fact she’s more divisive than ever. Literally: The first half is hardcore rap and the second is club-derived pop. It’s not actually much disputed that she’s one of the greatest rappers in the world right now -- and she might well be the very best.

But the people claiming to be the truest hip-hop fans only seem to prefer half of the artist, namely when she claims to be playing an invented male personality named Roman. This is often dissonant with her feminine aesthetics and Lady Gaga-influenced wardrobe, part of why she’s celebrated as such an original. So why does a rapper as self-evidently talented as Nicki have to recast herself as a man? Well, to get respect.

Minaj has spent much of her career playing up an image of traditional (almost cartoonishly so) girliness. One of her earliest mixtapes was called "Barbie World" and “Harajuku Barbie” is one of her many nicknames. On the "Pink Friday" CD cover she intentionally resembles a lifeless, leg-lengthened plastic doll. Her near-literal hourglass figure is widely assumed to be unnatural. In videos and album art she’s bedecked in pastels, shades of rainbow and, yes, pink.

At the start of Nicki Minaj’s 2010 debut album, she announced “I am not Jasmine/ I am Aladdin.” Weird choice of hero — his success was totally dependent on that lamp — but that’s not the point. She’s the title character, not your sidekick, love interest or video ho. It wasn’t the boldest boast in rap that year; that title goes to the next track, in which she imagines having a penis and says, "I would pull it out and piss on em,” which isn’t even the most scatological line in the song.

Flash to 2012, where "Pink Friday: Roman Reloaded" immediately dispenses with the hypothetical: “If you wasn’t so ugly," she raps, she'd put that same appendage in your face. She stops the beat to riff on this obscenity for a little, in an ironic, Mariah-esque melisma. In her mocking tone over a fire-engine siren beat, the effect is so disorienting that it takes several plays to notice the song’s cryptically filthy-sounding title, “Come on a Cone,” is only a reference to how cold her ice is. It’s bookended by a similarly phallic dare and a reintroduction to her, you guessed it, male alter ego.

So while even hardcore heads decried Tyler, the Creator’s misogynist songs last year because times are (sort of) changin’, you’d be hard-pressed to get any of them to denounce Dr. Dre’s "The Chronic," which  infamously compared "bitches" to "hoes and tricks.” LL Cool J was famously upstaged by Canibus in 1998 with a dis whose most famous quote was “99 percent of your fans wear high heels.” Few female-friendly (or female, period) rappers have survived a canon that is now mostly agreed-upon: Biggie, Tupac, Nas, Jay-Z, Wu-Tang Clan and Eminem. Icons like Queen Latifah and Lil' Kim sure had their moments in the sun, but their actual recordings have never been pored over at length the way, say, Gucci Mane’s or Cam’ron’s mixtapes are. The two most popular females in rap, Lauryn Hill and Missy Elliott, have mostly left the conversation as they disappeared from view.

Jay-Z  has managed to become a socially  and politically conscious rapper, in a subtle secondary way that doesn’t distract from his cool. He didn’t clap for Rihanna-battering Chris Brown at the Grammys, though he hasn’t elected to state any condemnation beyond that publicly. It’s telling that someone as famous as Jay-Z would feel the need to stay mum, still feeling his clout is secondary to the genre’s maleness. A rookie like Minaj actually has to feature Brown on her record; his feature “Right by My Side” is now the second single.

Ironically, Minaj has spoken out about her desire to avoid talking about sex in her music. Once she graduated from mixtapes to albums, Minaj told interviewers that she would not be singing or rapping about it: “I want people — especially young girls — to know that in life, nothing is going to be based on sex appeal.” Minaj has plenty of tender odes (her first hit “Your Love”) but any time genitals make an appearance it's usually for business rather than pleasure.

She shares this trait with some of the aforementioned alpha males; Jay and Dre have rarely allowed a glimpse into their bedrooms even as they point frantically at how much they have coming in and out of them. Eminem’s love-man asides have been mercifully scarce. One notable exception in the realm of rapper’s rap, however, is Lil Wayne (aka Weezy), who dedicated a whole five minutes on certain editions of his biggest album "Tha Carter III," to a riff on the Cookie Monster and a part of the female anatomy, in which he announces lovingly that “Girl, you food” among other things. The equally polarizing Wayne has been both a major catalyst for Minaj’s career (signing her to his Young Money collective was her big break) and strangely absent from it (missing her smash debut from prison, floundering on his own somewhat while she collaborated with megastars like Kanye).

On "Roman Reloaded’s" final track, “Stupid Hoe,” she ends the entire record with the declaration, “I am the female Weezy.” Unlike the “Aladdin” song, this statement is much less clear. Is the female Weezy a superior one? And will rap ever see a star who aspires to be the male Nicki?