NOM unveiled: It's not pretty 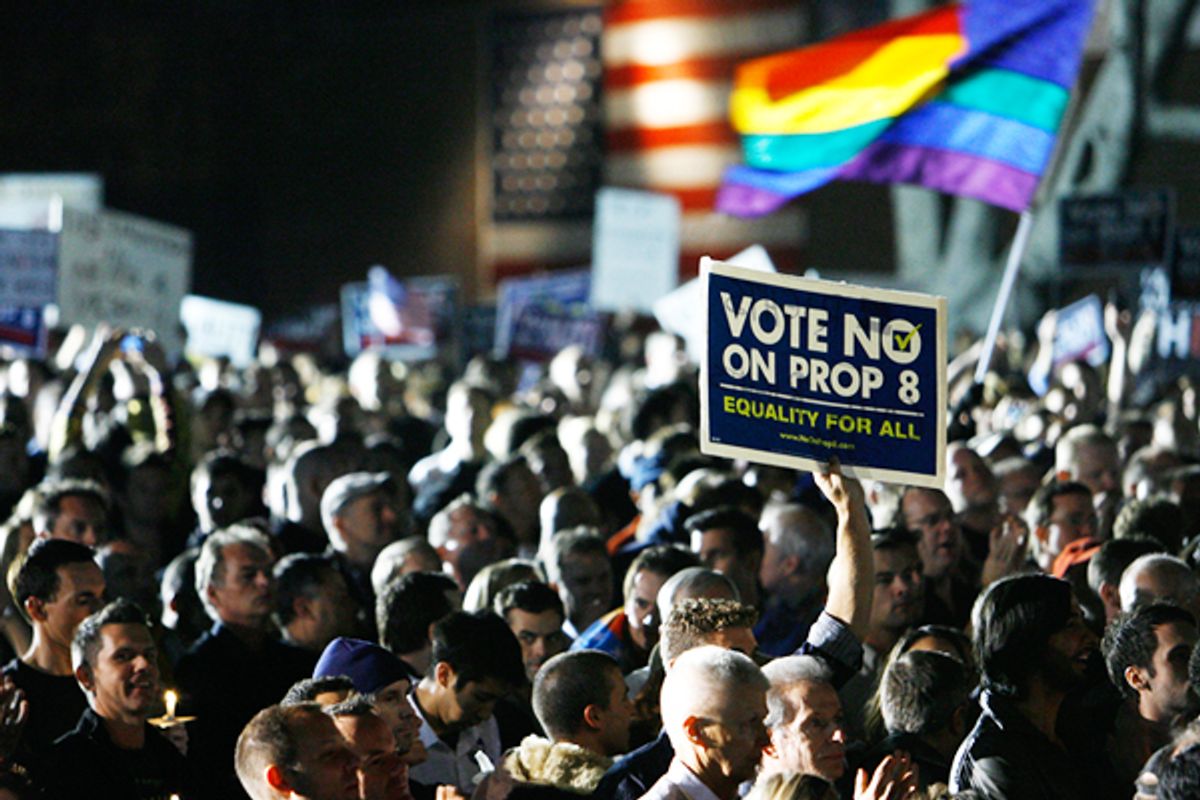 Supporters gather during a "No on Prop 8" rally in West Hollywood. (Reuters/Mario Anzuoni)
--

The National Organization for Marriage, a lobbying organization dedicated to battling the prospect of certain people getting married, recently had some tax documents leaked to the press, via their enemies at gay rights group Human Rights Campaign, which says it received the documents from a "whistleblower." The documents reveal that Mitt Romney's campaign donated $10,000 to NOM right before the 2008 election, when the group was fighting to ban gay marriage in California. Romney's donation was not disclosed in public documents.

The revelation came the week after NOM memos, made public by a Maine court, revealed that they planned to "drive a wedge between gays and blacks" by exploiting religious intolerance of homosexuality. (Another plot involved finding "children of gay parents willing to speak on camera" and denounce their parents.)

NOM remained quiet on these revelations for a while, until yesterday, when NOM sent a press release demanding a federal investigation into finding the person who sent those documents to the Human Rights Campaign. Yes, that will solve everything.

"It appears that someone with either the IRS or the HRC may have committed a federal crime by illegally obtaining and then releasing a confidential tax return of the National Organization for Marriage," said Brian Brown, NOM's president. "It's clear that the tax return was stolen, either from NOM or from the government. The Huffington Post article says that HRC claimed they received the document from a ‘whistleblower.' But the term ‘whistleblower' is completely inapt. We're talking about a criminal who has stolen confidential tax return information. We demand to know who this criminal is, whether they work for the HRC or the IRS, and how they obtained confidential tax information filed only with the US government."

The odd thing, as ThinkProgress and others noticed, is that Brown used the slightly unusual term "inapt," which is the exact word NOM spiritual leader and former head Maggie Gallagher used when she belatedly weighed in on the leaked documents in a National Review Online comment section.

"The documents used language which I would call 'inapt' - - in part because it's tremendously vain to think that I or NOM or any other white Christian conservative can manipulate black and latino church leaders. I don't think so. They speak out of their own convictions and become subject to tremendous vituperative for doing so."

Brown later used essentially the exact same language in the organization's official response to the "wedge" memo release, suggesting that they are really attached to the word "inapt" and that Gallagher is still the brains behind the operation.

Still, NOM is correct that the memo laid out a strategy that mostly involved them not doing anything: They didn't need to convince black social conservatives to be social conservatives. They needed to convince them to work with a white, Republican-led political organization, which it appears that they largely failed to do. (Finding the "victims" of gay marriage willing to denounce their own parents would've surely taken even more effort, and I'm more curious to learn how that project is doing.)

What's impressive is NOM's ability to turn the news that the Republican Party's presumptive presidential nominee gave them $10,000 into yet another story of how the anti-gay movement is the victim of persecution at the hands of the all-powerful gay lobby.

The weirdest part of this entire affair is why Romney bothered to make his donation secret to begin with. His opposition to gay marriage is public, and exploiting opaque campaign finance disclosure rules to mask the donation just guaranteed eventual bad headlines. I guess NOM is such a gross organization that even Romney didn't want to be publicly associated with it.