The true meaning of prep 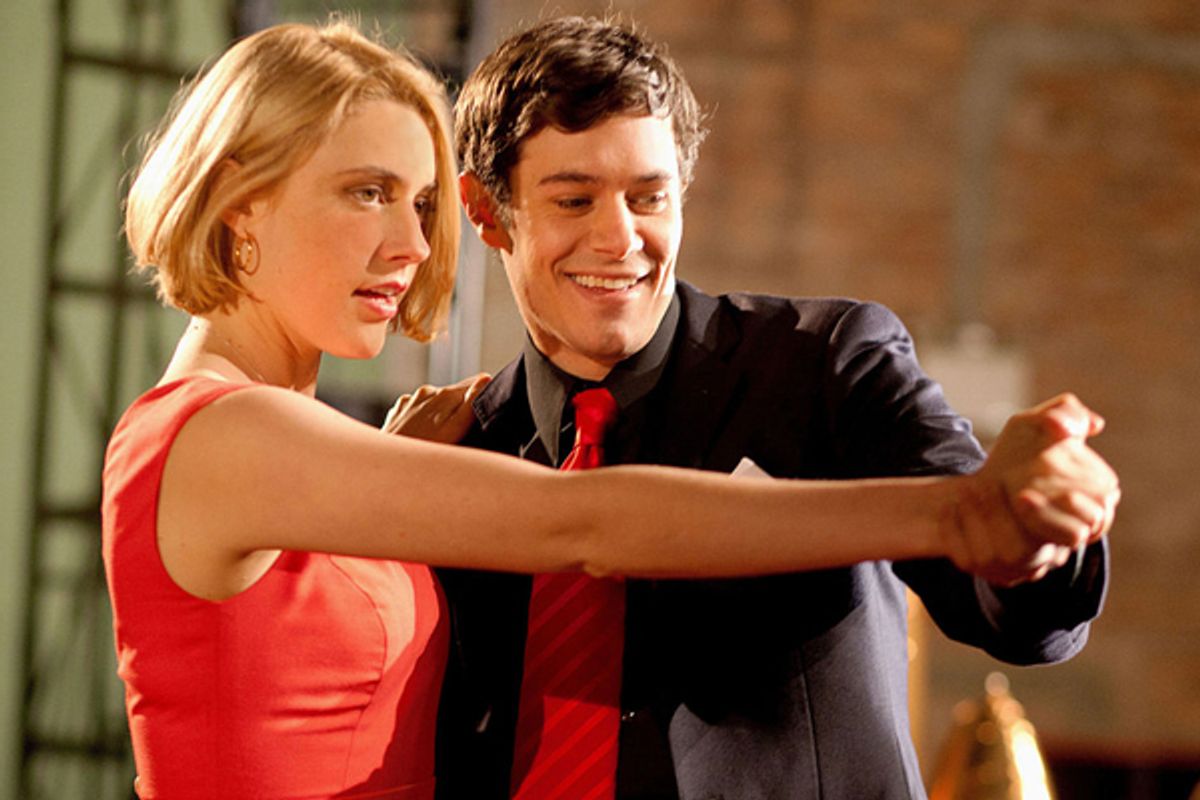 Greta Gerwig and Adam Brody in "Damsels in Distress"
--

You may have heard that the director Whit Stillman, whose fourth movie, "Damsels in Distress," opens Friday, is a chronicler of preppy culture. It’s not true. Stillman makes delightful movies, featuring light, witty scripts spoken by perfectly cast actors. But to consider Stillman an ethnographer of prep is to misunderstand both prep and Stillman movies.

It’s true that Stillman’s characters often wear stereotypically preppy clothing. They can be found in madras plaids, blue blazers, Lacoste shirts and other clothes historically associated with our country’s most selective colleges and the private schools that prepare — hence “prep” — students for them. They mention Brooks Brothers and Sag Harbor in casual conversation. But prepdom, as I understand it, and as I learned it in my own prep school and college, is only partly about clothing. It is more properly understood as an orientation toward power.

Preppies are most basically those people who don’t mind being associated with elite schools and the professions those schools feed into: banking, teaching, government (and one might add sailing instruction and magazine fact-checking). By virtue of the clothes they wear, they express their comfort being associated with a certain kind of cultural prerogative — one that is particularly suspect right now, in the era of foreclosures and Occupy Wall Street.

Stillman's movies, from "Metropolitan" to "Damsels," illustrate bigger ideas about the way preppiness is understood and misunderstood by Americans.

Like members of other subcultures, including Deadheads or Goths or English soccer hooligans, real preppies are at least willing to proclaim allegiances. Some of those allegiances are parochial, and might be represented by, say, a college scarf, while others are broader. But Stillman's characters exist out of time and out of context. They may talk about politics (a bit), and may worry about how the lower classes perceive them, but they ultimately have almost nothing to say about, or even to do with, the institutions that form preppies: the universities, the banks, the government, even the yachting club. They’re all dressed up with no place to go.

Of course, thinking of Stillman as a preppy filmmaker is an understandable mistake. He is heavily responsible for his own inclusion in the pantheon of prep chroniclers, from J.D. Salinger to Louis Auchincloss, and Lisa Birnbach. His 1990 debut, "Metropolitan," was the first movie to treat prep culture with a discerning eye after a decade that, despite the rise of Polo and other preppy brands, saw movie preps only as douffi (the plural of “doofus,” according to "Damsels in Distress"). I am thinking here of the Robert Prescott characters in "Real Genius" and "Bachelor Party," or the golf-club villains in "Caddyshack."

But "Metropolitan" was a shrewd movie about New York City private-school alumni on winter break from preppy colleges. It’s a movie whose plot hinges on a character’s decision to purchase at A.T. Harris the tuxedo he had been renting — after admitting to himself that if he’s to attend more debutante balls, he realizes he needs better threads — but that same character can have a thoughtful, if pretentious, discussion about Fourier. And Stillman, like F. Scott Fitzgerald, has the wit to give his characters names just a rep stripe away from caricature: “Tom Townsend,” “Serena Slocum,” “Rick von Sloneker.”

As if to further identify himself with prepdom, Stillman has always carried himself as a possible model for his characters. To this day, he meets reporters at the Harvard Club, and even when he is some miles away he still looks “like a wayward preppy trying to get into the Harvard Club” — a look, the New York Times Magazine recently noted, that involves “khakis, a white shirt and a blue blazer.” Stillman did, in fact, attend Harvard, which means that he could get into the Harvard Club, and if he had not attended Harvard he ought to have, being named John Whitney Stillman and all.

That willingness to dress a certain way — even when it might get you attacked by punks, as in "Last Days of Disco," or called a fascist, as in 1994’s "Barcelona" — is a meaningful tenet of prepdom. But the clothes are not just an aesthetic choice. After all, it’s the rare preppy who does not know that she is wearing a uniform that, if not actually identical with an elite — anyone with a little money can buy the clothes — signals an aspiration toward elite society. To wear clothes made popular by the Ivy League is to announce an affirming attitude toward the Ivy League. That may not be a popular stance to take right now. For good reason, our country’s financial elite is under attack, and the schools that breed that elite deserve some of the opprobrium.

But preppy clothes have been the uniform of other products of the university, too, not just the bankers. Who loves a tweed jacket more than a humanities professor? And who loved a sack suit more than the elegant political radicals of the early 1960s? Take Malcolm X: For him, conservative attire was not ironic but proprietary. His clothes announced that he, and the Negro more generally, was entitled to the uniform and the prerogatives of power. Preppiness, in other words, is not inherently reactionary, and it is not inherently exclusionary; indeed, in a sense it is very democratic, precisely because one only needs the clothes, not a family crest. But it is not demotic; it is elitist. It is concerned with access to hierarchies, not the abolition of them. There have been left-wing preppies, but there have rarely been populist preppies.

In Stillman’s movies, however, preppiness almost never carries this complicated, interesting philosophical baggage. There are movies far less accomplished that nevertheless have more to say about the contradictions of prepdom. "School Ties" examines the anti-Semitism that used to pervade prep schools; "Igby Goes Down," the nihilism and dysfunction of Manhattan private-school culture; "Dead Poets Society," intellectual conformity; "Love Story," the class chasm on Ivy League campuses. "The Rector of Justin," the 1964 book by the dean of preppy novelists, Louis Auchincloss, depicts a rotten ethical core at the heart of a Groton-like boarding school. These works vary in quality, but they at least treat prepdom as the site of interesting, and often timely, dilemmas. They feature preppy clothes aplenty, for authenticity and because the clothes are beautiful to look at. But the clothes are just the superficial signifier of preppiness; the movies are about much more.

Stillman uses preppy clothes for an entirely different purpose.The clothes round out his characters, give the audience shorthand for what kind of families the characters come from, but above all take them out of time. For Stillman, preppy clothing is not a way to evoke, say, a Kennedy-era boarding school, but rather a way to defeat dating altogether. In short, if you wanted to make a fantasy movie set in some unidentifiable period of postwar America, you could use certain articles from Brooks Brothers and J. Press. And, indeed, that is what Stillman, who is not a realist or ethnographer but a fairy-tale fantasist, has done.

Consider "Metropolitan." A screen card at the beginning says that it is set “not so long ago.” The characters seem to have late-20th-century diction — they don’t have the quasi-Brahmin speech patterns that persisted in the Ivy League into the 1960s (see the young John Kerry here) — but the yellow cabs are of an earlier vintage. The lapels on the men’s jackets are neither early-1960s narrow nor late-1970s wide. But the cut and the shoulders are not from the 1980s. Like the women’s gowns, the men’s dinner jackets are, in fact, designed to straddle all eras while beholden to none. It turns out that there are few styles harder to date accurately than the clothing appropriate for a debutante ball, or the preppy casual clothes one relaxes in afterward. The mystification of time continues in "The Last Days of Disco," which according to the screen in the beginning occurs “in the very early 1980s,” but shows footage of the Disco Demolition Night held at Comiskey Park in July 1979.

In all Stillman's movies, there is no racial or religious tension, no class envy, no religious bigotry. Stillman’s world even lacks many of the interlopers who have kept prep schools and elite colleges vital and meritocratic (and fashion-conscious): There are no obviously Jewish characters in Stillman’s movies, no Asian Americans, only one black character who so much as gets a name, and no gay men or lesbians.

There is nothing wrong with Stillman’s World, this alternate reality in which conversation is snappy, the young men and women are all attractive, and their clothes are tailored awfully well. There are times when I would not mind living there. But that’s because it’s a Utopia, literally a nowhere — it does not exist, it cannot exist. That the resident characters wear certain clothes we associate with certain schools, certain professions, certain vacation spots and certain stores does not mean that these characters are like the real-world people found in those schools, work professions, vacation spots or stores. Whit Stillman characters are not preppies; they just dress like them.

But more than ever, what is true of Stillman’s characters may be true of anyone wearing preppy clothing in America today: He is not exactly a preppy. It’s not that he lacks money or schooling — after all, the majority of preppies were always aspirational, rather than bred. It’s that the statement he is making has nothing to do with elite institutions or power. In fact, preppiness today is a way to avoid those conversations.

To wear such timeless clothing in 2012 is a bit like wearing very preppy clothing in 1970, when Whit Stillman was in college. Outside the haberdasher’s doors, there is warfare, recession and class anger; but on one’s back there are the clothes of another era, indeed clothes that transcend all eras. In a time of tumult, preppy clothing is escapist. It does not imply that its wearer is a conservative or a 1-percenter or opposes birth control for women. But it does suggest that, at least for the moment, he would rather talk about something else — as if it were a few years ago, or a few years from now. As if talking about something else were ever really possible.