Breaking: Portland's not that cool, L.A. not that superficial

We make assumptions about cities every day -- that L.A. is superficial, Portland super-hip. Most of them are wrong 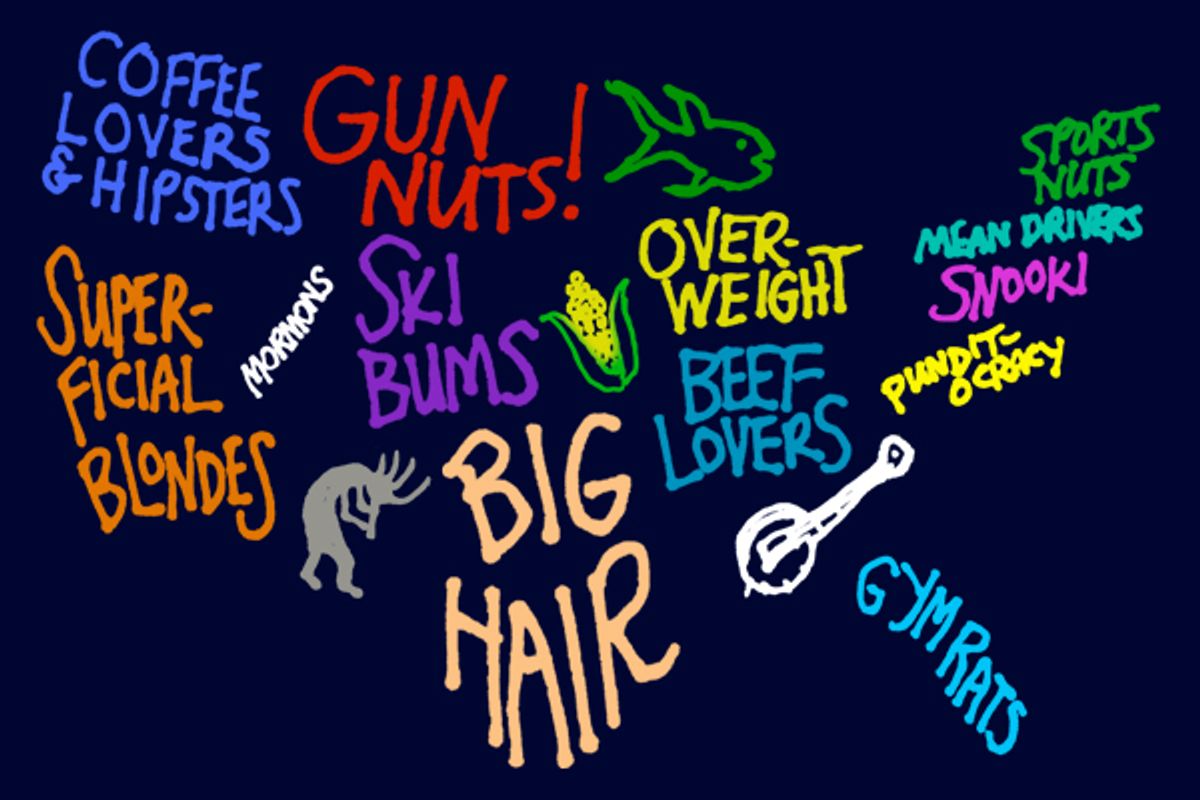 No one likes a stereotype, unless it's about someone else -- then it's hilarious. Los Angeles? Celebrity-obsessed lipo-junkies. Portland? Hipster snobs. Boston? Sports fanatics who think that a win for the Sox somehow makes them winners, too. There's nothing really wrong with these stereotypes -- in fact, they give each city a unique cultural identity. How true they are is another matter. So in wildly unscientific form, we decided to look at the data. This is just for fun, so try not to take it too seriously and freak out. We're looking at you, New York.

Sun-baked idiots who care more about Beemers and boob jobs than culture and current events. That's how we think of Los Angeles, but it more aptly describes a more God-fearing locale: Salt Lake City, which has the most plastic surgeons per capita, Googles the phrase "breast implants" with alarming frequency, and spends more money on both cars and cosmetic procedures than any other city in the nation.

How the Mormon mecca became a nip-tuck town is a bit of a mystery -- one theory is that moms here tend to be younger, which leads to more "mommy makeovers." And though it's tempting to assume they spend more on their cars because they need snow-friendly SUVs, cities like Denver and Albany, N.Y., spend far less on theirs.

Point being, Los Angeles doesn't deserve its superficial rep any more than lots of other cities. Washingtonians blow more money on clothes. Atlanta gets more hair transplants. New Orleans watches more TV. And of the 50 biggest cities, L.A. has the 11th most college degrees per square mile. "As someone who's lived in both New York and D.C., I can say with certainty that Los Angeles is no more shallow than either of those two cities, both of which are considered to be loci for deep and thoughtful people," says Cord Jefferson, staffer at Los Angeles-based Good Magazine. "Shallow people live everywhere, and there's not a surplus of them in L.A."

Lots of stats support this, but one blew our minds: Despite having the league's highest ticket prices, the last Red Sox game that didn't sell out was played in 2003. The 712-game sellout streak has become baseball legend, and it's well earned -- a full one-third of the city attends a Boston pro-sports event every year. As such, the city's rabid fan base is seen as an advertising gold mine. A marketing study of 81 cities pegged Boston's pro-sports fans as the nation's most passionate, with two-thirds identifying as "avid." Brand Keys Inc., a company that studies customer engagement, compiles an annual Sports Fan Loyalty Index, and only Boston's teams regularly make the top five in all of the major pro-sports categories.

New Yorkers have a reputation for driving like they're being chased by a tidal wave. But by the numbers, New York motorists appear to be less dangerous than those in several other cities. According to Allstate Insurance, drivers in Philadelphia, Washington and Los Angeles suffer more collisions per capita. And Orlando, Fla., drivers kill far more pedestrians (though pedestrian-unfriendly infrastructure surely plays a part in this).

So why the sense of mayhem? New York City cab driver Eugene Salomon points to a taxi-dominated streetscape, where drivers are both in competition and paid by the mile-per-hour. "In those off-peak hours it's a horse race to find the next fare," he says. Plus, Manhattan is flooded with drivers from New Jersey, who are more crash-prone, says Allstate.

But New Yorkers needn't boast. They scored dead last on a recent nationwide rules-of-the-road quiz. And the NYPD often seems more concerned with ticketing bicyclists than enforcing safe driving. Salomon, for his part, thinks the worst drivers are in L.A. "I felt intimidated on their damned expressways," he says. After that, however, "I'd say New Yorkers are the second craziest."

Miami is all gym rats

Would that Miami were a perpetual Spuds Mackenzie-era beer commercial. Alas, it just ain't so, says the 10-days-to-better-abs bible, Men's Fitness. In 2009, the magazine ranked Miami as America's fattest big city, with over 60 percent of its residents at risk for weight-related health problems. Miami also has three times as many fast-food joints as the national average. And though lots of Miamians own gym memberships, fewer than average actually use them. The city's high poverty rate correlates with its high obesity numbers.

Miami-based personal trainer Shuichi Take sees the gym-rat stereotype as stemming from the outsize visibility of hot spots like South Beach, as well as the city's "semi-legitimate modeling scene." The weather also makes Miami a prime spot for the type of sports pursued by the shirtless and beautiful. "Volleyball, paddle boarding, kite boarding, wake boarding," says Take, "Miami is an outdoor-activity town."

Las Vegas is filled with gamblers

The Strip may be for tourists, but Vegas locals gamble, too. According to a study conducted by the Las Vegas Convention and Visitors Authority, gambling and going to the movies virtually tie as Clark County residents' two preferred ways to spend time. Nearly two-thirds of the city's residents gamble occasionally. By comparison, only a quarter of Americans gambled in a casino in 2010.

Anthony Curtis, president of the city guide LasVegasAdvisor.com, thinks those stats give a warped perception of life in Las Vegas, which he says is thoroughly pedestrian for the typical resident. "People here do everything they'd do in Detroit or Atlanta or anywhere else," he says. "Sometimes they may go to a show or a comedy club and it happens to be in a casino, and while they're there they'll put twenty bucks in a machine."

Everyone in Salt Lake City is a Mormon

It's not the holy land it used to be; less than half the city follows the Church of Latter-day Saints, and Utah as a whole is only around 60 percent Mormon these days. Statewide, the percentage of Mormons has been declining for years, according to secret church membership counts obtained by the Salt Lake City Tribune in 2005. Experts attribute the drop to Hispanic immigrants moving to Utah for jobs, not religion. If current trends continue, Utah will lose its Mormon majority by 2030.

Local non-Mormon Steven Kachocki thinks the city is slowly becoming more progressive as a result. "Although we suffer from alcohol-deprivation, there certainly seem to be more same-sex couples than there were even five years ago," he says. "As it is with our sense of style in Utah — about 10 years behind the rest of the country -- so will be our move to more liberal thinking."

Portland is all hipsters

In 2001, the Portland Oregonian reported that sales of Pabst Blue Ribbon -- at the time, an obscure beer associated with blue-collar roughnecks -- were inexplicably soaring in Portland. PBR soon caught on everywhere else, and the city has been seen as a hipster epicenter ever since, spawning dedicated blogs, newspaper Style section paeans and a satirical TV show.

The conventional wisdom that Portland is filled with hipsters is deserved, thinks Michael Andersen, publisher of Portland Afoot: "More so than anywhere else I've lived," he says. And several hipster-correlated metrics do seem to confirm the stereotype (using, of course, more stereotypes): The city has the highest percentage of bicycle commuters in America, PETA ranks it as the country's second veggie-friendliest city, and Oregon -- at least as of 2008 -- remains the world's top consumer of sweet, goes-down-smooth PBR.

Portlandians can be sensitive to the hipster label. "As I understand it, hipsters are young creative people who aspire to a kind of independent culture," says Marc Moscato, an artist, curator, activist and president of the Dill Pickle Club, a nonprofit that organizes educational projects about Portland. "But there's sort of a negative connotation to the word too, some even going so far as to say they [hipsters] are ruining Portland by the increasing gentrification and displacement." Which is ironic, since Moscato and Andersen both believe it's the city's affordable housing that draws the young and creative. Before you know it, those PBRs will be two bucks a can.