Did MoveOn rip off Occupy? 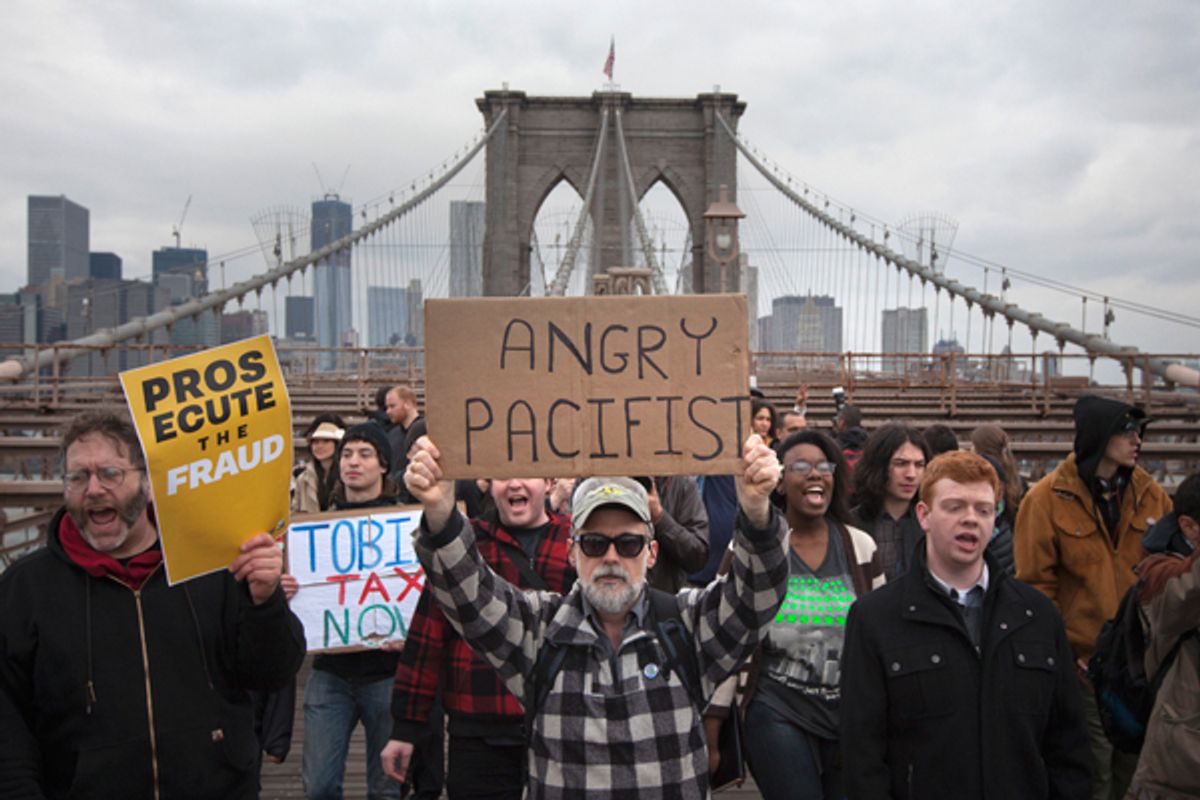 “The 99 Percent Spring” certainly appears like an Occupy Wall Street campaign. The effort -- to give nonviolent direct action training and teach-ins on income inequality and Wall Street malfeasance to 100,000 people across the country between April 9 and 12 –- sounds born of a general assembly, from the emphasis on putting "bodies on the line" to the calls to "rise up" in the face of corporate hegemony.

It’s unsurprising then that some media reports described it as Occupy’s new tactic; and although numerous individuals involved in Occupy are taking part in the spring trainings, an Occupy Wall Street initiative this is not. The 99 Percent Spring is spearheaded by MoveOn.org and supported by around 60 progressive nonprofits and major unions, including the AFL-CIO, the Teamsters, Greenpeace, the Working Families Party and Van Jones’ Rebuild the Dream organization.

Inside Occupy’s (now-figurative) camps, cries of “co-optation!” abound. The fear, expressed by numerous Occupy participants I spoke to in different cities, is that the 99 Percent Spring trainings will steer energy away from Occupy spring actions and toward support for the Democrats this coming general election. Many still believe that MoveOn, as a recent CounterPunch article put it, is a “front for the Democratic Party.”

Long-term OWS participant and writer Jeff Smith said that although there are a number of “excellent groups” supporting the 99 Percent Spring initiative -- (“The Institute for Policy Studies, for example, does excellent work,” he noted) – he has his reservations about the effort and how it will impact Occupy. According to Smith, the institutionalized left-liberal groups bottom-lining the 99 Percent Spring risk “misdirecting, co-opting and ultimately trivializing” the grass-roots protest actions – like those of Occupy – which they say inspired the mass training effort.

“Every action we've engaged in has inspired copycats, and there's nothing wrong with that; it shows that we're having an effect on the mainstream,” said another long-term New York-based Occupy supporter, Patrick Bruner. “It is strange, though, that these institutions feel the need to rebrand our ideas instead of supporting us. Sadly, it seems as though many NGOs are only interested in supporting social justice movements if they can get something in return,” he added. It’s worth noting that, in line with Bruner’s concerns, the 99 Percent Spring makes no mention of the May Day General Strike -- Occupy’s biggest day of action and solidarity planned so far for 2012.

Yet supporters and organizers of the 99 Percent Spring effort are keen to allay fears of co-optation. “In case it hasn’t been made clear enough, MoveOn is not part of the Democratic Party, nor part of the DNC. It has 7 million members, many of whom have been very involved in their local Occupy groups,” said Laura Dawn, an organizer with MoveOn who co-produced the art and music event "All in for the 99 Percent," which I have written about with some skepticism before.

Through their bravery, the folks in Occupy Wall Street put political and economic inequality at the center of the national conversation last fall. And we're seeing it again now in response to the killing of Trayvon Martin, with students walking out of classes demanding justice, and raising the profile of the issue. That's the sort of people power the 99 Percent Spring will multiply across the country.

And indeed, many Occupy supporters fearing co-optation by liberal institutions and Democrats have been pleasantly surprised by the content of the 99 Percent Spring training plans – namely that elections are not mentioned, and there is no single predetermined event or action that the direct action trainings are geared toward.

It seems to me that the 99 Percent Spring does indeed complement large sections of Occupy efforts – the sorts of actions, accessible to media narratives, that directly protest institutions like Bank of America, ALEC or rulings like Citizens United. And it's certainly providing a space for celebrities to step back into the activism limelight denied them by Occupy's eschewing of representatives (see, for example, the cringe-producing 99 Percent Spring promotional video featuring that dweeby guy from "Gossip Girl").

However, as East Bay activist and Ph.D. student Mike King noted in CounterPunch, the 99 Percent Spring and similar efforts could serve to “defang” Occupy; to neutralize and steer individuals away from more militant action into “non-threatening” civil disobedience aimed at winning concessions from banks and government bodies.

“If successful, this [the 99 Percent Spring] will undoubtedly serve as a wedge over tactics, exacerbating the ‘good protester / bad protester' trope that is always used, and that we have heard in the last few months already – from liberal mayors to Fox News and everywhere in between,” wrote King.

King’s view – which has support among the large anarchist contingents, many of which were instrumental in shaping Occupy’s horizontal, rheizomatic framework – gives the lie to the idea that everyone involved in Occupy at base wants the same thing. The 99 Percent Spring efforts may well tease out some irreconcilable differences between self-defined occupiers: those interested in using civil disobedience to raise awareness and force reforms (the 99 Percent Spring folks) as opposed to those who see Occupy as creating conditions to forge political and social affinities – to create new spaces – outside of and, crucially, in conflict with preexisting institutions.

The fear, then, is that the 99 Percent Spring of “people power” multiplying across the country will do so in a way that lacks the radical and experimental nature that characterized what many of us saw to be Occupy’s most important and beautiful moments.