John Derbyshire has been writing racist screeds for years. So why did no one notice until last week? 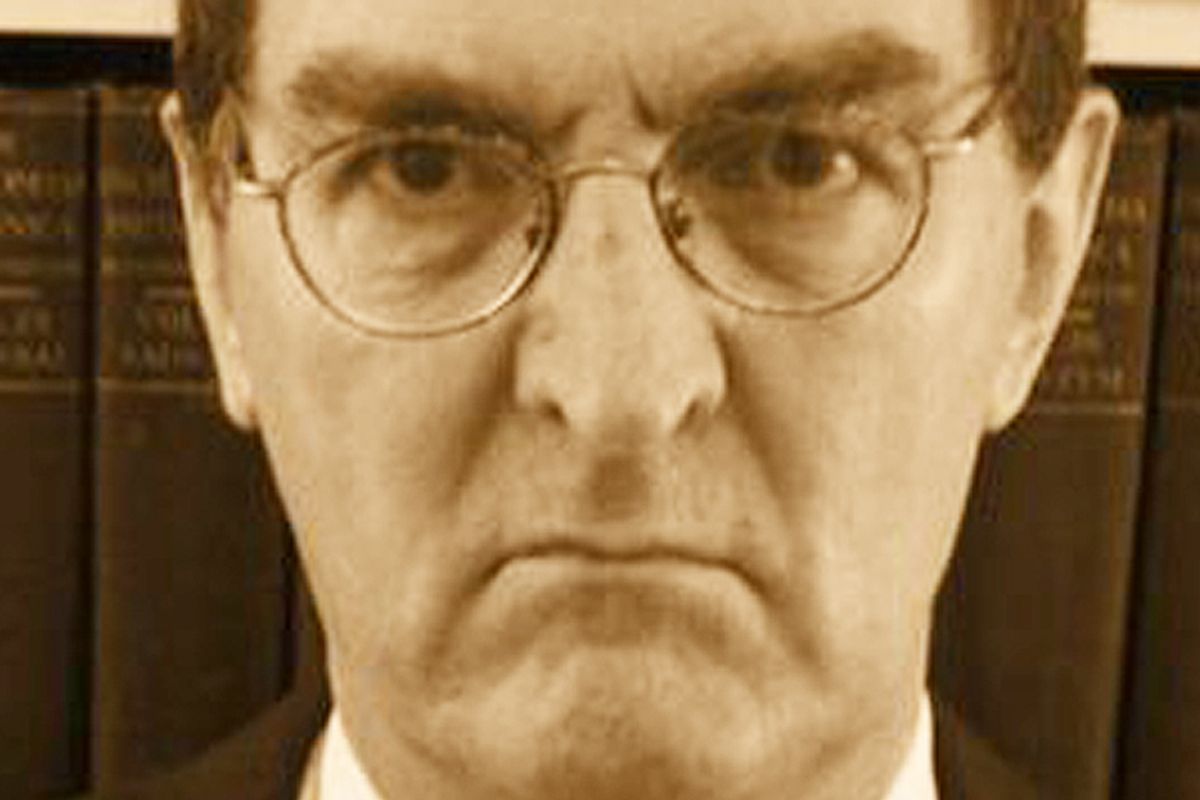 Like any old friend of a publication's founder who considers it his right to contribute lazy nonsense only when it pleases him, John Derbyshire seemed to pop off from his National Review perch for weeks or months at a time. He would eventually resurface on National Review Online, perhaps touting a playful new book on the apocalypse, to share his oddball musings on various affairs while his more dependable, hawkish colleagues busied themselves with outrage at the Democratic Party. A latter-year blog post from Derbyshire -- "Derb" or "The Derb" to colleagues and critics alike -- would usually go something like, "My flowers have just come in, looking a bit limp I must say. Did you hear about this latest fashion preoccupation among teenage girls? Nor did I. Watch out for the blacks." These blasts of Derbitry had become the only reason to visit National Review Online, reliably providing rich material to satisfy the daily fixes of outrage and mockery.

So it's a shame -- well, not really at all -- that the Derb Days have reached their natural and necessary conclusion. Derbyshire, see, had been skipping out at night and giving his best stuff to the fringy online magazine Taki, where last week he published the most vile exercise in long-form racism in recent memory.

In the end, Derbyshire had to go so far as to write out an impressively comprehensive, bullet-pointed listicle of the dozen or so most unforgivable racist tropes in the book before National Review editor Rich Lowry finally felt compelled to fire him. The Derb had been sprinkling his work with little racist nuggets of this sort in his work for ages, of course, but one could argue that it took such a bombastic compilation of overt, resurrected hate speech to see the man in full.

Derbyshire was "going for something" in this piece,"The Talk: Nonblack Version." Somewhere deep beneath the waste lay a newsy peg which Derbyshire found ripe for botched satirization. He was riffing on frequent mainstream media stories about "the talk" that many black parents feel obligated to give their teenage sons about how their normal behaviors can be perceived as threatening in a country with such a long legacy of racism. Don't sneak up on people, don't lose your temper, don't mouth off a cop, and so on. If, for whatever reason, a pundit felt the burning need to push back against this particular newsroom trend piece favorite, there could be unoffending ways to do so: Sometimes the story loses such a sense of balance that the writer/reporter never bothers to say, for example, "of course, many, many white cops take their responsibility seriously and are not constantly seeking to arrest black teenage males on the capital charge of walking down the sidewalk."

Derbyshire took a different tack: Reversing the roles and writing "the talk" that he could give his son -- who's of "mixed north-European and northeast-Asian" descent but who he says will be considered "white" by "blacks" -- about encountering black people. What grand insights would Derbyshire share with his kids? That black citizens should not always be entitled to your courtesies due to "considerations of personal safety." A black American is more prone, according to the discardable pseudo-science that Derbyshire can't get enough of, to "antisocial" behaviors, as reflected in "school disciplinary measures, political corruption, and criminal convictions." And many "blacks" -- this is where The Derb really begins to find his groove -- feel abnormal "hostility… toward whites." Some ("in my experience, around five percent") are so "ferociously hostile to whites" that they will "go to great lengths to inconvenience or harm us." And of course, "The mean intelligence of blacks is much lower than for whites."

Bringing us to advice portion of The Talk (Derb Remix): "Avoid concentrations of blacks not all known to you personally." "Do not settle in a district or municipality run by black politicians." "Do not act the Good Samaritan to blacks in apparent distress, e.g., on the highway." Search far and wide for that rare gem, the "intelligent and well-socialized black," abbreviated IWSB, who can serve you as "an amulet against potentially career-destroying accusations of prejudice."

Such a piece could pass as satire -- dumb conservative satire, yes -- if not for the fact that anyone who's read Derbyshire's work knows that he believes and abides by all of these over-the-top scary black people stereotypes. He most likely does give this racist talk to his teenage kids in total seriousness!

Each flare-up of Derbitry presents an opportunity to guide the uninitiated through a tour of the classics. There are several more varieties of Derbitry than horrendous racism circa 1890. We've also got sexism, homophobia, pedophilia and plain old cruelty all around! But first, who wants a little more racism? Since Derbyshire even calls himself a "racist," he'll be flattered. Perhaps this lecture that he delivered in person to the University of Pennsylvania law school's Black Law Students' Association -- black Ivy League lawyers-in-training! -- about the natural inferiority and criminality of African Americans, as determined by his beloved pseudo-science:

We see the same differences in traits that we don’t think of as directly physical, what evolutionary psychologists sometimes refer to as the “BIP” traits — behavior, intelligence, and personality. Two of the hardest-to-ignore manifestations here are the extraordinary differentials in criminality between white Americans and African Americans, and the persistent gaps in scores when tests of cognitive ability are given to large population samples.

On the lady front, there's the time he made The Case Against Female Suffrage:

“What is the case against female suffrage?” [Alan] Colmes asked.

“The conservative case against it is that women lean hard to the left … They want someone to nurture, they want someone to help raise their kids, and if men aren’t inclined to do it — and in the present days, they’re not much — then they’d like the state to do it for them.”

And why should selfish women deserve such a right if they're going to stop being attractive around that age anyway?

It is, in fact, a sad truth about human life that beyond our salad days, very few of us are interesting to look at in the buff. Added to that sadness is the very unfair truth that a woman's salad days are shorter than a man's — really, in this precise context, only from about 15 to 20.

And let's give him a chance to explain why he once adopted the oxymoronic label of "mild, tolerant homophobe." As with so much of Derbitry, he drops his most beloved neutral-sounding word, "antisocial," to serve as an amulet against the prejudice clobbering all surrounding words:

Male-male buggery has been proscribed in every society that ever existed. I am inclined to think that there are good reasons for these universal prohibitions. To say the least of it, male homosexuality is very unhealthy–much more so than, for example, cigarette smoking … Homosexuality both male and female is also antisocial, in a profound sense.

We don't have time to delve into the thick anti-immigrant file, or more exotic niches like the "Virginia Tech students were cowards for not fighting back." Take the keys to the archives and research on your own time.

But only now, after the publication of his "Here Are Thousands of Racist Words" masterpiece, has "The Derb" finally become a household name across the broad political junkie nerddom. Readers here and elsewhere are poring en masse through Derbyshire's past offenses, and many will ask the same question: Why did National Review wait so long to boot this chap from the world of major conservative media that he effectively had to do it himself in such dramatic fashion?

No editor likes to cause a scene, we guess. Firing Derbyshire over any one of the smaller, not-fatal-on-its-own prejudicial infractions would have commenced an avalanche of conservative howling about the week-kneed National Review editor kowtowing to wussy liberals' stupid PC prohibitions against horrible prejudice. My guess was always that if a parting of ways ever came, it actually would have been over Derbyshire's occasional "moderate" breaks with Republican orthodoxy -- as was the case in the divorces with Kathleen Parker, David Frum and Christopher Buckley. Among other things, Derbyshire is pro-choice, turned against the Iraq War and even believes that tax cuts reduce tax revenue. These occasional bouts of nonconformity and his lack of importance to The Movement probably did, however, make it easier for so many conservative pundits to throw him under the bus this week without fearing a backlash about caving to the Left.

Or so they thought. Read the comments section on any conservative pundit's denunciation, and you'll still see stunning near-uniformity about how Derbyshire's screed made perfectly accurate points that we all know are true and needed to be made if this country is to survive.

The problem is much bigger than any one Derb.

UPDATE: The article originally stated that Derbyshire's son was white. Derbyshire's children are in fact mixed race, white and Asian.