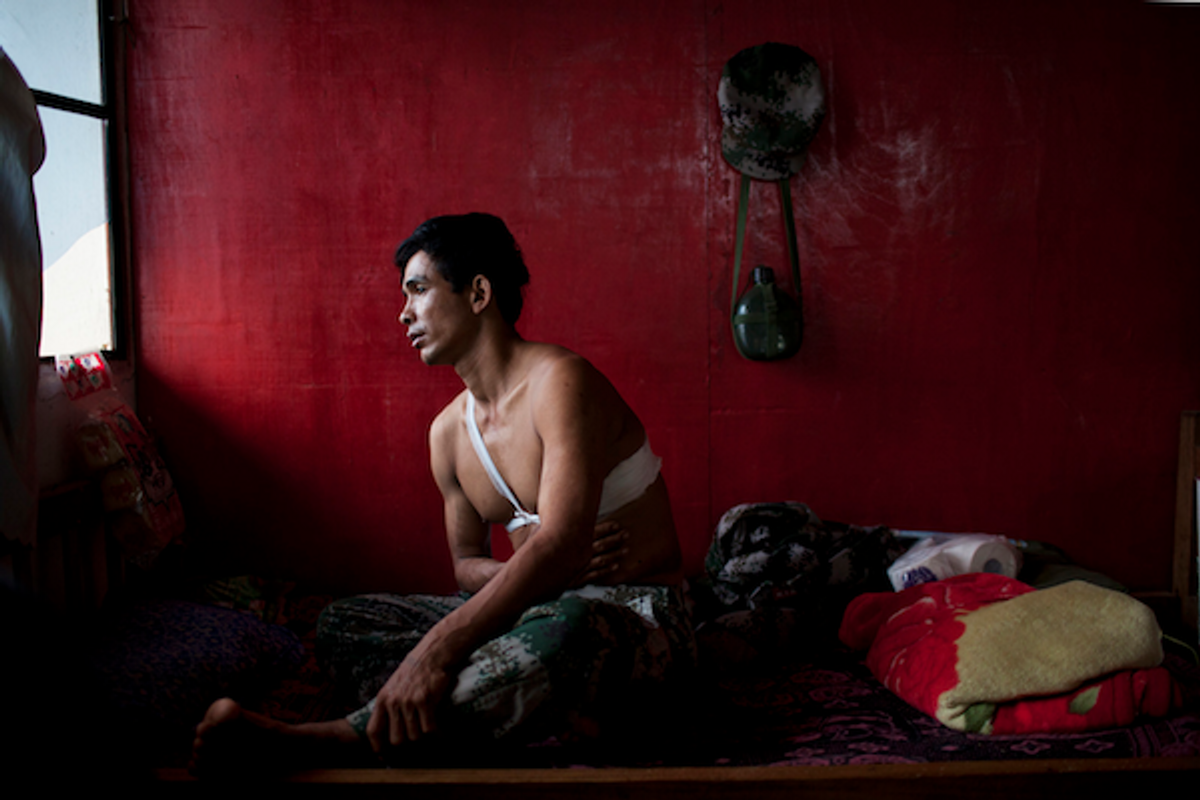 Saw Htet Aung, a 42-year-old soldier in the Kachin Independence Army, recovers at Laiza Military Hospital, near Laiza, Burma, March 30, 2012. Saw Htet Aung was shot in the torso while on patrol in Ban Dawng, on March 21, 2012. (Will Baxter/GlobalPost)
--

Despite the political reforms that have captivated attention in other parts of Myanmar, this dusty village remains a ghost town, abandoned last year when clashes broke out between the Myanmar military and ethnic Kachin rebels, who began their fight for independence in the 1960s.

With most of its residents gone, the village now lies along a bloody ethnic fault-line in the country’s north, a fortified encampment threaded with foxholes and trenches.

Last week, the election of democracy icon Aung San Suu Kyi to parliament triggered scenes of jubilation across Myanmar, but little of this optimism has trickled through to Laja Yang.

The soldiers were on high alert one morning last week after gunshots rang out behind enemy lines. That time, at least, it was a false alarm — Myanmar troops were soon spied hauling a freshly-slaughtered cow back to camp — but the wider conflict in Kachin State, which lies along the Chinese border in northern Myanmar, shows no sign of abating.

Clashes have been raging here since June 2011, when a 17-year ceasefire between the KIA and the Myanmar government collapsed into armed conflict. Fighting since has been sporadic but deadly. More than 150 KIA troops have been killed in hundreds of jungle skirmishes, and tens of thousands have been driven from their homes.

“They came into the village and burnt everything down,” recalls La Htaw La Ring, a 39-year-old KIA soldier whose home in Nam San village was destroyed by government troops in October. “Everything they saw in the village they shot — even the dogs.”

Since gaining independence in 1948, Myanmar (formerly Burma) has been in a state of near-constant civil war with a raft of ethnic militias seeking independence or autonomy from central control. But the stakes are especially high in Kachin State, a region rich in jade, gold and timber, with surging rivers that are being dammed by Chinese hydropower projects.

Under a 1994 cease-fire agreement, large swaths of the state were controlled by the KIA, which claims to have up to 20,000 men under arms, while the KIO used tax revenues to fund an autonomous statelet in the mountainous territory along the Chinese border.

At the moment, however, the Kachin rebels are under siege. Since June, the Myanmar military has forced the KIA back into its core regions along the Chinese border. As the fighting has escalated, the zone has been put on a war footing. The KIA has shifted its command headquarters to a hotel in Laiza, the Chinese border town that serves as the capital of independent Kachinland, while men and women of all ages have volunteered for military service.

Shang Hting Tang is one of 225 new recruits graduating from the KIA’s basic military training course — a 56-day boot-camp in which volunteers learn basic military maneuvers and attend lectures on Kachin history.

But there are few fresh faces in this crowd of cadets. Like Shang, many of the recruits are middle-aged farmers driven from their land by the fighting. “I don’t want to kill Burmese troops, but I want to defend our country,” the 42-year-old says after the one-hour graduation ceremony, which comes to a close with a full-throated rendition of the Kachin national anthem.

Since the outbreak of fighting, human rights groups have accused Myanmar troops of pillaging and destroying Kachins’ property, and shooting at unarmed villagers with small arms and mortars. Around 75,000 Kachins have fled their homes since June, according to a recent report by the US-based Human Rights Watch, hiding in the jungle or seeking refuge in some 30 camps for the displaced in KIO-controlled areas.

Despite a recent visit by United Nations officials, the Myanmar government continues to block outside aid to the KIO areas. At Jeyang, a camp outside Laiza that houses 5,800 displaced people, food, building materials and other supplies are beginning to run low.

“Some people have fled to the Chinese side, but the Chinese authorities don’t take care of them,” says Doi Pyi Sa, the head of the KIO’s relief operations. “If the conflict lasts much longer, there will be many difficulties. We can’t survive without international help.”

Many outside observers, however, are paying more attention to developments elsewhere. Since March 2011, President Thein Sein, the country’s first civilian leader in half a century, has captivated international attention with a series of political reforms that are pushing many Western nations to relax long-standing economic sanctions.

There has also been the appearance of progress on the ethnic front. In January, the government signed a historic cease-fire with the Karen National Union, the world’s longest-lasting insurgency. It has concluded a similar agreement with the 7,000-strong Shan State Army (South), in addition to smaller ethnic Chin, Mon and Karenni groups.

In a state of the union speech delivered last month, Thein Sein called for an end to “misunderstandings and doubts” among Myanmar’s ethnic groups, and made unprecedented calls for ethnic equality.

But whatever the progress elsewhere, relations with the Kachin have deteriorated under Thein Sein. Three months after he took office in June, fighting with the KIA erupted close to a Chinese-built hydropower project and quickly spread to other parts of the region.

In December, a presidential order for the Myanmar military to halt fighting ahead of peace talks was apparently ignored, casting doubt on whether Thein Sein, a former general, has any control over Myanmar’s powerful military.

Meanwhile, Kachin leaders doubt the sincerity of Thein Sein’s ethnic charm offensive. Samlut Gam, the KIO’s head negotiator, says the Myanmar government is pressing hard for a cease-fire agreement it can present to Western nations as proof of “progress” on the ethnic issue. “They want us to sign a cease-fire agreement quickly, but we want to make a political dialogue and sign a more permanent kind of agreement,” he says.

KIO spokesman Kumhtat La Nan says that the government’s strategy is to force the KIA and other ethnic groups to disarm and abandon their push for self-determination. As a stick, it prevented Kachin parties from registering for the November 2010 national election and postponed last week’s by-election vote in Kachin constituencies, citing the security situation — something he denies would have prevented voting.

“The military guys just changed their uniforms, but they’re using the same strategy,” he says, sitting in the KIA’s command headquarters under a banner that proclaims “God is Our Victory.”

But while the recent talks with ethnic groups are overt signs of progress, a recent briefing by the Burma Center for Ethnic Studies argues that overcoming six decades of conflict could take years.

“For the last 60 years all parties have been so heavily involved in waging war that they have little understanding of what is required to maintain peace,” it states.

In the meantime, the Kachin are digging in for a long fight.

After 10 days of being battered by mortar and small arms fire, a tranquil calm prevails at a small KIA post behind the Nam Sam front. Off-duty troops strum a guitar and sing military songs as the light fades, sipping a traditional cocktail of rice whisky and fresh deer blood.

Like elsewhere, many of the troops here are recent civilian recruits, including several KIA veterans who dusted off their old uniforms and re-enlisted after the fighting restarted. One of the them is Capt. Len Aung, 64, a 38-year veteran of the KIA, who seems unfazed at having his 10 years of retirement interrupted by a return to the barracks life.

“We can’t stay here peacefully,” he says, “so I’ll keep fighting until my last breath.”