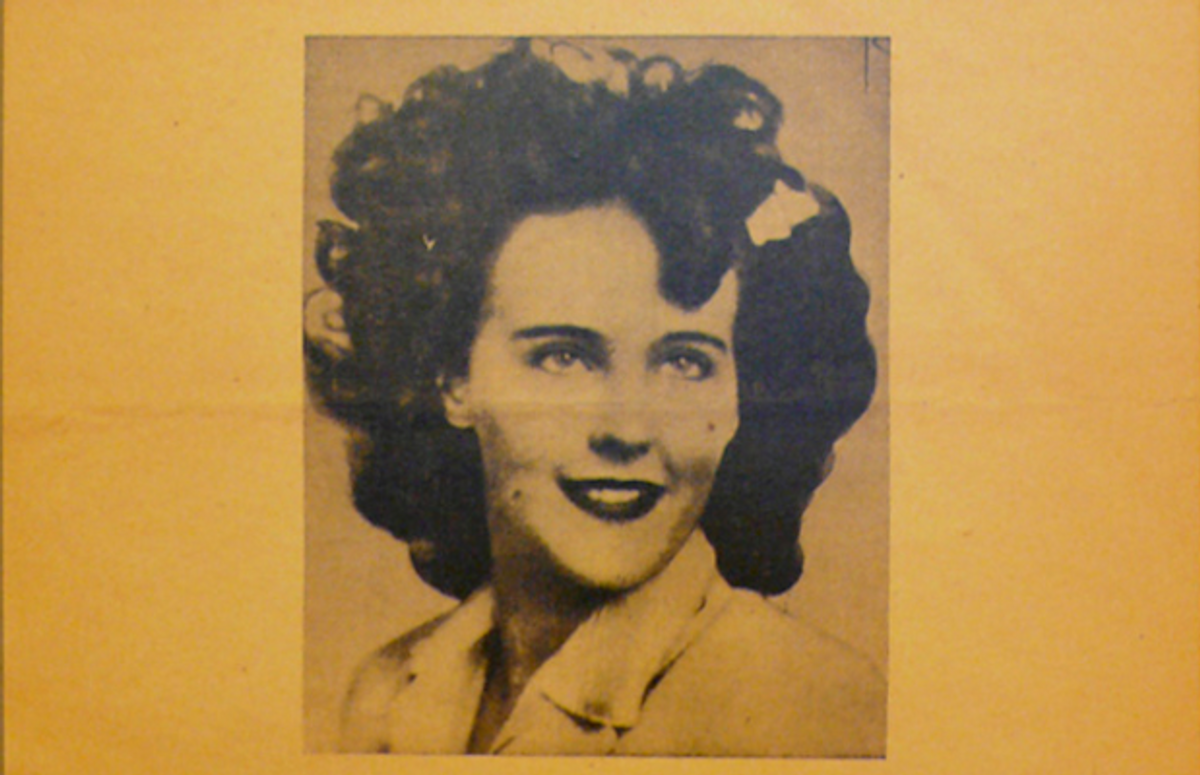 So I’m at the Egyptian Theater in Hollywood to scope this 1933 Stanwyck flick about broads behind bars, but before it starts this dame gets up in front, name Joan Renner. Says her passion is historic crime and vintage cosmetics: sounds to me like a lethal combination. Then she gives the whole audience the inside skinny about the real characters behind the motion picture story, and about femmes fatales in general.

And then the lights go out.

After the movie, I do a little gumshoe work on this Renner. She works out of a site she calls the Vintage Powder Room, devoted to “history, women and art.” She lectures around town regularly, and has even been on the small screen, in a film noir segment for the Turner Classic Movies series “Film Fanatics” and in an episode of the ID Discovery Channel’s “Deadly Women” series.

On weekends she’s a tour guide for Estotouric, and her most popular tour is “The Real Black Dahlia.” It covers the story of Elizabeth Short, who was just another babe who hit Tinsel Town with pipe dreams of stardom until her bisected and mutilated body was found on a vacant lot in Leimert Park in 1947. She was only 22. Her murder caused a media frenzy, and reporters gave her the monicker “Black Dahlia.” The coppers never nailed the perp, and books and films – and bus tours – about Short have kept the story alive over the decades.

Renner also helped put together an exhibit about the investigation that just opened at the Los Angeles Police Museum over in Highland Park. It’s sponsored by crime fiction’s James Ellroy, who penned “The Black Dahlia” in 1987. The top dirt from large piles of police files are displayed in vitrines: never before seen photos, news clippings, police memorabilia, and various other artifacts. The show is up through June 16th.

So I decide to get Renner on the horn for the full lowdown.

Joan Renner: I’m a social historian with an interest in the rich crime history of Los Angeles, circa 1910-1960, so I poke around in libraries and tomb-like government buildings to uncover Los Angeles' criminal past. L.A.'s felons are as flamboyant and unhinged as the city itself.

For example, in the early 1930s there was the case of a woman who, for years, kept her lover concealed in the attic of the home she shared with her clueless husband. When the husband was murdered, the woman and her "Bat Man" lover were front page news for weeks.

One of the most diabolical cases I've ever presented in a lecture was the 1936 slaying of Mary James by her husband Robert. A homicidal husband isn't news, but what made this case interesting was Robert's weapons of choice, two venomous rattlesnakes named Lethal and Lightning. When the snake's poison didn't kill Mary quickly enough to suit him, Robert dragged the poor woman into a bathtub and drowned her. He was the last man to be hanged by the state of California.

And I’m currently researching a book on – what else? – true crime in Los Angeles. I’m also involved in a book project with the Police Museum that will use crime scene photos from the 1930s through the 1950s.

Michael Dooley: What led you to your life of crime history?

I first became interested in crime as a kid in Chicago which, given the city’s reputation, makes sense, right? My parents subscribed to the Chicago Tribune, and I would read the funnies and the crime coverage. When I was eight years old I read about the discovery of the body of a boy, about my age, in a sewer drain. He’d been murdered. That story was scarier to me than any imagined monster hiding under my bed. I followed the story trying to make sense of it, but there’s no way to make sense of child murder. My recollection is that the coverage ended with a report that the boy’s father had died of a broken heart. I imagined a heart literally breaking into pieces, and that made a profound impression on me.

What’s been your role in "Elizabeth," the L.A. Police Museum’s Black Dahlia exhibit?

For over two years I’ve been an archivist at the Police Museum. And I’ve been involved in all aspects of the Black Dahlia exhibit from the moment that the museum was given permission by Chief Charlie Beck to access files in the case.

The museum’s executive director and I pored over transcripts of suspect interviews, eliminated suspect reports, photographs, and crank letters. Out of the mass of material loaned to us by LAPD’s Robbery Homicide Division, we sought to create an exhibit that would not dwell on the horror of the crime, but would focus instead on the investigation undertaken by LAPD.

And what have you uncovered?

There is a mind-boggling amount of misinformation regarding Elizabeth Short’s case. The most common misconception is that she was last seen at the Biltmore Hotel. It’s true that she had been dropped off there by Robert “Red” Manley, the original suspect in the murder. However, once she’d convinced Manley to leave her, she walked a couple of blocks down Olive Street to a bar, The Crown Grille, and it was from that location that she vanished.

I combed the LAPD’s Black Dahlia case files hoping to find anything that would lead me to the identity of the killer, but skilled police detectives have been reviewing those same files for 65 years without success. I didn’t stand a chance.

I’ve also developed a personality profile of Elizabeth Short based upon her choice of make-up, which was unique for her age and her time.

.
In part two of her story, Joan shares intimate details about her period cosmetics collection.

Unless otherwise noted, all photos of the Los Angeles Police Museum's "Elizabeth" exhibit, below, are by Lucy Cook.