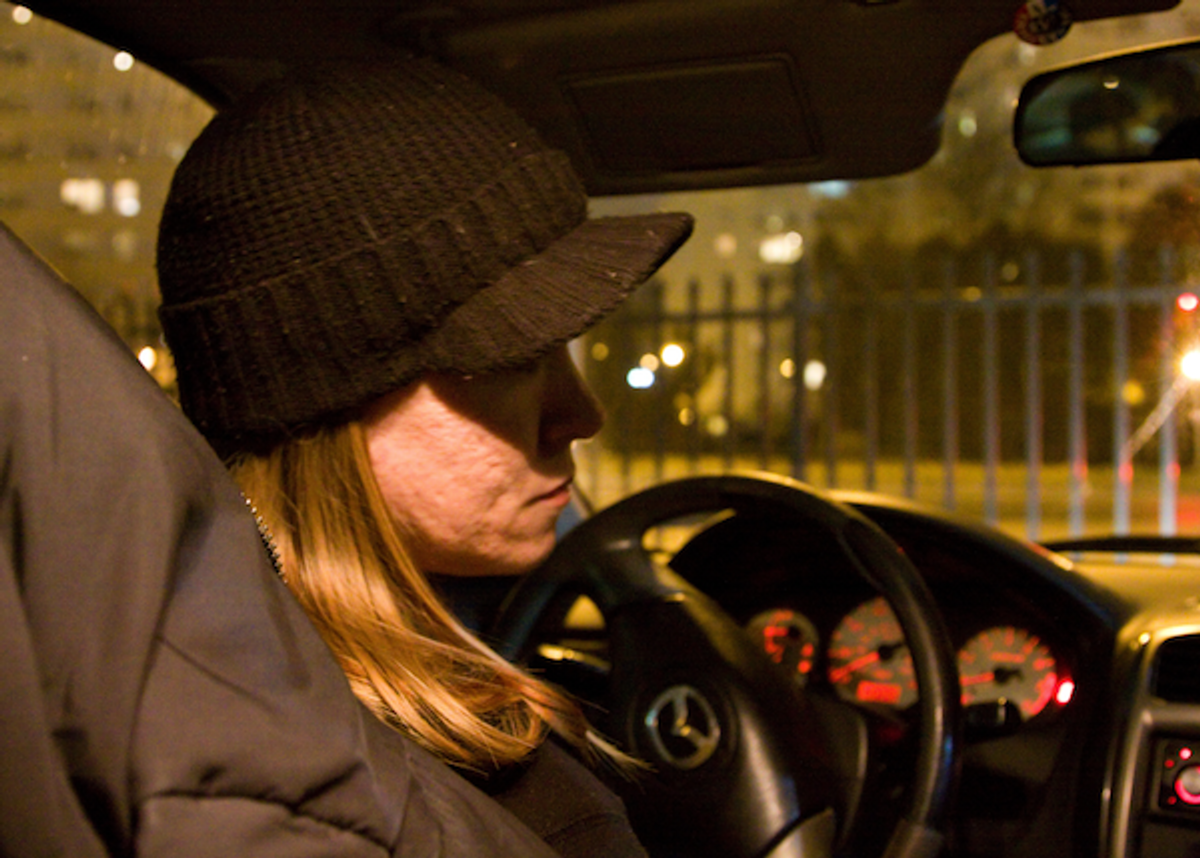 Laura in her car in Philadelphia (Jessica M. Kaufman)
--

It’s a Friday night in West Philadelphia and a 27-year-old nursing student is explaining the finer points of moving black market Oxycontin.

We’re sitting in her car, a late-model sedan, in the parking lot of a TGI Friday’s. It’s raining. There’s a police car nearby, but the officer is presumably more concerned with potential drunk drivers than opiate trafficking.

Oxycodone-based painkillers—Oxycontin, Percocet, Roxicodone—have been popular for years in Philadelphia’s blue-collar suburbs, and Laura is happy to sell them.

But in recent months, demand has shifted. Addicts with pill habits they can’t afford are asking Laura for heroin.

“I’ve heard a lot of people say weed is a gateway drug,” Laura tells me. “It’s really not. The gateway drug to heroin is pills. Period.”

She starts the car.

“The stuff I’m getting is top-notch,” Laura says. “It’s the best I’ve gotten in a long time.”

We pull out of the parking lot and head toward Roosevelt Boulevard, a four-lane highway that runs through the Northeast section of Philadelphia. Her dealer has a room at a shabby roadside motel at edge of the city. If all goes well, there will be a quick exchange in the parking lot.

Laura is afraid go inside a room.

Laura drives fast. Her cell phone erupts with calls and text messages every few minutes. Customers back home are impatient; her dealer is worried she won’t find the motel; you can hear them all shouting at her.

No one seems concerned about police surveillance.

We stop at a convenience store. Laura walks in to use the ATM. She needs $250 to buy three bundles of heroin. It’s a remarkably low price.

A bundle is 14 one-tenth-of-a-gram bags, and Philadelphia has some of the purest retail-level heroin in the country. With a bit of powdered calcium, she can turn those 42 high-purity bags into 84 medium-purity bags, and charge $15 to $20 each.

The markup is accepted because of the alternative. Without a connection, a buyer would have to venture into Philadelphia’s notorious Badlands section and risk being arrested, robbed, or sold counterfeit product.

Laura has a reliable supplier, and she meets him once, sometimes twice, per day.

“I think we’re almost there,” Laura says. We’re back on Roosevelt Boulevard, about 45 minutes into our drive. A red neon MOTEL sign glows on the right. A sign beneath it advertises a HONEYMOON JACUZZI and a MIRRO WATERBED.

We decide the presence of a stranger may disrupt the deal, so Laura drops me off at the diner across street.

She’s back in a few minutes. The deal went as planned: $250 handed to her dealer in the parking lot, a cigarette box containing the bundles tossed into the car. Some worries about the police but not many.

We look at the goods: three tightly wrapped sets of tiny envelopes, each stamped with a green Lacoste logo and a little alligator.

We park behind the diner. Laura places a playing card on her leg and pours out a bag of white powder. She inhales it quickly through a straw. She pours out another bag and inhales it. Then another.

The potential profit on those three bundles is $1,000. But Laura won’t make anything near that. A year ago her drug of choice was Oxycontin; she’s now using two bundles of heroin a day. Her main customer is herself.

“I’m from middle class suburbia,” she says on the ride back. “I never thought I’d be driving down Roosevelt Boulevard, coping dope on Friday night. It hits you in the face sometimes and you’re like, ‘how the fuck did I get here?’”

The number of Americans who use prescription painkillers non-medically is over five million, according to the National Survey on Drug Use and Health. Even a small percentage of them transitioning to heroin would portend a serious public health problem.

Just outside Philadelphia, there’s a perfect storm of factors making it a possibility.

Oxycontin is no longer cheap and easy to find. One 80-milligram pill is $80.

Mexican drug trafficking organizations are adding to the area’s supply of heroin, which has driven down the price. In the counties surrounding the city, there’s a concentration of opiate pill addicts. Heroin is phamacologically similar to oxycodone – users of both describe the same high, how the craving for one can be satisfied by the other.

I ask Laura how she reconciles it all: the driving in and out of the city; the chance of getting caught, assaulted, or overdosing; the possibility of harming other people. She’s a nursing student and has to know there are, at the very least, treatment options for getting heroin out her life altogether.

“Honestly, I just don’t want to go to rehab,” she says. “For that stuff to work, you have to want it. And not to sound arrogant, but I don’t want to get clean.”