"Girls" and "Damsels": To be young and cosseted 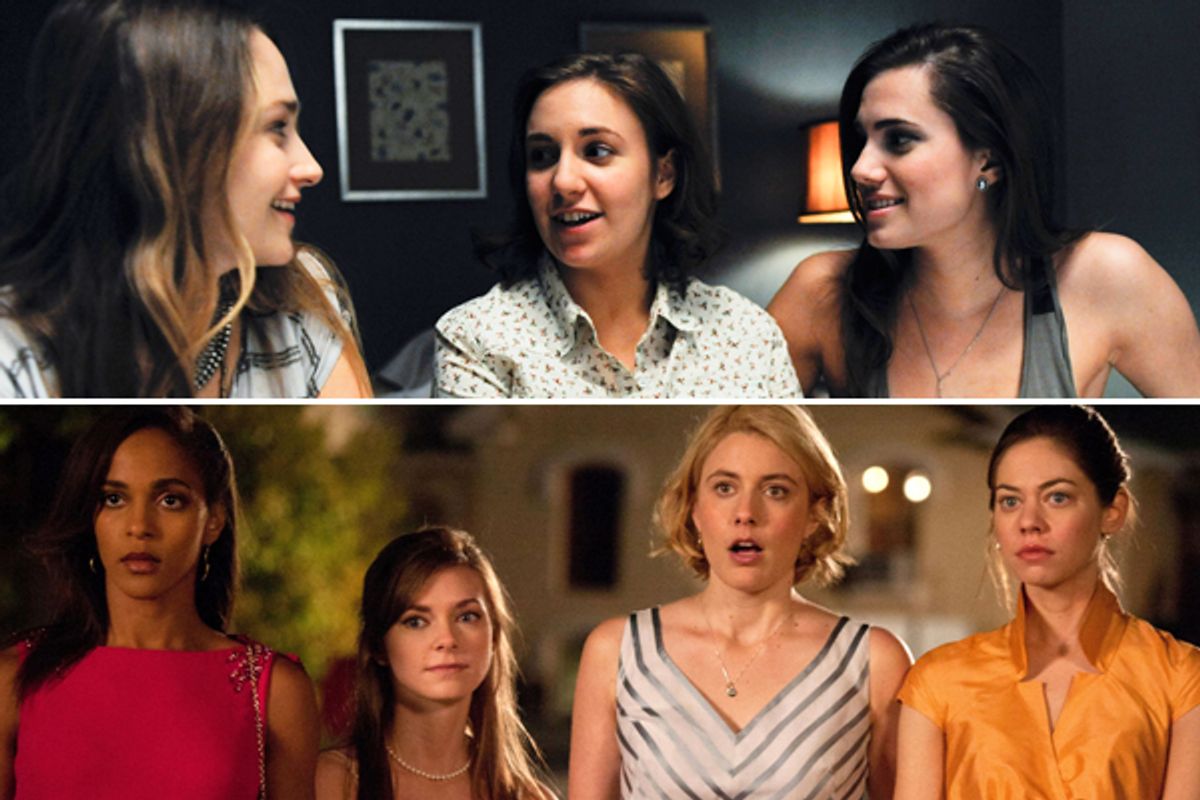 Stills from "Girls" (top) and "Damsels in Distress"
--

There’s a scene in an early episode of Lena Dunham’s "Girls" where Dunham’s character, Hannah, openly fantasizes about testing positive for HIV. That way, she says to a gynecologist examining her, people will congratulate her just for staying alive rather than expect her to accomplish something, and she’ll have a reason to be upset besides just a boy not texting her back. “That’s an incredibly silly thing to say,” the doctor, one of the show’s few brown faces (at least in initial episodes), says gently, citing infection and fatality rates for young women – mostly young women who don’t have much in common with Hannah, though the doctor doesn’t say so.

That’s also around the time the gynecologist says, in a scene clipped for the trailer, “You could not pay me enough to be 24 again,” and Hannah says, “Well, they’re not paying me at all.”

If the teenager was an invention of the second half of the 20th century, more recent decades have brought another period of suspension between childhood and adulthood, the post-college era of confused self-creation. As Dunham herself recently said of the show’s title, “I think that these are girls who will feel like girls until they’re 35 maybe.” For a certain kind of lucky person, freed of the most immediate financial burdens and rich in a family’s emotional investment, college might have felt like independence or responsibility. But it turns out to be so cosseted and circumscribed that graduating feels a little like leaving the womb.

Even so, the ways "Girls" and the new film "Damsels in Distress" treat the problems of young womanhood can tell us a little bit about the realities of class and generational change in America. Since Dunham’s characters aren’t visibly encumbered by one of the most serious matters actually facing her generation – crippling student debt – and they can control their fertility to delay childbearing, they’re both grasping and adrift, left feeling both entitled to more and vaguely guilty about their right to be upset about not getting it. No wonder Hannah, in a moment of weakness, seems to wish for a “real” problem.

The interim solution, it seems, is to talk through it as articulately and self-deprecatingly as possible, and the long-term solution is to wait it out. The former tactic has always been preferred for characters in Whit Stillman movies, who try to cope with the emotions of early adulthood by offering as much cerebral distance as they can muster. Stillman’s first film in over a decade, “Damsels in Distress,” offers yet another self-possessed hero pronouncing to an outsider how to rationalize and handle one’s feelings in a world of elaborate social customs – in this case, college. As in earlier Stillman movies, there are more dewy, lovely girls, often surrounded by inadequate and self-obsessed men. In Dunham’s work, the two meet to have mostly unsatisfying sex, but Stillman’s more genteel, ahistorical types favor dance crazes.

Sex for the characters on “Girls” is plainly influenced by porn, but the characters’ congress as we see it is deliberately the anti-porn: at best, demystified, often disappointing, intermittently funny, and never quite leaving the realm of self-consciousness. This is how group socializing – parties in particular -- functions in Stillman movies. It’s never quite as fun as it’s supposed to be, and the best lines come on the sidelines. But people still valiantly try to lose themselves in dance, a more raw form of interaction even as it has its own rules. It is almost always a nostalgic exercise – his first three movies, “Metropolitan,” “Barcelona” and “The Last Days of Disco,” each take place at the lingering close of an era, and the “Damsels'" device-free world is steeped in tap and line-dancing. Moving your body unself-consciously is a goal in itself -- in “Damsels in Distress,” the highest ambition of Violet (Greta Gerwig) is to start a new dance craze, the Sambola. It’s one of the funniest jokes of the movie that this is actually just a pastiche of several existing dances, remixed.

What does it mean to be ambitious when so much has been made easy and so much came before you? When your parents seem to have done all the heavy lifting and the significant cultural work? Sometimes, it means lowering your sights so low you can’t fail – per Hannah, just staying alive is an accomplishment. In the beginning of “Barcelona,” one character vows to only date women who aren’t beautiful, and now in “Damsels,” Violet proclaims that one should only date “morons,” ostensibly because one has an opportunity to improve the world that way. Of course, it’s also a way to preempt rejection when there is very little concretely at stake.

Preempting rejection is something Dunham knows well: She’s often admitted to doing it by putting forward her un-Hollywood body as mortifyingly as possible. The same goes for what she called in the same interview with critic Alan Sepinwall “self-exposure and the age of the over share.” It functions, she said, as “another kind of self-defense in a certain way. It’s like, I'm going to tell you everything about me so you can’t tell me anything about me that I don’t already know.” That includes the semi-shamefaced revelation that one wants to be famous or important: While Dunham’s characters crave sexual validation, career validation is at least as meaningful. In a moment of honesty, Dunham’s Aura in her movie “Tiny Furniture” admits that she wants to be as successful as her mother. In “Girls,” Hannah is more open about her desire to be something – “a voice, of a generation,” as she eventually amends.

Dunham picked Stillman’s “The Last Days of Disco” for her recent week of programming at the Brooklyn Academy of Music, and she cast Stillman mainstay Chris Eigeman as the boss at her internship in “Girls.” In that movie, two recent college graduates who like each other less than Dunham’s girlfriends toil in publishing and cycle through sexual and romantic partners. As they embark on an apartment hunt, a male colleague sneers, “That’s comical, that girls like you really worry about paying the rent. Aren’t your fathers heavily subsidizing your living expenses with big allowances?” The character played by Kate Beckinsale replies indignantly, “They’re not big at all.”

There are other, more acute humiliations, but in the arc of the movie, they pass. Chloe Sevigny’s Alice gets slut-shamed by the first man she has sex with, and dates yet another arrogant jerk, until she doesn’t. By the end, disco is dead, but Alice has moved on, having gone with her instinct and landed a career coup. She finds a better guy, at least for now, to bust a move with on the subway. Meanwhile, in “Girls,” Hannah momentarily frees herself from anxiety in a dance – first solo in her bedroom, then with her roommate. Forged in the absence of responsibility for a nuclear family, friendships of particular vitality and import are a signal achievement of this stage of life – and a way to survive it.

In the end, for the women and men of Stillman and Dunham’s world, these elite woes are emotionally destabilizing but ultimately transient. That’s partly why the pity and dismay that’s been bestowed upon Dunham’s characters by some of her elders seems so misplaced. Even as she takes her characters – and her peers’ – pain seriously, she’s affectionately skewering them for our benefit, partly because she knows they’ll come out of it mostly fine. As the New Yorker’s Emily Nussbaum has pointed out on Twitter, in "Tiny Furniture," Dunham’s character, Aura, finds her mother’s diary from her early 20s “and finds out that things weren't different for her. Same struggles with sex, body and artistic ambition, same unformed identity. But now, that mother “RARELY thinks about those experiences. They're valuable, they shaped her, but [they’re] just history now.”

These are bumps along the learning curve that have long been part of the male coming-of-age narrative – “sowing wild oats” and so on – that still prompt a sort of paternalistic panic when practiced by “girls.” Sure, not everyone will emerge as quickly and as brilliantly as Dunham, but for those temporarily freed from the most pressing burdens of life, left only to figure out what the hell they actually want from theirs, it’s a light at the end of the tunnel.