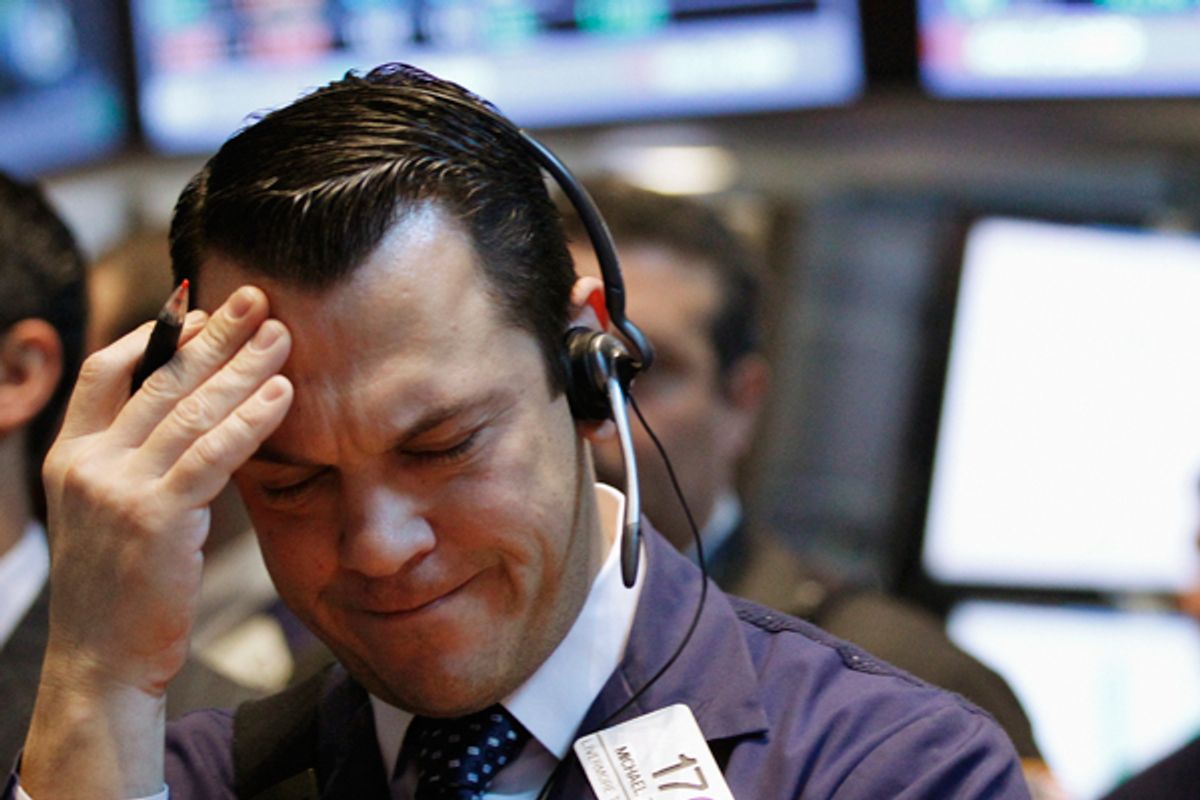 A trader on the floor of the New York Stock Exchange. (Reuters/Brendan McDermid)
--

Is the problem with capitalism that there are too few capitalists? Is the solution to encourage every American to get into the stock market? Before the tech bubble burst at the beginning of this century, I thought this was an interesting notion that deserved careful consideration. Mea culpa. Today, after two disastrous stock market crashes in less than a decade, I think that the idea of “the investor society” or “the ownership society” or “universal capitalism” (defined narrowly as encouraging wider individual ownership of stocks and bonds, as opposed to broadly, to include proposals for sharing profits from public resources or sovereign wealth funds) is a profoundly misguided idea. The proponents of universal shareholding in the 1990s were right that more Americans should share in the gains from economic growth, which have gone disproportionately to the owners of capital and overpaid CEOs. But the method of spreading the gains by encouraging individual working Americans to risk their money in the stock market was ill-conceived.

During periods of rapid asset inflation, whether the assets be stocks and bonds or houses, it is tempting to conclude that the middle class and poor, as well as the rich, should be able to enjoy the benefits of asset appreciation. In such an era, like the 1990s, the warnings of realists are drowned out by the claims of optimists that the rise in stock market or house values is a permanent trend, not an unsustainable bubble. The failure to recognize the stock market bubble for what it was encouraged schemes to increase the ownership of stocks and bonds by America’s high-school educated, working-class majority. The utopian dream was that, in addition to earning income by means of wages, every American could be a capitalist, supplementing wage income with income from capital gains. The fact that, during the bubble, stock market returns outpaced the virtual returns from “investment” in Social Security created converts for the libertarian scheme of partly or wholly replacing Social Security with tax-favored individual retirement accounts invested in the stock market.

That this was madness was argued by a lonely few at the time.  By now its lunacy should be apparent to everyone but die-hard libertarians and stock market touts in the financial press. Appealing as it seems, “universal capitalism” — the idea that middle- and low-income Americans can or should rely for a substantial part of their incomes on investments in the stock market — is bad for ordinary Americans and the American and world economies as a whole.

Proponents of universal individual stock ownership often view it as a supplement or replacement for public income maintenance programs, of which the most important are Social Security and unemployment insurance. Likely Republican presidential nominee Mitt Romney recently praised the libertarian idea of private unemployment insurance accounts. Diverting Social Security payroll taxes into the stock market is another right-wing idea which, like Count Dracula, repeatedly rises from the dead.

But public income maintenance programs are far less volatile than stocks and bonds, particularly at the federal level. The federal government has a diverse, continental tax base. And it can borrow more easily than the states to meet its obligations during downturns like the Great Recession. Average Americans can count on Social Security and the federal contribution to unemployment insurance far more than they can expect the stock market to be up at the exact moment when they are fired or have to retire.

In addition to being a bad deal for ordinary people, the push to increase stock market participation by the majority of Americans has had bad effects on the economy as a whole. At the root of the volatility of the global economy in the decades leading up to the crash of 2008 was an excess of global savings and too little wage-enabled consumption by ordinary people in developed and developing nations alike. This problem had many causes, including the strategy of Asian mercantilist countries of suppressing the incomes of their workers and the diversion of the gains from economic growth in the U.S. into rewards for shareholders and CEOs rather than higher wages for workers.

One factor in macroeconomic instability was federal tax policies that encouraged employer-based pension funds, in the 1940s and 1950s, and then Roth IRAs and 401K’s, beginning in the 1970s. These tax incentives channeled enormous amounts of money from working Americans into mutual funds. This money—at least what was left, after the brokers had extracted their hidden fees — added to the oceans of money sloshing around in search of unrealistically high returns, producing a pattern of ever more severe booms and busts.

Among other harmful effects, Wall Street management of the retirement money of millions of Americans, whether in the form of employer or union or public pension funds or IRAs and 401K’s, contributed to the culture of short-termism in the American business community. Answerable to flighty investors demanding high short-term returns, CEOs neglected the long-term health of one American company after another, in order to goose quarterly earnings reports by dismantling and offshoring industrial capacity, slashing wages and benefits, or engaging in financial machinations (some of them criminal, as in the case of Enron).

Last but not least, the fantasy of the investor society has had a corrosive effect on the ethics of Americans. The unspoken premise is that it is not enough to work hard in order to get ahead. Average Americans as well as the rich few must gamble in the stock market as well. To their detriment, millions of Americans whose wages failed to keep up with economic growth bought into this Wall Street-peddled fantasy of a nation of day traders and house flippers. They and the rest of us are still paying the price for the corruption of American morals by the get-rich-quick mentality.

It is time to wake up from the daydream of the investor society and face reality. The bubbles were just bubbles. No serious economic expert expects the next few decades to be a golden age of rapid growth capable of enriching janitors with stock market accounts as well as tycoons.

The United States is not a nation of capitalists. It is a nation of wage earners with a minority of capitalists. The only genuine capitalists — individuals who can live entirely from their investments — are a minuscule minority in the U.S. and all other so-called capitalist countries. Having a modest amount of retirement money in a mutual fund does not make anyone a capitalist except in the Wall Street Journal’s Op-Ed pages. For the foreseeable future, few Americans will derive any significant income from capital gains during their working lives, just as few will derive more than a small portion of their retirement income from sources other than Social Security including 401K’s. Right-wing propaganda about an emerging “capitalist majority” to the contrary, America is and will remain a nation of wage earners dependent on pay-checks and public social insurance like Social Security and unemployment insurance.

In the name of dealing with the federal budget, there is a well-funded push in Washington for cutting Social Security and forcing Americans to rely more for retirement on 401K’s and other tax-favored accounts. This conventional wisdom manages to be stupid and crazy at the same time. Given the dangerous volatility of the stock market, the truly prudent course would be to expand risk-free Social Security payments to most Americans, while reducing or phasing out tax breaks for volatile, risky stock market accounts funded by employer pensions or private savings accounts.

Businesslike prudence counsels an effort to shrink the failed, volatile private retirement savings programs and expand the more secure public retirement system. The  expansion of the low-risk Social Security program, proposed by Steven Hill among others, can be paid for with higher payroll taxes or a mix of payroll taxes and general revenues, including increases in income tax revenues that follow the capping or eliminating of IRAs, 401K’s and similar poorly performing, tax-favored private retirement programs.

Just as private investments are a poor substitute for Social Security, so the promise of capital gains is a poor substitute for wage increases.  Low- and middle-income Americans need higher wages or greater, secure public benefits, or both, not the promise that they can supplement their low wages or inadequate benefits with day trading — a promise that in hindsight looks like a sick joke.

Libertarian ideologues will continue to lobby in favor of replacing public social insurance with private accounts in the stock market; that is what they are paid to do, by the Koch brothers and their other donors. And self-styled “budget hawks” — most of whom are ideological conservatives posing as pragmatic centrists -- will continue to claim falsely that the U.S. cannot afford Social Security in its present form, much less in an expanded form that would increase American retirement security while reducing macroeconomic volatility.  Finally, fund managers on Wall Street will continue to salivate at the prospect of replacing part or all of Social Security payroll taxes with voluntary or compulsory “individual mandates” pressuring Americans to buy the risky products they peddle and to pay the Wall Street middlemen their fees.

Do not be fooled by this well-funded propaganda.  Americans need higher wages and more generous, secure public benefits, not schemes to encourage them to compensate for lousy pay and inadequate benefits by gambling in the risky stock market.  Some ideas really do fail the test of history. After two catastrophic stock market crashes in less than 10 years, the once-fashionable idea of the investor society gets a failing grade.