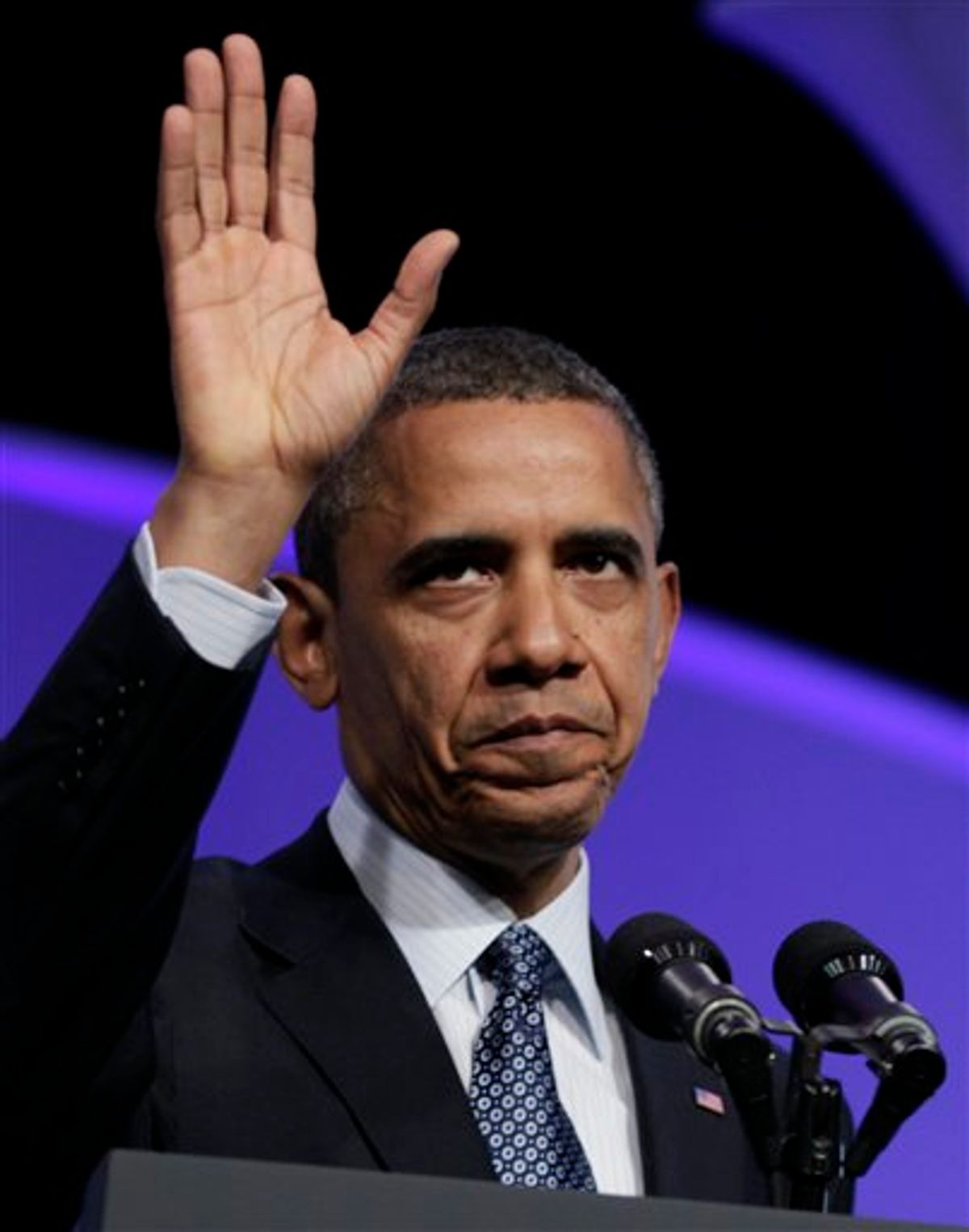 At some point in the future, Barack Obama, perhaps the only national politician who supported gay marriage in the 1990s and opposes it today, will officially complete his "evolution" on the subject and endorse full equality. The assumption has been that this will occur sometime after the November election, when he'll either be a second-term president or an ex-president, freed either way from ever having to worry about running for office again.

There's a growing possibility, though, that Obama will be forced to make a tough call at the height of this year's campaign, thanks to pressure within his own party. Last week, four former Democratic national chairmen publicly called for the party's 2012 platform to endorse marriage equality, echoing previous statements from Nancy Pelosi and Los Angeles Mayor Antonio Villaraigosa, who will serve as the permanent chairman of the party's Charlotte convention this summer. Mike Memoli reported today on the platform maneuvering and noted that it

puts Obama in an awkward spot. He's asking gay rights supporters for votes and money — he is scheduled to headline a fundraiser with gay supporters Tuesday in Florida — without committing himself on an issue of paramount concern.

According to Memoli, a platform committee will be assembled in mid-June, but a platform drafting committee could be in place before then. Since the White House effectively controls the DNC, the question is whether Obama's team will work behind the scenes to keep a pro-gay marriage plank out of the platform, perhaps with some kind of compromise language. Theoretically, Obama could let the party adopt a marriage plank while remaining officially noncommittal ("I respect where my fellow Democrats are on this issue, but I'm just not there yet myself..."), but whether that would be practical is another question. Or maybe, as unlikely as it seems, he'll conclude that there are more points to be scored by boldly endorsing gay marriage than by sticking with the "I'm evolving" mushiness; Greg Sargent recently reported that Obama's team is at least thinking about this possibility.

What this really illustrates is that Obama, who as a state Senate candidate in a very liberal district in 1996 was on the cutting edge of progressive opinion when he endorsed gay marriage, has fallen behind where most of his party is on this issue. His reluctance to publicly come around is understandable; it's still unclear how swing voters in states like Ohio would respond to a pro-gay marriage presidential candidate, and every time the issue has been placed on a statewide ballot, the anti- side has prevailed. But even voters in those states are changing their minds quickly, and the pace is even faster within the Democratic Party.

Viewed from this angle, Obama's decision doesn't feel quite as important. Sure, it would be a major development if he and his party were to officially endorse gay marriage this year. But look ahead to 2016, when the Democratic nomination will be open. It's striking how many of the prospective candidates -- Andrew Cuomo, Martin O'Malley, Deval Patrick, Sherrod Brown, Dan Malloy, Elizabeth Warren -- are on-board with marriage equality. Their position is rapidly becoming the position that all aspiring national Democrats will be expected to take, and it's virtually inconceivable that the '16 platform won't reflect this. And even if he punts this year, as still seems likely, it's just as inconceivable that Obama's evolution won't also be complete by then.