The liberal betrayal of Bradley Manning

Guest Post: Why have liberals not rallied to the WikiLeaks source's defense? 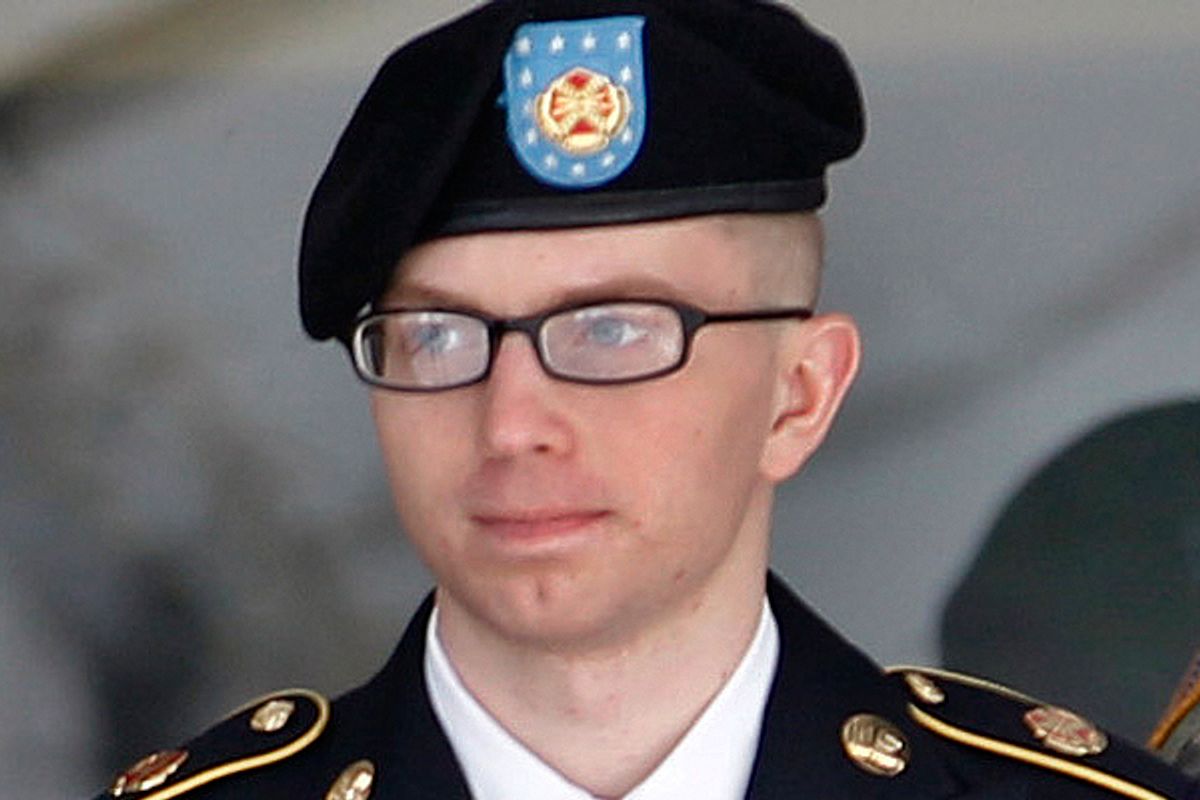 More than three years into the presidency of Barack Obama, it's almost a cliché now to ask: What if George W. Bush did it? From dramatically escalating the war in Afghanistan to institutionalizing the practice of indefinite imprisonment, Obama has dashed hopes he would offer a change from the Bush's national security policies – but he hasn't faced a whole lot of resistance from liberals who once decried those policies as an affront to American values.

Like those on the right who now crow about fascism but spent the Bush years gleefully declaring left-wing celebrities “enemies of the state,” many of those on the liberal-left treat issues of war and civil liberties as useful merely for partisan purposes. When a Democrat's in power those issues become inconvenient. And usually ignored.

Former dean of the Yale Law School Harold Koh, for instance, used to rail against the imperial presidency, speaking of the horror of torture and “indefinite detention without trial.” Now a legal adviser for the Obama State Department, he recently declared that “justice” can be delivered with or with out a trial. Indeed, “Drones also deliver.” Don't expect much more than a yawn from Democratic pundits, though, much less any calls for impeachment. It's an election year, after all. And what, would you rather Mitt Romney be the guy drone-striking Pakistani tribesmen?

“Obama and the Democrats being in power in Washington defangs a lot of liberal criticism,” Chase Madar, a civil rights attorney in New York, told me in an interview. Indeed, but with a few exceptions – Michael Moore, Dennis Kucinich, The Nation – those who would be inclined to defend Manning were Bush still in office are the ones either condemning him or condoning his treatment, which has included spending the better part of a year in torturous solitary confinement, an all too common feature of American prisons. Even his progressive defenders, remaining loyal to the Democratic Party, tend to downplay Obama's role in the Bradley Manning affair; his authorizing the abuse of an American hero is certainly no means not to vote for him again.

“The whole civil libertarian message only really seems to catch fire among liberals when there's a Republican in the White House,” says Madar. When there's not a bumbling Texan to inveigh against, all the sudden issues that were morally black and white become complex, and liberal media starts finding nuance where there wasn't any before.

That much is clear in the case of Manning, the young soldier accused of leaking State Department cables and evidence of war atrocities to WikiLeaks. Under different conditions, he might be a liberal hero. After all, much – though certainly not all – of what he exposed, from the killing of Iraqi civilians to US complicity in torture by the Iraqi government, happened during the Bush years. But it is the Obama administration that is imprisoning him. It is Barack Obama who pronounced him guilty before he so much as had a trial (which he's still waiting for after almost two years in captivity). And so justifications must be made.

One popular way is by attacking Manning's character, by arguing that unlike Daniel Ellsberg, who leaked top secret Pentagon documents detailing U.S. failures in Vietnam, Manning – who, if the charges against him are true, didn't leak a single piece of top secret information – was simply a troubled young man. The New York Times, for instance, published a piece that spent several thousand words to essentially say he did it because he had “delusions of grandeur.” And because he was gay, probably.

Alyssa Rosenberg, a blogger for the Center for American Progress, declared her “main opinion of Bradley Manning” to be that “it sounds like he has pretty serious emotional problems and turned out not to be a particularly effective whistleblower.” Conveniently, Manning is to blame for the fact the WikiLeaks revelations did not alter the behavior of the American empire, not the institutions of state power so often fawned over by Rosenberg and her colleagues as fundamentally good and just.

Joy Reid, a Democratic pundit who often appears on MSNBC, likewise dwells on Manning's alleged emotional problems and gayness. Because he allegedly divulged to a hacker-turned-informant that he was struggling with his gender identity, Reid – ignoring all the inconvenient comments about being outraged by torture and civilian deaths – argued that Manning was no hero at all, but rather “a guy seeking anarchy as a salve for his own personal, psychological torment” caused by his sexuality. In this case one might well ask: What if Rick Santorum said it?

When the Nixon administration sought to discredit Ellsberg back in 1971, it played by the same book as Reid and other Obama loyalists unwilling to believe their president is persecuting a hero, breaking into his psychiatrist's office in a vain attempt to uncover evidence of mental illness. Today, the liberal media does the government's work for it.

A lot of that, obviously, has to do with partisanship. Though Ellsberg's leaks primarily exposed the lies of Nixon's Democratic predecessor's, he was the target of a loathed Republican administration, so liberals rallied to his defense; there was a president to take down, after all. By contrast, the treatment of Manning – labeled “appropriate” by Obama; as “cruel” and “inhuman” by the UN special rapporteur on torture – threatens the mainstream liberal narrative about the American state. If a Democratic president is torturing a whistle-blower who primarily exposed atrocities authorized by his Republican predecessor, it's almost as if . . . well, best not to think about that.

But it's just brand loyalty that explains the liberal condemnations of Manning – or the even more common silence. As Madar, who just wrote a book on the alleged WikiLeaks source, "The Passion of Bradley Manning," notes, when it comes to Manning and the broader issue of Obama's continuation of Bush's war on terror, it's about more than simple party politics.

“There's a long tradition of liberals, especially in the first few decades after the Cold War, of being opposed to, say, the vulgar witch-hunting, hysterical anti-communism of Joseph McCarthy,” says Madar, “but being supportive of the much more professional anti-communism of, say, Harvard University.” You can see the same dynamic at play now. Bush's imperialism was crude and unilateral, so it was condemned; Obama's is more sophisticated and multilateral, so it's condoned – or cheered.

Similarly, those on the right who condemn Manning do so in a manner repellent to the more refined liberal palette. Former Arkansas governor Mike Huckabee, for instance – in the midst of selling his children's book, Can't Wait Till Christmas! – declared that for Manning, “anything less than execution is too kind a penalty.”

How uncouth. How vulgar. On the center-left, the position is much more sensible: don't outright murder the guy, at least not without a show trial, but don't you dare let him see the light of day again. As Obama himself pronounced, “He broke the law,” which is something that must be obeyed by everyone but bankers and torturers and presidents. We can't just expose the state-sanctioned torture and murder of innocents willy-nilly. We can't just listen to our own consciences when confronted with institutional evil. That'd be anarchy. Which is bad.

To be fair, liberals can't really be blamed for their reaction to Manning. What he did was fundamentally radical, not reformist. He didn't settle for working within a system explicitly designed to thwart the exposure of wrongdoing, through a chain of command that callously ignores concern for non-American life. Having access to evidence of grotesque crimes no one around him seemed to care about, he engaged in direct action, exposing them for the benefit of the world and those paying for them, the U.S. taxpayer.

“[I]f you had free reign over classified networks for long periods of time,” Manning reportedly wrote to the man who ultimately turned him in, “and you saw incredible things, awful things... things that belonged in the public domain, and not on some server stored in a dark room in Washington DC... what would you do? ” We know what his answer was. And we know what the guardians of establishment liberalism would have had him do: Nothing.

Judge for yourself which is more defensible.