George Zimmerman's camera-loving attorneys say they can't reach him, but he's talking to the Fox host 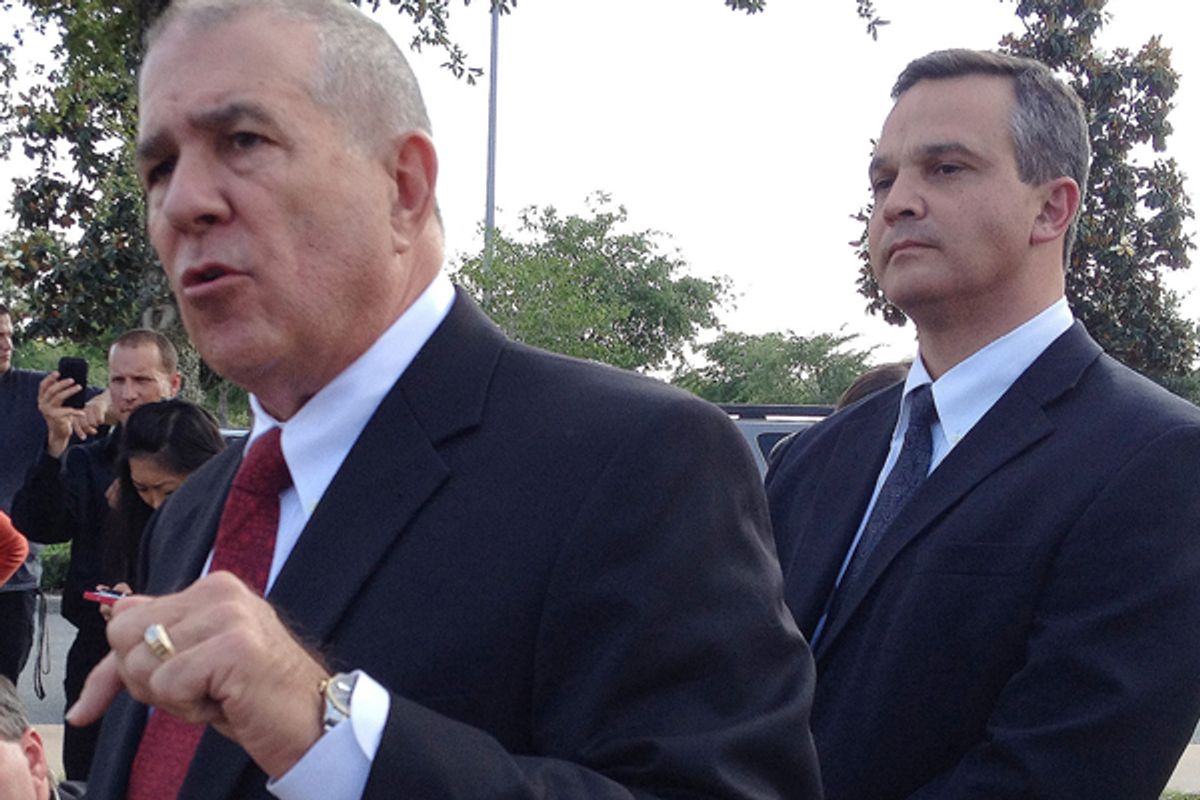 George Zimmerman's attorneys Craig Sonner and Hal Uhrig shook up the Trayvon Martin case Tuesday afternoon by announcing they had lost contact with their infamous client and were no longer representing him in connection with his shooting the unarmed 17-year-old Feb. 26. With the news that Zimmerman traded talking to his attorneys with talking to Fox's Sean Hannity, this story went full-tilt culture war crazy.

In addition to revealing that Zimmerman has spoken with Hannity – the Fox host refuses to divulge what they discussed – the pair said they were "concerned for his emotional and physical safety" and suggested he might be suffering post-traumatic stress disorder from watching too much television coverage of the case. They wouldn't disclose Zimmerman's whereabouts, with Uhrig saying, "you can stop looking in Florida, look much further away than that," but "he's in the United States."

The two attorneys made a strange case even stranger. The official basis for their withdrawing from the case seemed to be the news that Zimmerman had contacted special prosecutor Angela Corey and offered to come in, and told her he wasn't represented by counsel, calling Sonner and Uhrig "special advisors." (Corey said she couldn't speak to him without counsel.) But their move came the same day Zimmerman revealed a bizarre, flag-bedecked website raising money for his defense that looks like it was designed by the folks at Fox Nation, which the lawyers said they hadn't been told about.

So an armed man who shot an unarmed teenager and who may be emotionally unstable has stopped talking to his attorneys, but will communicate with a conservative talk show host? Could this case get any weirder?

His attorneys' nutty press conference doesn't make Zimmerman any more guilty. In fact, you don't have to believe Zimmerman's side of the story to find his lawyers' public withdrawal from the case ethically shady. They could have disclosed the situation to the prosecutor, or even released a statement. They didn't have to hold a rambling, self-aggrandizing carnival of a press conference in which they made their ex-client sound unhinged.

But I'm glad they did. The Hannity story may be their oddest disclosure -- particularly their claim that Zimmerman told the Fox host details he didn't tell them. It's not entirely surprising: Hannity has been a reliable spokesman for the shooter's claim of self-defense and boasted an "exclusive" interview with father Robert Zimmerman last week. But it ratchets up the culture-war aspect of the story.

Zimmerman is apparently seeking comfort and protection not in the legal system, but in the inner chambers of the right-wing resentment machine known as Fox News. Also Tuesday, Rush Limbaugh declared that "the Trayvon Martin situation caused happiness somewhere in the civil rights community." The only people happy about this tragedy are right-wingers pushing it to advance their narrative of black criminals menacing innocent whites (or white Latinos, in the case of Zimmerman).

This case just keeps getting uglier. Nothing that happened Tuesday means Zimmerman is guilty of a crime in the Martin case, but it makes the Sanford Police Department's decision to release him, armed, without drug testing or psychiatric observation, seem even more irresponsible.