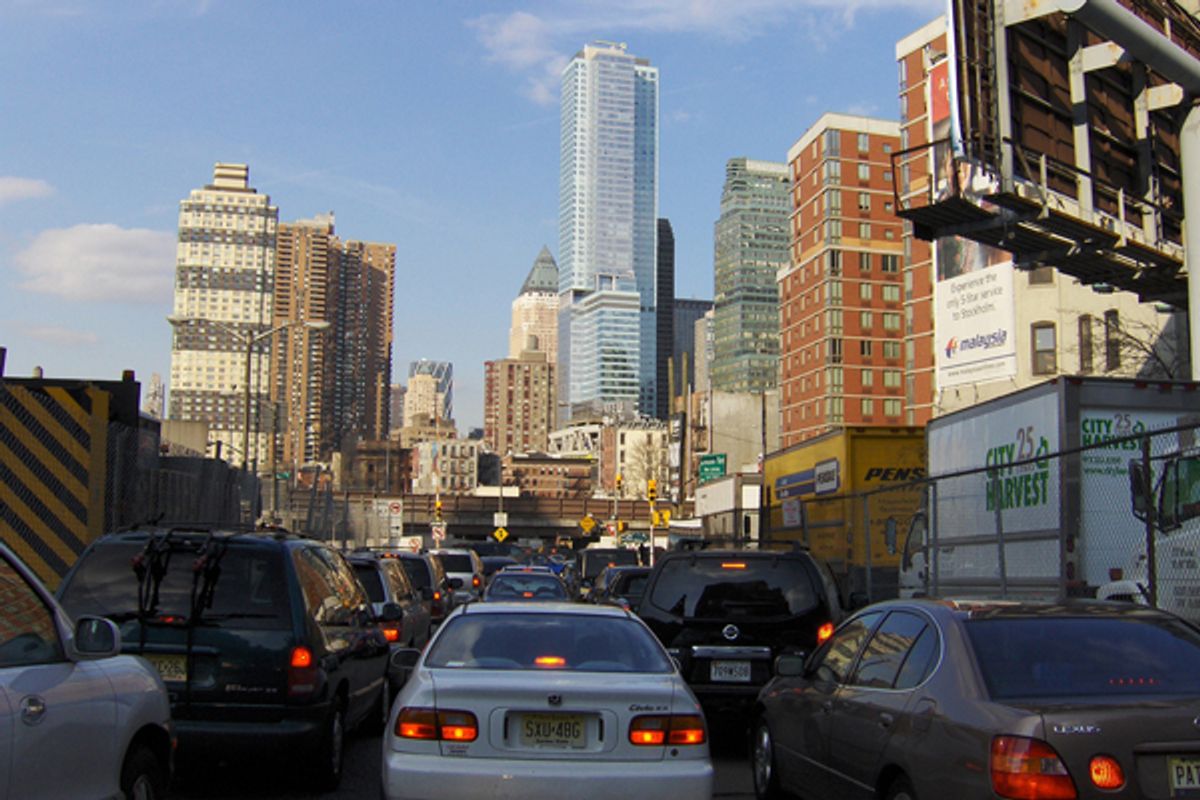 Here's a wild statistic: At any given moment, a third of the cars in Manhattan are just passing through on their way to somewhere else. Why? Because it's cheaper than driving around it.

Thanks to a quirk of history, the East River bridges to Manhattan aren't tolled, nor are the outbound Hudson tunnels -- you can drive from Long Island to New Jersey for free if you go through Manhattan. Go around Manhattan, however, and you'll hit tolls of up to $13. The system gives drivers a financial incentive to drive straight through the most crowded, most congested patch of land in the country.

With gas taxes, we make the same mistake: We artificially depress the price of fuel so that the least efficient way to get somewhere -- in this case, a private car -- is also sometimes the cheapest.

New Jersey Gov. Chris Christie has given us an opportunity to discuss this absurdity. On Tuesday, the New York Times revealed the true reason he killed plans for a new rail tunnel from New York to New Jersey. Yes, he was genuflecting before Tea Party deficit hawks, but, said the paper, the decision was actually "more about avoiding the need to raise the state’s gasoline tax."

Washington gets some flak (not nearly enough) for not raising the federal gas tax. The last time it budged, a T-Rex was chasing Jeff Goldblum, and Meat Loaf was in the Top 40. But individual states are just as guilty of keeping their gas taxes frozen, which, because of inflation, effectively adds up to more deeply discounted gas every year. Fourteen states haven't raised their gas taxes in at least two decades, including New Jersey, which now has the nation's third-lowest rate -- it hasn't gone up since 1988. This has caused the state's real-dollar gas-tax revenue to fall by 40 percent. By not keeping the tax apace with transportation costs, New Jersey loses half a billion dollars a year.

When we talk about the federal gas tax being too low, we talk about the fact that keeping the price of gas down encourages sprawl and discourages sales of fuel-efficient cars -- both worthy concerns. But by ignoring the problem of states refusing to raise their rates as well, we miss out on the fact that, for instance, New Jersey's Transportation Trust Fund is now $12.5 billion in debt. Wyoming last year voted down an attempt to raise its gas tax, the country's second-lowest, which would have allowed it to repair underground storage tanks that are leaking petroleum into the earth. And South Carolina, which borrowed $52 million from Washington last year to close a budget gap created by its super-low gas tax, recently moved to cut that tax by 10 percent more.

And why not? Gas is expensive now, right? The truth is, the price of gas is unnaturally low, held down by governors who would sooner take a handout from Washington than increase the price by a penny per gallon. This thinking is creating a fiscal disaster for state governments. And it's put New Jersey on track to earn a dubious distinction: By mid-century, it will become the first state in America to literally run out of land. By making "drive till you qualify" so cheap, all the Garden State's unprotected open space will be completely gone in a few short decades.

Maybe it's best if we just drive around it.