Guest Post: The bailed-out bank has used its taxpayer money to invest in private prisons 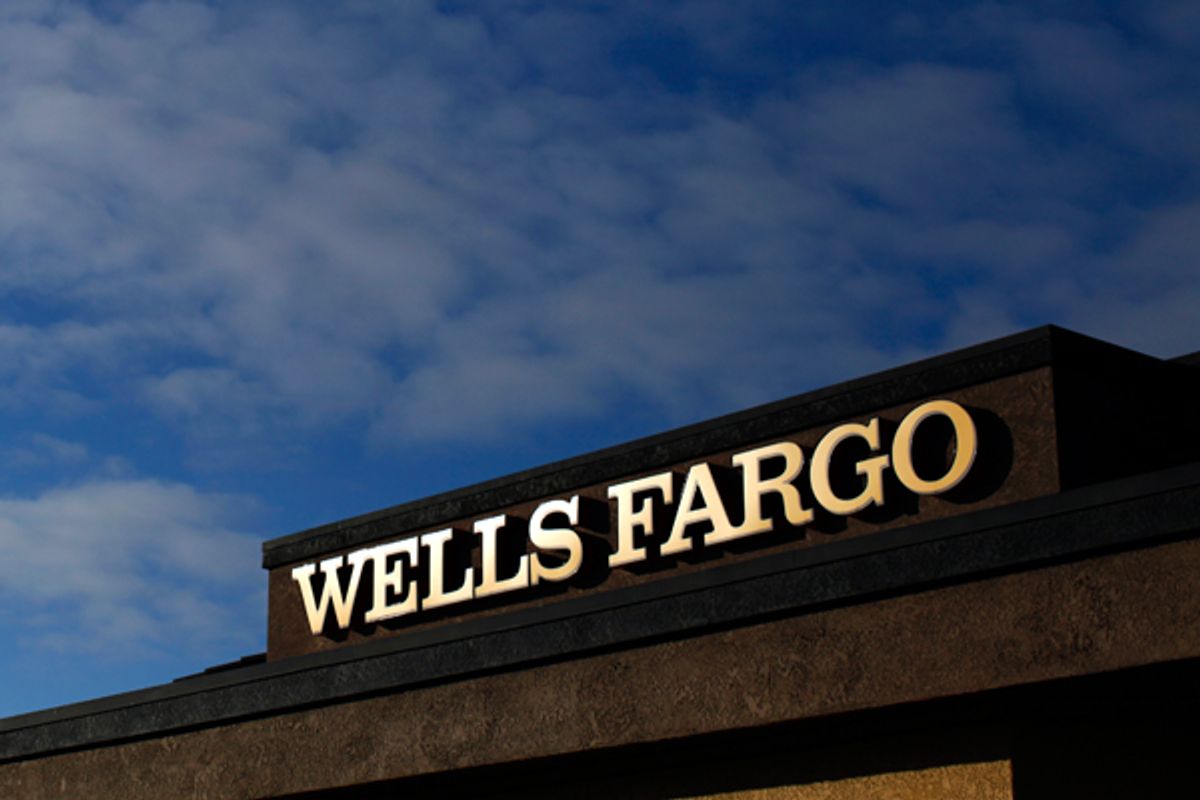 Wells Fargo is one of the top five largest banks in America, a fact that on its own is damning enough, basic human decency not exactly being conducive to success in the financial industry. Despite, or rather because of, its role as one of the leading sub-prime mortgage lenders prior to the 2008 crash in the housing market, the bank was handed $37 billion from the U.S. government, a transfer of wealth from the foreclosed upon have-nots to the haves doing the foreclosing – people like chairman and CEO John Stumpf, whose compensation actually rose after his company's de facto bankruptcy to a cool $18 million last year.

As Wells Fargo has grown over the years, using its bailout funds to gobble up rival Wachovia and expand to the East Coast, so has the U.S. prison population. By 2008, one in 100 American adults were either in jail or in prison – and one in nine black men between the ages of 20 and 34, many simply for non-violent offenses, justice not so much blind as bigoted. Overall, more than 2.3 million people are currently behind bars, up 50 percent in the last 15 years, the land of the free now accounting for a full quarter of the world's prisoners.

These developments are not unrelated.

A driving force behind the push for ever-tougher sentences is the for-profit prison industry, in which Wells Fargo is a major investor. Flush with billions in bailout money and an economic system designed to siphon wealth from the working class to the idle rich, Wells Fargo has been busy expanding its stake in the GEO Group, the second largest private jailer in America. At the end of 2011, Wells Fargo was the company's second-largest investor, holding 4.3 million shares valued at more than $72 million. By March 2012, its stake had grown to more than 4.4 million shares worth $86.7 million.

Unfortunately, it's a safe investment. While a 50 percent growth in the number of human beings our society cages in rape factories may sound impressive – or perhaps the word is “revolting” – a study released last year by the Justice Policy Institute found that the private prison industry grew by more than 350 percent over the last decade and a half. While other industries of course benefit from state-granted privileges, companies like GEO profit by the state literally kidnapping and handing them clientèle, particularly as of late about-to-be-deported immigrants, of which President Barack Obama has ensured there is a steady, record-breaking supply.

“All prisons are awful,” says Melanie Pinkert, an activist based in Washington, DC, who along with other members of Occupy DC's “Criminal Injustice Committee” is helping lead a boycott of Wells Fargo, which just expanded to the nation's capital. “But private prisons take it to the next level.” Indeed, a recent report from the U.S. Justice Department found that at one GEO-run juvenile facility in Mississippi, sexual abuse was endemic, “among the worst that we have seen in any facility anywhere in the nation.” According to the report, GEO staff demonstrated:

These findings, shocking though they may seem, are not surprising. With an eye on maximizing quarterly profits, privately run facilities are even less inclined than state-run prisons to treat their involuntary customers humanely, skimping on health care and anything else that could hurt their bottom line, particularly programs aimed at reducing recidivism. As the ACLU noted in a report released late last year, “Not only is there little incentive to spend money on rehabilitation, but crime, at least in one sense, is good for private prisons: the more crimes that are committed, and the more individuals who are sent to prison, the more money private prisons stand to make.”

That's basically what GEO founder and CEO George Zoley told shareholders in his company's 2011 annual report. GEO's business is aided by “strong fundamental trends” in the U.S., Zoley noted. Indeed, even as President Obama talks of potentially cutting Social Security and Medicare benefits, his administration is proposing an increase in federal prison spending. “[I]nitiatives related to border enforcement and immigration detention” in particular, Zoley notes, “have continued to create demand for larger-scale, cost efficient facilities,” leading his company's revenues to rise to $1.6 billion last year – revenues that are in turn used to lobby for stricter laws.

“It's crucial to understand all of this in the context of over-criminalization,” says Pinkert. Prisons are not so much filled with rapists and murderers as they are with people arrested for drug and other non-violent offenses – disproportionately people of color – that only recently have been punished with lengthy terms of incarceration. As Michelle Alexander notes in her book, The New Jim Crow: Mass Incarceration in the Age of Colorblindness, three out of every four black men in Washington, DC, will at some point serve time in prison, not because they use drugs more than the white population, but because they are targets of law enforcement. And fittingly, many of them will be sent to a GEO-run facility built on the grounds of what once was one of North Carolina's largest slave plantations.

Don't expect politicians to address this injustice, though, at least not without a popular struggle. While establishment pundits decry a lack of bipartisanship in Washington, their attention's focused on rhetoric, not so much the reality, which is that when it comes to the major issues – be it the American empire or the war on crime – there is an overabundance of bipartisanship. That's why no one really talks about the more than two million souls currently locked behind bars: at least in Washington, there's nothing to debate, the drug laws that put many of them there – dutifully copied by state legislatures across the country – having been overwhelmingly passed by a Democratic Congress and signed into law by a Republican president.

The political class having failed the public it purports to serve, choosing to imprison much of it for private profit, it's left to the powerless – that would be us – to confront systemic injustice. One way to start: Quit giving your cash to those like Wells Fargo who make money by imprisoning your neighbors. And quit enabling the politicians from both major parties who make that possible.