The coy titles of two new shows, "GCB" and "The B---- in Apt. 2B," show the awkwardness of feminist progress 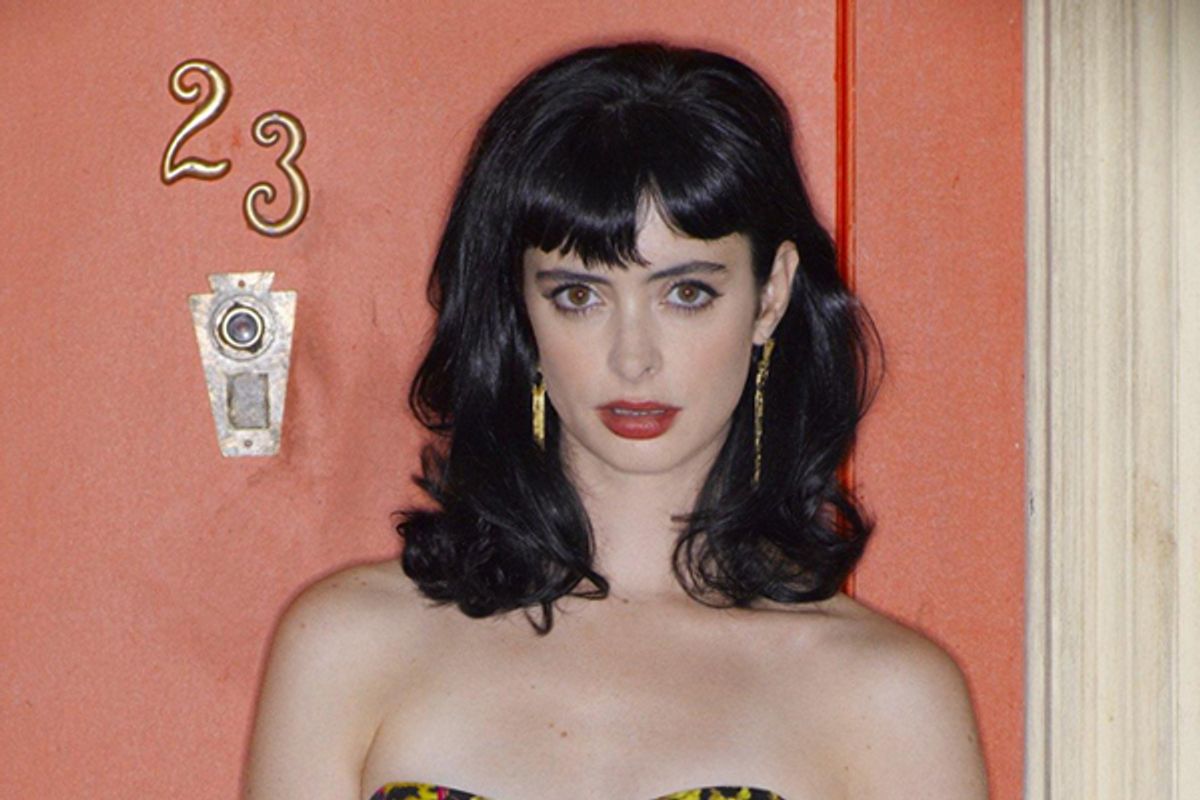 Every morning as I walk my daughters to school, I pass a billboard advertising a new sitcom on ABC. Alongside a close-up of a smug young woman dangling a key off the end of her finger reads: “Don’t trust the B---- in Apt. 23.” And every morning, I'm glad that they're too young to read, not only because the whole thing is so staged and lame, but because of what that dash says. More important, it's what it elides -- how we think and talk about women -- that's very troubling. It's what the title doesn't say that screams the loudest.

My discomfort will come to an end soon. “The B---- in Apt. 23” debuts tonight. The billboard will be replaced, but what it tells us about how we talk about women isn’t going anywhere.

According to Google Books, the word “bitch” appeared 170,710 times in the decade beginning in 2000, almost always in an up-with-women way. (Compare that to the 1930s, when the 11,369 entries ran more to issues of animal anatomy and veterinary medicine.)

Over the past year, in both politics and the entertainment world, talking about women has become an opportunity to fling around insulting language. A lot has been said about “slut,” but it’s that other word — “bitch” -- that really gets at the heart of the issue. “Bitch” occupies a strange and conflicted place in our lexicon and our culture. On the one hand, it’s the ultimate put-down — just ask any woman who’s rejected a sexual advance how it feels to be called a bitch, usually in public. On the other, it’s become a term of affection among, for lack of a better word, the sisterhood.

Which is not to say that we’re entirely comfortable with the word. It still doesn’t pass the polite society test. You still don’t want to say it in front of your grandma. Celebrating — or denigrating — a woman as a bitch still carries a hint of the subversive.

It’s been said that TV is the most democratic of media. If that’s true, then “Don’t Trust the B----” and its big sister, “GCB,” already airing on ABC, have a lot to teach us. Pitched as “Don’t Trust the Bitch in Apt. 23” and “Good Christian Bitches,” respectively, the shows were picked up in part, I suspect, because of the supposed cheekiness of their titles. They communicate an adult sensibility, one that won’t be afraid to ruffle a few feathers.

Except that the titles were changed immediately. “Don’t Trust the B---- in Apt 23,” a half-hour sitcom, tells a classic odd-couple story about two roommates, one a savvy, possibly psychotic con artist, the other a seeming naif who quickly catches on and earns her harder-edged peer’s respect. Inevitably, they become friends, etc., etc. Scared of actually using the word “bitch” in the title, the network suits originally shortened it to the terminally dull “Apt. 23.” When that didn’t catch on, they reverted to the original, adding a pleasing new rhyme along the way.

The same thing happened to “GCB.” Fearing that Christian audiences would be offended, ABC changed “Good Christian Bitches,” an hour-long comedy-drama about a former “Queen Bitch” who returns to her childhood home in the Dallas suburbs, to “Good Christian Belles.” It was then shortened to its current title, a meaningless acronym that no longer seems to refer to anything.

The new shows’ coy evasion is part of a trend. We saw it in the short-lived sitcom “$#*! My Dad Says.” Based on a popular Twitter feed, the network advertised the show as “Bleep My Dad Says.” “Bleep” is a clever ruse, a censoring of the censoring, but anyone familiar with the show’s history, or cartoon graphics, for that matter, knows what “$#*!” stands for.

“$#*!” can’t actually be spoken on TV, but “bitch" can. Not too long ago, hearing the word come out of a character’s mouth raised an alarm. Hell, Lucy couldn’t even use the word “pregnant,” much less anything really salty. Now, “bitch” has become so commonplace it isn’t even edgy anymore, at least after 8 p.m.

There’s a disjunction here, and it points to the fact that, despite its gains, the word still makes us squeamish. After all, ABC wanted the word to titillate and communicate its own hipness, and yet wouldn’t commit to it for fear of offending anyone.

The word itself holds an interesting, perhaps unique, place among our current crop of go-to slurs. These days, we like to insult people based on sexual characteristics. What better way for Americans still squeamish about sexuality to put someone down than by labeling him with a coarse term for actual genitalia? A man can be a “prick,” “dick” or “asshole,” none of which is considered unspeakably bad. Not so for a woman. We reserve our worst for other words, those that begin with "c" and "t" and conflate an ugly image of female genitalia with the behavior and/or attitudes of women. That’s why they are so offensive. They reduce women to the purely bodily and declare that a woman’s body is inherently offensive at the same time.

“Bitch” comes from a different tradition of insult, in which a person is compared to an animal — in this case, a highly sexualized one — and so stripped of some of his or her humanity. Think “cur,” which has an air of old-fashioned quaintness about it. “Bitch” doesn’t have any overtones of a lost, imperial past.

Outside of dog-breeding circles, the meaning of the word has evolved. Tell a man that he is “someone’s bitch,” and you’ve emasculated him. You’ve reduced him to the level of a woman, which, if the slur is used effectively, is the core of the insult. Any woman who is labeled a bitch is, on the other hand, someone who won’t give what’s asked of her. She has broken the social contract that demands women be pliable and accommodating. Which is precisely the opposite of its meaning when used as a compliment. A woman who admiringly calls another woman a bitch is declaring her admiration for someone who won’t conform to those expectations.

What I can’t figure out is what ABC means by it. Are they trying to offend, or are they attempting, in a ham-handed way, to appeal to young women who want to see themselves as rule-breakers? Because I’m not sure that retaining the initial letter and only gesturing to the rest of the word is any less offensive than just saying it. If network standards-and-practices departments allow dialogue to contain the word, then just go ahead and use it in the title. On the other hand, if “bitch” is too incendiary to appear in a show’s title, it shouldn’t be allowed so liberally once the action starts.

We are already familiar with the double use of words once reserved for bigots and misogynists. Marginalized subcultures often reclaim words that have been used to hurt them. But the process is awkward. They speak to a history of relations -- whether they be racial, sexual or gender -- that have been complicated, at best, and brutally unjust, at worst. Examples aren't hard to find. While some people are seen as allowed to use the "n-word," our general discomfort with it isn't surprising in a country where young black men are in danger just walking down the street. The same process has been seen in the gay community, which has embraced "queer." (Remember "Queer Eye for the Straight Guy," which didn't have to tiptoe around a formerly offensive word, because it had been so widely accepted.) "Fag," on the other hand, inhabits that stranger space, in which context is everything: Spat out by a homophobe, it's hate speech. Used by one gay man to refer to another, it can be an affectionate form of in-speak.

And it's what's happening with "bitch." Despite the gains women have made, gender relations in America remain troubled: Widespread wage gaps still exist, as does a paucity of women at the highest levels of power. We’re still arguing about why women get blamed for their own rapes. The list goes on and on. The words we use to refer to women show us how far that process is from being complete. Every once in a while — as with TV-show titles — our ambivalence about them comes into sharper focus.

Rush Limbaugh learned the limits of our tolerance, at least when it come to a public figure attacking a private citizen using a gendered insult. But the powers-that-be at ABC want to play it both ways. They want to wink at an audience that appreciates the audacity and irony of using the word “bitch,” but are still afraid enough that they will censor it, at least partway.

Television is ubiquitous in America. We invite it into our homes and it reflects us back at ourselves. “Don’t Trust the B---- in Apt. 23” and “GCB” tell us something about how we think about ourselves. If TV executives, their nervous eyes trained on Nielsen ratings and the bottom line, can’t figure out our attitudes about how we think and talk about women, then neither can we. I’m just not ready to tell that to my daughters.