A win for social justice 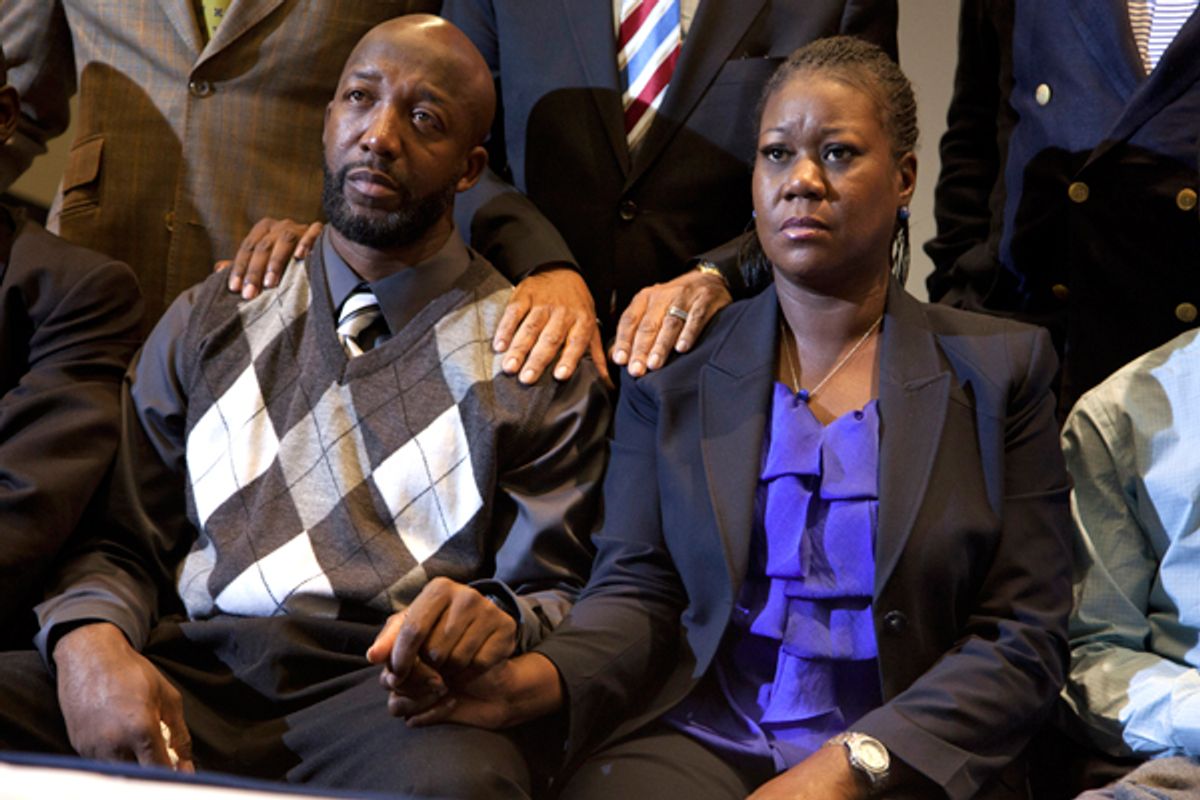 With his dark shirt pulled over his head like a hoodie, George Zimmerman finally made his way to Seminole County Jail Thursday night. Can anyone really imagine this moment without the national movement that emerged to demand justice for Trayvon Martin?

Special prosecutor Angela Corey's decision to charge Zimmerman with second-degree murder in the killing of the unarmed black teenager is just a first step. There's debate about Corey's charging decision and the strength of her case against Zimmerman. A verdict is a long way off. Yet Wednesday represented a victory for the forces of social justice nonetheless.

I have found the backlash against the movement stunning. Go back to the earliest days of the case. After more than a week of being stonewalled by police about the investigation into their son's killing, Tracy Martin and Sybrina Fulton hired lawyers and held a press conference March 8. "We feel justice hasn't been served," Martin told reporters. Police chief Bill Lee Jr. fought back, insisting that his department had conducted a thorough investigation and failed to find reason to charge Zimmerman. "There is evidence that Zimmerman acted in self-defense," he announced. Lee told a Sanford Herald reporter that arresting Zimmerman "would have been a violation of his civil rights." In his public pronouncements he sounded more like Zimmerman's attorney than a law enforcement official looking for the truth. He was eventually suspended.

In fact, it would later be revealed, the lead Sanford Police investigator thought there was evidence to arrest Zimmerman and charge him with manslaughter, but the state's attorney declined. Zimmerman was allowed to keep his gun and go home. Trayvon Martin was tested for drugs; Zimmerman was not. No documentation of his alleged injuries in his "fight" with Martin has yet been produced, if any even exists.

Yet the right wing has mocked and attacked the Martin family's defenders, like Rev. Al Sharpton, now of MSNBC, and The New York Times's Charles Blow (whose March 17 column on the questions around Martin's killing helped make it a national story.) The barbs haven't only come from the right. In a remarkably prissy and poorly informed column, Bill Keller complained, "The shooting of Trayvon Martin has become a cause before it is even a case." Um, Bill, it became a cause precisely because it wasn't a "case;" until activists got involved, the police were insisting flatly "Zimmerman acted in self-defense."

Fashioning a narrative from the hate-crimes textbook — bellowing analogies to the racist nightmares of Birmingham and Selma, as the reliably rabble-rousing Reverend Sharpton has done — is just political opportunism. This is the kind of demagoguery that could prejudice a prosecution, or mobilize a mob.

I don't know about you, but I think the possibility that an unarmed black teenager was murdered in cold blood because someone found him "suspicious," and the police didn't seem to care, is straight out of "the racist nightmares of Birmingham and Selma." I want to stress: We don't know if that's what happened. But the police department's apparent lack of interest in finding out required that people make noise to make the system work. Belatedly, the system is working.

I think a lot of the right-wing hysteria about the movement to demand justice for Trayvon Martin comes from the fact that it's been inspired and aided not by rabble rousers or troublemakers, but by insiders – who happen to be African American. Sharpton has a show on MSNBC; Blow has a perch at the nation's best newspaper (Keller's boneheaded column aside). You could turn on the television and see the Martin story covered by news shows hosted by African Americans – Sharpton or Tamron Hall or Melissa Harris-Perry on MSNBC; Don Lemon or Soledad O'Brien or Suzanne Malveaux on CNN --  who sometimes interviewed other passionate, knowledgeable African Americans like Jonathan Capehart or Karen Finney or James Peterson (of course plenty of white folks talked about the case.) Oh, and our president is black, too. Sad to say, President Obama cued the crazy race baiters when he made his restrained comment, "If I had a son, he'd look like Trayvon."  Deadbeat grifter and racial provocateur Newt Gingrich insisted that meant the president wouldn't have cared if a white child was gunned down, which is crazy.

There's an element of hysteria that makes me think that right-wing whites are afraid that if black people get any real power in this country, they'll use it to treat whites as badly as some whites have treated them. Fox's Sean Hannity and Bill O'Reilly emerged as shrill Zimmerman defenders, as though he was a white Everyman being menaced by a mob simply for defending himself against a dangerous black man – the facts of the case be damned. "First they came for George Zimmerman…"

I have been impressed by the fact that the movement to defend Martin mostly stayed away from demands for vengeance or punishment. For the most part, people were demanding information about the apparently shoddy police procedures; some, like Sharpton, advocated that Zimmerman be arrested.  Sure, people seized on and promoted any evidence that made Zimmerman look guilty. That's part of making clear that an injustice has occurred. But the loony right focused on four New Black Panther buffoons and their racial threats rather than the reasonable demand for answers by Martin's parents.

Throughout this nightmare, I have been inspired and moved by Martin's mother, Sybrina Fulton.  She hasn't been demanding vengeance against Zimmerman. "We simply wanted an arrest," she said at a press conference Wednesday. She thanked Corey and all the people who'd called for justice. "I just wanted to speak from my heart to your heart," she said. "Because a heart has no color. The heart is not white. It's not black."Asked what she hoped her son's killing might eventually accomplish, she said simply, "I hope it will bring people closer together." Let's hope the haters hear her.