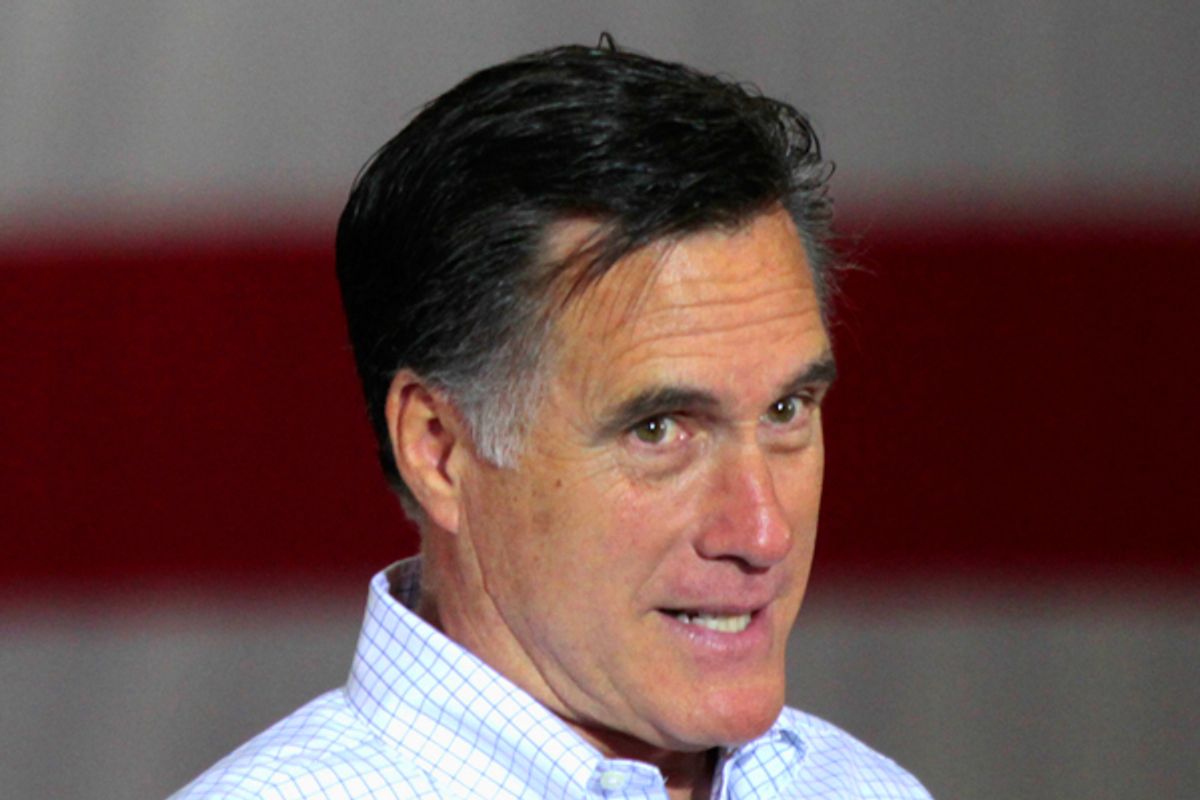 In a past life, as a candidate running for statewide office in Massachusetts, Mitt Romney used to paint himself as a champion of gay rights. While the evidence of his experimentation with supporting legal equality lives on in conservative opposition research, Romney has of late not been particularly eager to push the GOP on LGBT issues. As Maggie Haberman and Emily Schultheis report today in Politico, this has put some of his major gay Republican donors in a bit of a bind.

Lately gay and LGBT-friendly Republicans have taken a major role in bankrolling and organizing the marriage campaign nationwide, as part of a fairly sudden and welcome shift in public attitude toward same-sex marriage and full legal equality for gays and lesbians. Some of the conservatives donating to equality causes have also donated to and fundraised for Romney. They are attempting to justify this fact in a few ways.

First, that Romney and Obama both oppose gay marriage. Which is true!

“Mitt Romney is where President Obama is on this issue,” a Republican backer of the likely nominee said.

Romney, on the other hand, donated to the National Organization for Marriage. And signed its pledge promising to support an anti-gay marriage constitutional amendment. He supports DOMA and even decided last year that he supported "don't ask, don't tell." There are substantive differences in rhetoric and especially actions between Obama and Romney on gay rights.

The second justification is that prominent gay Republicans will help nudge the party toward joining the modern world:

Some Romney supporters argue that it’s better for gay-marriage supporters to ensure people like Singer get a place in the candidate’s circle to advocate for the issue. And others suggest that, while Romney has made overtures toward the conservative wing of the party, no one takes him for a stalwart on the issue.

So, no, Romney probably doesn't actually hate gay people. But the chance that President Romney would "evolve" on the issue of gay marriage once in office is approximately nil.

LGBT groups on the liberal side can credibly claim to have moved the Democratic Party in the right direction, through lobbying and activism and donations. (Though there is obviously still lots of work to be done.) On the right, the Log Cabin Republicans barely exist and their replacement essentially refuses to talk about any rights issues. The most prominent successes pro-equality conservatives have won have all been at the courts, as most of the party's legislators and governors have moved further to the right. Chris Christie won't support gay marriage. Scott Walker doesn't even support basic rights for domestic partners. Dick Cheney didn't notice that he supports equality until after he was out of office. The Republican Party is perfectly happy to take gay money but it has absolutely no interest in moderating its position, and it will not do so until demographics essentially force it to, years from now.

The actual reason for rich gay Republicans to support Romney -- they are rich -- is a perfectly legitimate one. Ranking "economic issues" (your tax rate) over "social issues" (your opportunity to share the same rights as your fellow citizens) is your choice as a voter and donor; it's one of the trade-offs every voter has to make.   But there's no evidence that Romney or the national Republican Party is receptive to an argument in favor of full equality, when their election still depends entirely on turning out people who hate you.