How the drug war hurts everyone

From Wall Street to Oakland, recent events prove the campaign isn't just futile. It's a deadly waste of resources 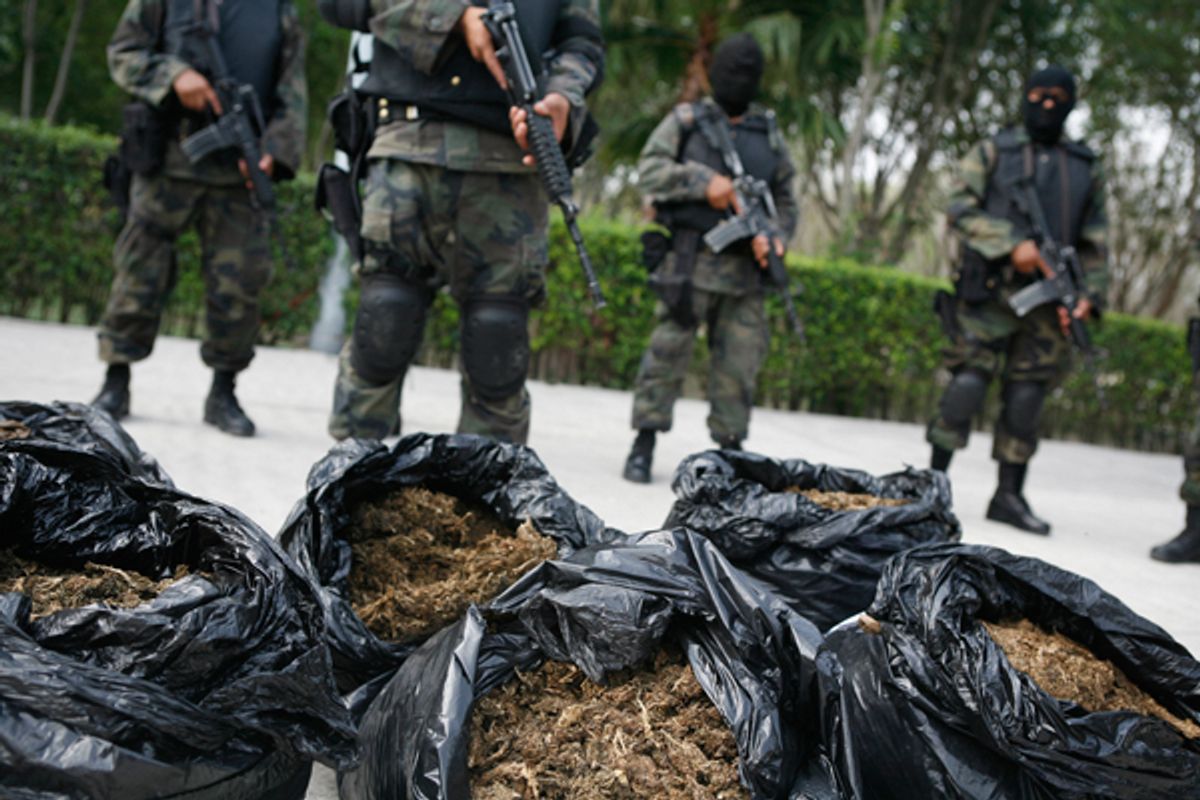 Soldiers stand guard next to bags of marijuana being displayed to the media at a military base on the outskirts of Monterrey, Mexico. (Reuters/Tomas Bravo)
--

Something as massive and amorphous as America's War on Drugs can be difficult to imagine in concrete terms. This web of failed policies is so huge, so persistent and so deeply woven into the fabric of our nation that it's hard to envision an alternative -- or even appreciate what the conflict is currently siphoning resources away from.

That's why the past week has been so important for the cause of ending the drug war -- because it has provided three tragic examples of how that war harms not only its dead and/or incarcerated victims, but also how it makes society as a whole more susceptible to horrific crimes.

In Boulder, Colo., for example, the Daily Camera reports that "the University of Colorado announced a new plan to snuff out the Boulder campus's 4/20 smoke-out, warning that police will ticket pot smokers at this month's event." In a state whose police forces have faced serious budget cuts, this decision clearly reflects a hardcore War on Drugs ideology by removing finite police resources from safety and security operations and instead focusing them on punishing pot use.

That's a key point: Focusing police resources on safety is distinctly different than focusing them on the drug war. As the Camera notes, the new policy is "a more aggressive enforcement tactic than in years past, when officers mostly monitored the crowd for safety reasons." Underscoring that point, notice that one day after the CU announcement, the same newspaper reported that the area near the university campus is experiencing an intense wave of burglaries. Rather than announce a serious crackdown on that crime wave, though, the university is choosing to spend taxpayers' limited police resources on stopping pot smokers.

Back on the East Coast, there's a similar trend. Rolling Stone's Matt Taibbi reports on new evidence that New York City Mayor Michael Bloomberg has not only used CIA tactics to target ethnic communities, but also marshaled his massive police force to expand the so-called "Clean Halls program" in which police enter private apartment buildings to conduct preemptive surveillance. Coupled with Bloomberg's expansion of racially charged "stop and frisks" aimed almost exclusively at prosecuting minorities who smoke weed, the "Clean Halls" program looks like yet another instrument of the War on Drugs.

As Taibbi says, this is not just a problem for the people being harassed by Bloomberg's storm troopers, but for all Americans, because it takes finite law-enforcement resources away from fighting crime in other parts of New York -- specifically, on Wall Street:

We have two definitely connected phenomena, often treated as separate and unconnected: a growing lawlessness in the financial sector, and an expanding, repressive, increasingly lunatic police apparatus trained at the poor, and especially the nonwhite poor. In recent years, as Wall Street firms turned into veritable felony factories, we had pundits and politicians who cranked out reams of excuses for one white-collar criminal after another and argued, in complete seriousness, that sending a rich banker to jail "wouldn’t solve anything" and in fact we should "tolerate the excesses" of the productive rich, who "channel opportunity" to the rest of us. On the other hand, we’ve had politicians and pundits in budget fights and other controversies railing against the parasitic poor, who are not only not "productive" enough to warrant a break, but assumed to be actively unproductive (they consume our tax money and public services) and therefore sort of guilty in advance.

Finally, there was Oakland, Calif. -- one of the most blatant examples of how resources fueling the drug war could have been used to try to prevent a tragedy. Recounting two near-simultaneous events in the city last week, retired police officer Neill Franklin relates how law enforcement officials were swarming to crush medical marijuana oulets at the very moment innocent civilians were gunned down on Oikos University's campus only a few blocks away:

As I sit and watch video after video of Monday's senseless federal raid of Oaksterdam University and other medical cannabis-related facilities managed by Richard Lee, the orchestrator of California's historic Proposition 19, a few serious concerns come to mind.

I noticed agents from at least three federal agencies: the Drug Enforcement Administration, the U.S. Marshals Service and the Internal Revenue Service. I'm not talking about two agents here and a couple more there. There were several dozen federal agents spending their day on the scene.

Meanwhile, just blocks away, a deadly shooting was taking place. While federal agents were using a battering ram, a sledgehammer and power saws to break into a business that complies with state and local law and pays taxes, a gunman was murdering seven people at Oikos University, just three-tenths of a mile away.

Obviously, nobody can say the shooting could have been prevented. But it's fair to say there would have been at least a better chance of that tragedy being averted had our government devoted the same resources to community security that it devoted to pulverizing medical marijuana facilities.

What's particularly horrifying about each of last week's examples is how they show the drug war intensifying even as the public's support for that war precipitously declines.

In Boulder, the university is conducting its crackdown in a state where the majority of citizens voted to legalize medical marijuana and now, according to polls, a near majority support legalizing pot for everyone. Shocking as it is, such defiance of the public will is now the norm in Colorado. Here, state Attorney General John Suthers has backed federal raids on medical marijuana facilities despite the state's vote on the matter and despite his incessant paeans to "states' rights." Meanwhile, the Denver police force has openly defied voter mandates to make pot arrests the lowest priority.

The same goes for New York -- in a state where polls show strong support for some form of marijuana legalization, the Guardian reports that police officers are nonetheless ignoring orders from superiors to reduce arrests of those possessing small amounts of marijuana.

At the federal level, this hostility to public opinion is most overt. The Obama administration has ignored the president's campaign pledges and initiated a new round of marijuana raids at the very moment Gallup finds that a majority of Americans support the effort to fully legalize pot. Additionally, at the same time the administration is decrying budget deficits, the White House is pushing for a big increase in drug war funding, specifically preserving funding formulas that send far more money to the war's militaristic endeavors (interdiction, law enforcement activities, etc.) than to more humane harm-reduction and treatment programs.

Put it all together and we see that the ascendant concept of an "era of persistent conflict" (read: permanent war) is not limited to our foreign occupations. Right here at home, governments at every level are waging a never-ending war without regard for -- and often in brazen defiance of -- what their constituents want.

Sure, pretending that only harms those directly ensnared in the combat may be vaguely comforting -- but as last week proved, that's a fantasy in the age of finite resources.