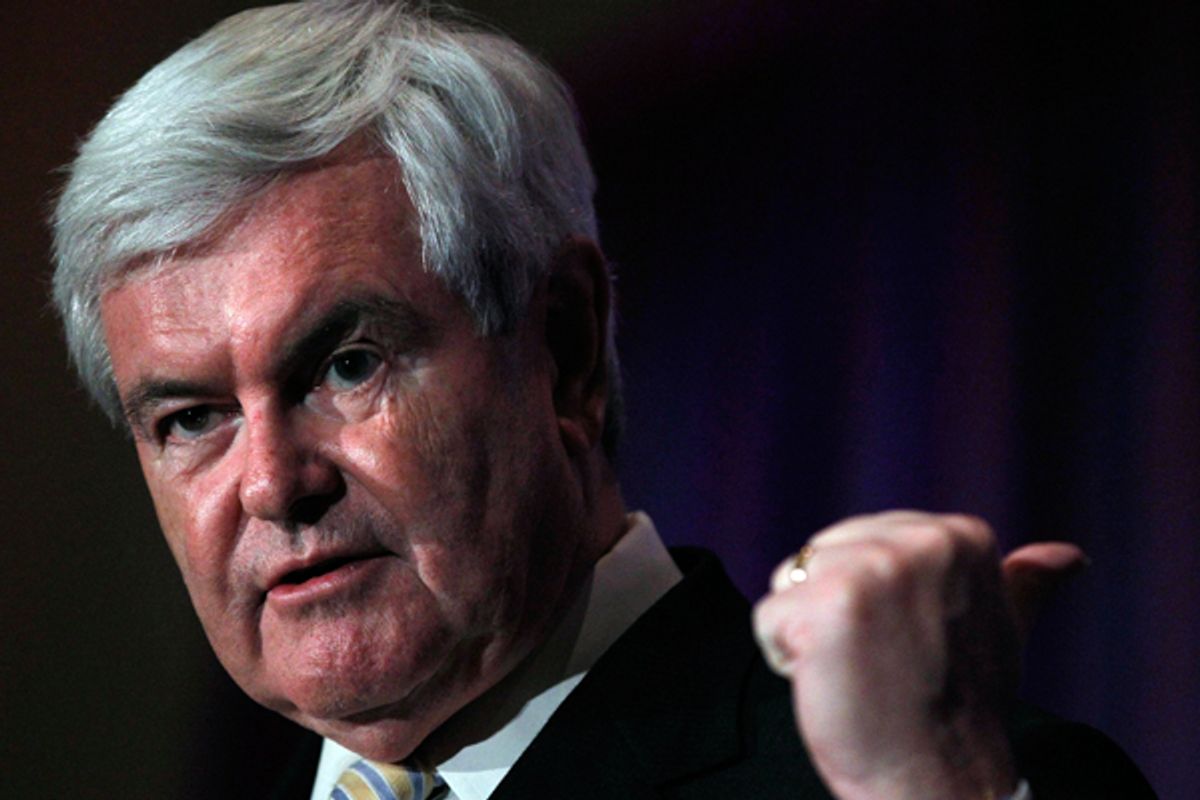 Newt Gingrich thinks that the Fox News Channel destroyed his campaign for the Republican nomination. And he’s right. Well, kind of.

According to Real Clear Politics’ Scott Conroy, Gingrich told a small group of Tea Party activists in Delaware on Wednesday that “I think Fox has been for Romney all the way though. In our experience, Callista and I both believe CNN is less biased than Fox this year. We are more likely to get neutral coverage out of CNN than we are of Fox, and we’re more likely to get distortion out of Fox. That’s just a fact.”

He suggested this was because “[Rupert] Murdoch at some point said, ‘I want Romney.’ And so ‘fair and balanced’ became ‘Romney.’ And there’s no question that Fox had a lot to do with stopping my campaign, because such a high percentage of our base watches Fox.”

There’s definitely something to this. Fox is the preeminent political information source for Republican primary voters, and while its reputation for partisanship is well understood, it also sets the terms of debate within the Republican Party.

Fox’s treatment of Ron Paul is an extreme example of how this works. In 2008, after he netted a surprisingly respectable 10 percent in the Iowa caucuses, Paul was barred from Fox’s pivotal pre-New Hampshire debate – even as Rudy Giuliani, who had finished with just 4 percent in Iowa, was allowed in. And when Paul was threatening to win this year’s caucuses, Fox went after him hard.  Presumably, it was his unorthodox views on foreign policy and national security that made Paul unacceptable.

By comparison, Fox’s disses of Gingrich have been less blunt, but the overall effect of the coverage – sympathetic to Romney and hostile to the former speaker – hasn’t been hard to pick up on if you’ve watched Fox much these past few months. The best way to understand this is probably to go back and reread Gabriel Sherman’s New York magazine piece on Roger Ailes from last May. Sherman detailed how the Fox News chairman had been determined to use his channel to develop potential Obama challengers for 2012 only to grow dismayed by the results:

All the 2012 candidates know that Ailes is a crucial constituency. “You can’t run for the Republican nomination without talking to Roger,” one GOPer told me. “Every single candidate has consulted with Roger.” But he hasn’t found any of them, including the adults in the room—Jon Huntsman, Mitch Daniels, Mitt Romney—compelling. “He finds flaws in every one,” says a person familiar with his thinking.

“He thinks things are going in a bad direction,” another Republican close to Ailes told me. “Roger is worried about the future of the country. He thinks the election of Obama is a disaster. He thinks Palin is an idiot. He thinks she’s stupid. He helped boost her up. People like Sarah Palin haven’t elevated the conservative movement.”

Ailes apparently saw great potential in Chris Christie, and spent much of 2011 trying to persuade him to run. But when Christie, after flirting with a late-starting bid, decided once and for all in October not to run, it became clear that the GOP field was set – and that Romney, for all of his flaws, was the party’s most (and probably only) bankable general election option. This helps explain Fox’s generally helpful coverage of his campaign. And it explains why Fox’s coverage helped to deflate the Gingrich bubble in early December and again after the Jan. 21 South Carolina primary, the two occasions when he seemed like a real threat to steal the nomination.

What Gingrich doesn’t seem to be grappling with, though, is that Fox wasn’t the only opinion-shaping force on the Republican side that was doing this. Both times when he surged into contention, an army of influential conservative voices went to work undermining him. Many of them remembered the grievous political damage he’d inflicted on the Republican Party back in the 1990s; all of them were aware of his profound personal and ethical baggage and his self-destructive tendencies, and recognized that his nomination would be a disaster for the GOP.

In other words, it wasn’t just Fox that brought Gingrich down; it was a wide assortment of conservative leaders, all using their various platforms to make it clear to Republican voters that he would be a uniquely awful nominee. The treatment he received from the Ailes/Murdoch channel was a symptom of the low regard the broader Republican world has for him – not the cause of it.

Nor does Gingrich seem to appreciate the crucial role Fox played in facilitating his return from political exile early last decade. Gingrich, don’t forget, was kicked off the political stage by his own party after the 1998 midterm elections. And his embarrassment grew worse when it was revealed months later that he’d actually been conducting an extramarital affair while leading GOP’s push to impeach Bill Clinton over his relationship with Monica Lewisnky. Gingrich was supposed to be gone from politics for good. But Fox was willing to put him on and treat him as an elder conservative statesman, allowing Gingrich to spend the aughts restoring his standing with rank-and-file Republicans across the country.

So while it’s fair to say that Fox played a big role in the demise of his presidential campaign this year, it’s equally true that Fox is the main reason there was a Gingrich campaign in the first place.