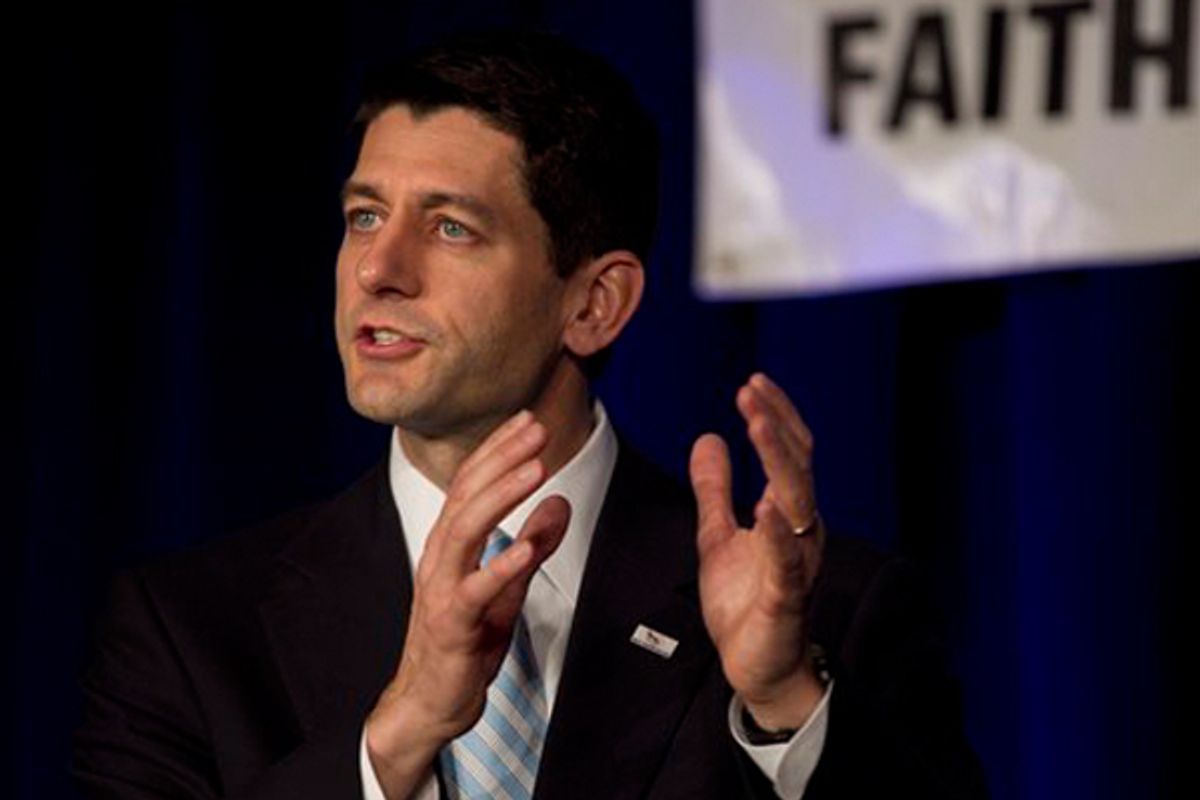 Rep. Paul Ryan R-Wis., the mastermind of what New York Times columnist Paul Krugman calls an “inconceivably cruel” budget, has once again tried to claim that Jesus would approve of it. Speaking to David Brody of Pat Robertson’s Christian Broadcasting Network this week, Ryan described how his Catholic faith, particularly the tradition of subsidiarity, is reflected in his scheme to cut the deficit by slashing programs like Medicaid, Pell Grants, food stamps and job training.

Subsidiarity, Ryan contends, is nothing more than the theological justification for shrinking the federal government down to a size that will fit in Grover Norquist’s bathtub. If I were a cartoonist, I’d draw Ryan dreamily doodling Jesus’ name on the Federalist Society masthead.

For many Catholic scholars and theologians, though, Ryan’s views are both laughably and dangerously wrong. As Daniel Maguire, a Catholic ethicist, wrote even before Ryan’s interview with Brody, subsidiarity “means that nothing should be done by a higher authority that can be done by active participation at lower levels. Right-wingers like Paul Ryan grab that one word, ‘subsidiarity,’ and claim it supports their maniacal hatred of government. It doesn’t.”

Joseph Palacios, Adjunct Professor of Latin American Studies at Georgetown University, told me, “Historically, Christian Democratic parties in Europe and Latin America have used subsidiarity to highlight the need for a social safety net to guarantee the common good that gets organized and guaranteed through state functions such as healthcare, education, economic development, housing, transportation.” Here in the U.S., though, Palacios says, “a lot of progressive
Catholics are unfamiliar with this principle and have allowed it to be usurped by conservatives and libertarians in the Church,” who attempt to lend religious justification for the position of Catholic Republicans like Ryan.

These disputes — particularly for a religion reporter like me — are the stuff of fascinating and illuminating stories on religious history, theology and political gamesmanship. In a pluralistic democracy, though, they have no place in determining the federal budget.

No one’s religious view is entitled to preference when Congress is crafting the federal budget. To be sure, given the attention paid to the plight of the poor by the most prevalent religions in the United States, there are many politicians, and many citizens, whose faith would inform how they evaluate the priorities — or lack thereof — in the Ryan budget. At the same time, secular humanists, atheists, and other varieties of the non-religious also have a set of values on income and wealth inequality.

Progressives and conservatives should duke it out — but without invoking religion. The budget should be based on shared concepts of fairness and justice, not whether Jesus or God or Allah (oh, never mind, the Republicans would never go for that!) approves.

But Ryan, who did not invoke his faith when first offering his budget proposal, is now scrambling to devise a post-hoc theological justification for it. This week’s revelations to Brody were hardly his first salvo. Last spring, he and his fellow Catholic, Speaker John Boehner, sought approval from clerical authorities.

Boehner, for his part, already had come under fire from Catholic academics for his deviation from church teachings. In a May 2011 letter reacting to his upcoming commencement address at Catholic University, the academics told Boehner, “[f]rom the apostles to the present, the magisterium of the church has insisted that those in power are morally obliged to preference the needs of the poor” (a principle Ryan claims his budget upholds). Boehner’s record on addressing “the desperate needs of the poor,” the academics charged, “is among the worst in Congress.”

Ryan and Boehner dashed off a letter of their own, to then-Archbishop (now Cardinal) Timothy Dolan, the president of the U.S. Conference of Catholic Bishops. Dolan, of course, does not mince words when reacting to perceived transgressions by elected officials. In January, he pronounced the Department of Health and Human Services requirement for insurance coverage for contraception “literally unconscionable” and on Easter Sunday described it as a “dramatic, radical intrusion of a government bureaucracy into the internal life of the Church.”

Such bombast was notably missing from his letter responding to Ryan and Boehner. It’s true that Dolan’s letter didn’t directly say Ryan’s budget was in line with Catholic teaching, only that Dolan appreciated Ryan’s effort to claim (however disingenuously) that it was. But given that Obama made significant efforts to yield to religious objections to the contraception rule and has been treated only to vitriol from the bishops and their Republican allies, it was significant that Dolan was far more gentle with Ryan: “Care must be taken that those currently in need not be left to suffer. I appreciate your assurance that your budget would be attentive to such considerations and would protect those at risk in the processes and programs of such a transition.” Not, take note, “literally unconscionable.” Even though it is.

Liberals, for their part, have sought to counter Ryan with more religion. Last year, in a stunt staged at Ralph Reed’s Faith and Freedom Coalition conference, fellow Catholics confronted Ryan and tried to give him a Bible with passages on the poor highlighted. An anti-Ryan advertisement was critical of his admiration for Tea Party heroine Ayn Rand — not because of her cruelly libertarian views on economics, but because she was an atheist.

More recently, a coalition of Christian, Jewish and Muslim leaders known as the Faithful Budget Campaign have pushed back against Ryan with their own Faithful Budget. The coalition says its “faithful” budget “protects the common good, values every individual and lifts the burden on the poor.” These are worthy goals, but shouldn’t be elevated merely because they have a religious imprimatur.

Surely it’s understandable that liberal Catholics are angry that Ryan is misrepresenting their faith to justify his punishing and heartless assault on his fellow Americans. They should — and they will — persist in protest, in discussion and in argument. But just as Ryan shouldn’t run to Cardinal Dolan for approval, or at least acquiescence, nor should liberals seek religious cover for their counter-proposals. Religious leaders and voters are free to have their say, but when it comes down to the rationale for defeating Ryan’s budget, it should be based on the economic realities of the people whose lives would be destroyed by it, coupled with a cogent case for the role of government, and not on theology.