The Guns 'n Roses frontman turns down the hall of fame, but no rocker in decades has had more influence. Kurt who? 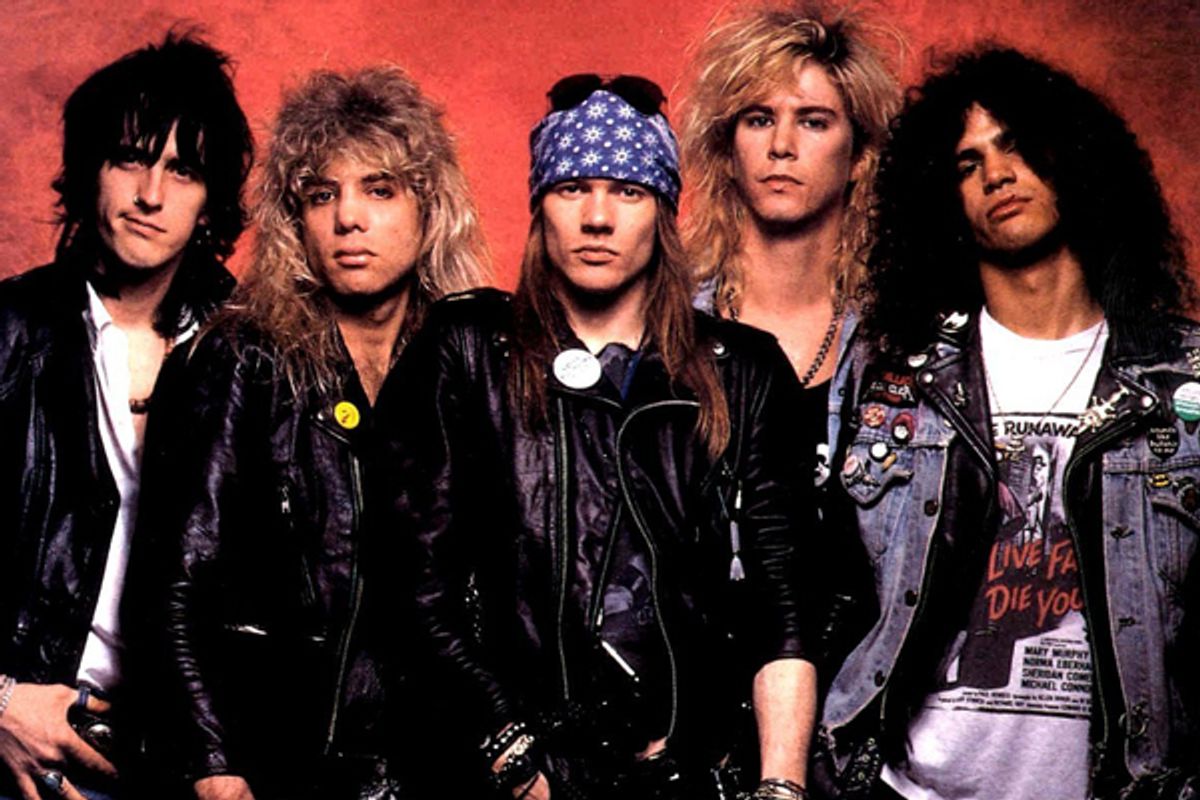 Axl Rose may not want to be in the Rock & Roll Hall of Fame, but his refusal to attend the induction ceremony is actually a fitting controversy -- and explains why Guns ’n Roses deserve to be enshrined.

The debate has played out on the band’s Facebook page ever since the band's induction was announced weeks ago. Jubilant congratulations alternated with fans imploring Axl Rose, the lone remaining member from the band’s late -’80s “classic” lineup, to reunite with his former bandmates to mark the occasion. Specifically, the diehards pleaded for the five ragtag hellraisers behind 1987’s landmark debut, "Appetite For Destruction" — Rose, guitarists Slash and Izzy Stradlin, bassist Duff McKagan and drummer Steven Adler — to set aside their differences for at least one night.

On Wednesday, Rose quashed any speculation about a reunion with a two-page open letter in which he announced he wouldn’t be attending Saturday’s induction ceremony in Cleveland. Furthermore, he “respectfully decline my induction as a member of Guns N' Roses to the Rock And Roll Hall Of Fame. I strongly request that I not be inducted in absentia and please know that no one is authorized nor may anyone be permitted to accept any induction for me or speak on my behalf. Neither former members, label representatives nor the Rock And Roll Hall Of Fame should imply whether directly, indirectly or by omission that I am included in any purported induction of ‘Guns N' Roses.’”

In a puzzling contradiction, he closed the letter by “sincerely thank[ing] the board for their nomination and their votes for Guns' induction.” (In response to this lengthy statement, the Rock Hall simply said: “We are sorry Axl will not be able to accept his Induction in person.” Rose’s refusal to play by the rules isn’t a surprise; the band built its legacy on flouting convention.

The mercurial personalities of the most popular GNR lineup boozed hard (and, in some cases, drugged hard), played hard and made rock & roll truly dangerous again. Musically, the band’s predilection for danger was also its biggest asset. "Appetite For Destruction" — which has sold over 18 million copies in the U.S. alone — was aggressive, hungry and subversive. A distillation of Aerosmith’s sleazy boogie, the Rolling Stones’ strut, AC/DC and Rose Tattoo’s jagged metal and L.A.’s ever-present glam-rock and punk scenes, "Appetite" was an antidote to the glossy arena-metal popular at the time and remains a landmark album. GNR set fire to complacency — and merged authentic punk attitude with hard rock’s swagger better than any other band to date.

"G N’ R Lies," an eight-song EP released in late 1988, capitalized on the band’s meteoric rise. It also revealed their depth: "Lies’" single, “Patience,” was acoustic and subdued — the polar opposite of "Appetite’s" snarling fury. While nearly all hard rock bands in the ‘80s had a token sensitive tune, “Patience” was spare and vulnerable, and devoid of the self-indulgence found on other introspective songs.

Conventional wisdom goes that Nirvana’s 1991 major-label debut, "Nevermind," and the ensuing alternative nation onslaught cemented hair metal’s extinction. But GNR inflicted the first wound; sonically, "Appetite" and "Lies" primed mainstream music to be open to Nirvana’s raw angst and metallic punk. (Ironic, given there was no love lost between Kurt Cobain and Axl Rose; YouTube teems with clips of each man disparaging the other.

Not that the mainstream welcomed GNR with open arms. Even after signing with Geffen, they weren’t instant superstars. In an article titled “Full Metal Racket!” which appeared in Billboard’s 1987 year-end issue, Bon Jovi, Poison and Whitesnake received generous write-ups, while Axl and Co. were merely described as an “up-and-coming band making a buzz,” along with MSG, Faster Pussycat and T.N.T. At that point, "Appetite" had been in stores for five months.

More important, according to Rob Tannenbaum and Craig Marks' recent book, "I Want My MTV: The Uncensored Story Of The Music Video Revolution," MTV only started playing the "Appetite" single “Welcome To The Jungle” in regular rotation after David Geffen personally called the channel and asked them to play the video more. After “Jungle” and the more accessible “Sweet Child O’ Mine” video caught on with viewers, GNR exploded. And with that, their tenure as wildly creative video artists commenced.

In fact, the enduring legacy of 1991’s "Use Your Illusion I" and "Use Your Illusion II" (both of which just so happened to be released a week before "Nevermind") is their videos. Shot in stark black-and-white, “Yesterdays” splices photos of the band’s younger days with simple performance footage taken from a warehouse. The clip for the livewire metallic-punk blast “Garden Of Eden,” in contrast, is subtly funny: Shot from one vantage point, it features Rose motormouthing the lyrics with exaggerated movements, as his band shreds behind him. The hard-rock ripper “You Could Be Mine” is tied to the soundtrack of "Terminator 2: Judgment Day"; footage from the movie and of a bad-ass Arnold Schwarzenegger heightens its impact. And “Dead Horse” and GNR’s version of Paul McCartney & Wings’ “Live And Let Die,” while somewhat pedestrian performance videos, demonstrate the band’s immense power as a live act.

"Illusion’s" best-known clips are for the trilogy of “Don’t Cry,” “November Rain” and “Estranged,” however. Mini-movies rather than simply music videos — and based around a short story by journalist/writer Del James, a friend of Axl Rose — they were some of the most elaborate clips ever filmed. Exotic, mysterious and expensive, each video reportedly cost over $1 million to make. Critics called the videos self-indulgent, and the imagery and plot points could be obtuse; see the presence of dolphins everywhere in “Estranged.” (Amusingly, "I Want My MTV" quotes the trilogy’s director, Andy Morahan, as saying, “I’ve been asked by students about the metaphorical imagery in those videos, and I’m like, ‘Fuck if I know.’”)

Sitting down to watch the nine-minute-plus videos for “November Rain” and “Estranged” took commitment, but it was something viewers anticipated; the clips’ appearances on MTV weren’t to be missed. They were must-see events, a shared experience — something not found in music videos again until the arrival of Lady Gaga. And like the latter, GNR used the medium in powerful, striking ways. Instead of acting out goofy or scripted storylines, the band kept things eerily parallel to their actual lives, making these videos touching personal documents.

In hindsight, the video trilogy feels like the closing of a chapter, the band looking back on their simpler days. But the original GNR seemed built for implosion, so intense they could only burn brightly for a few years. And now, it’s easy to forget how massive the band were between 1988 and 1993. They toured with Metallica and Aerosmith, headlined stadiums and hobnobbed with their idols; Elton John played piano on “November Rain” with them in 1992 and Queen’s Brian May opened for them on the "Use Your Illusion" tour. And GNR accomplished all this despite unpredictable behavior and ever-increasing internal (and external) conflicts, including riots at concerts in St. Louis and Montreal; uproar over lyrical content that was perceived to be racist, homophobic and violent; very-public bouts of intoxication and rude behavior; chronic lateness and lawsuits. GNR were never safe — and they were never boring.

Perhaps the biggest tribute to the band — and the testament to their singularity — is that nobody has ever managed to duplicate the essence of their music. Radio rock acts such as Buckcherry and Hinder, raunch-rockers such as Nickelback, and Japanese acts X Japan and Dir En Grey can trace their lineage to Axl & Co., and any mainstream band grafting punk’s aggressive tempos to metal’s thrashier side has GNR to thank for kicking the door down first. But the danger dished out by many of these groups is often cartoonish and calculated, a third-rate Xerox of hazardous behavior.

For the last 15 or so years, naysayers and disgruntled fans have viewed GNR the same way: a pale imitation of their former selves. Besides Rose, only keyboardist Dizzy Reed — who joined the band in 1990 — has a link to GNR’s salad days; the rest of the lineup includes superb players with impressive résumés. However, these newer musicians don’t have the notorious reputations — or drama-filled lives  —of the golden-age lineup. To purists, the band’s continued existence with people who aren’t the classic-era quintet has spoiled the band’s legacy.

But the possibility of something unexpected, exciting and controversial remains omnipresent in GNR’s universe, especially because Rose is at the band’s center. The frontman is one of the last true rock & roll stars, a celebrity whose erratic behavior and grandiose gestures weren’t (and aren’t) calculated to get him a reality show. He’s not worried about how others perceive his actions; frankly, he courts bad publicity. And Rose is unique in the cult of celebrity: His life is shrouded in mystery, and his motives remain elusive, which is refreshing (and odd) in a society where life doesn’t happen unless it’s documented. Even his official Twitter, @axlrose, doesn’t give too much away.

It’s a shrewd stance, this secrecy, one which has kept the band compelling. Rose has guaranteed the myth of GNR still overshadows their reality. And isn’t the latter a hallmark of all great rock & roll bands? In fact, there’s something admirable about Rose sticking to his guns and refusing to give in to nostalgia. GNR never did what they were “supposed” to do — and still don’t — which is how they shook rock & roll out of the doldrums. Even if Rose chooses not to participate in formal recognition of his accomplishments, that doesn’t change how vital GNR is to the evolution of rock & roll.