The martyrdom of Ann Romney

She wasn’t really the victim of a smear by an “Obama adviser,” but the right will treat her like one anyway 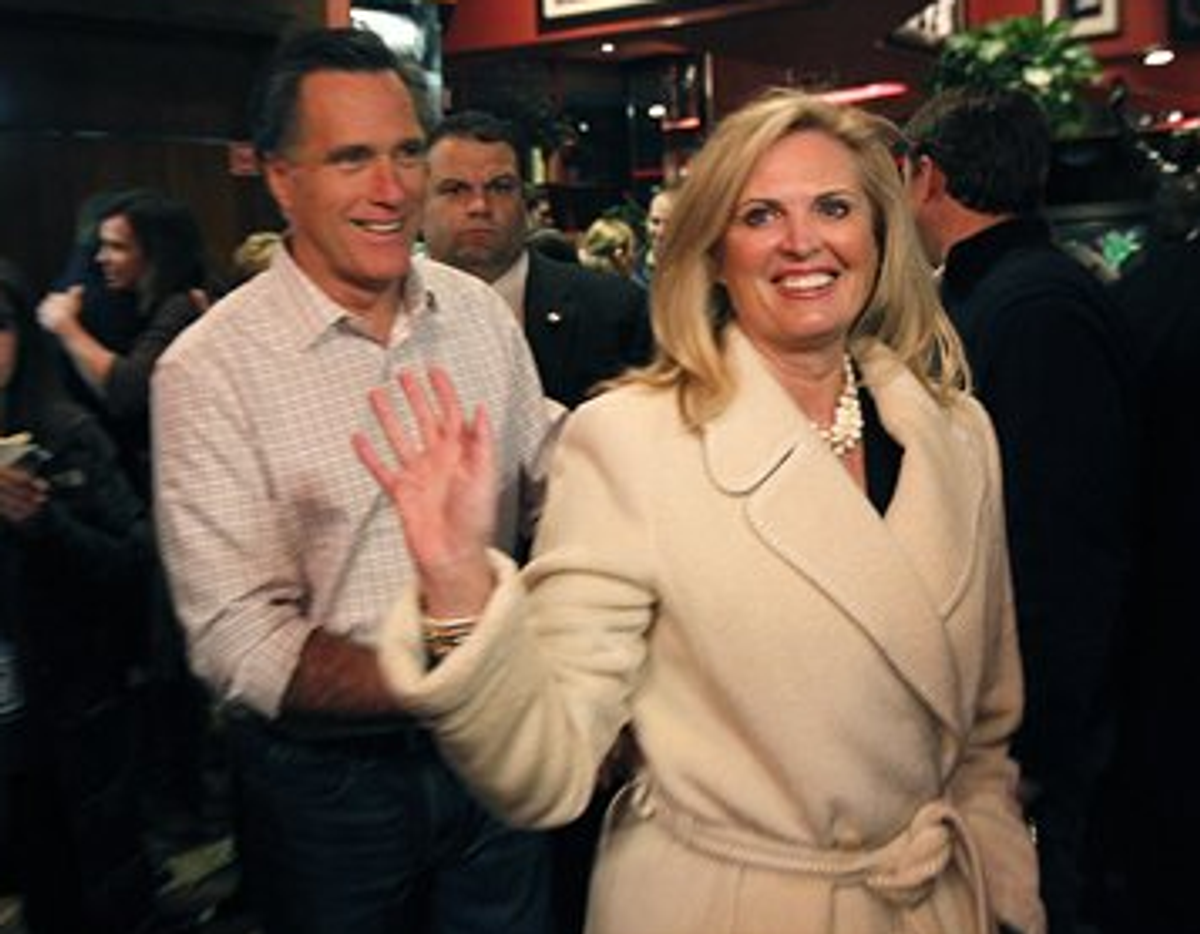 Hilary Rosen is a Democratic political consultant and CNN contributor who has no official ties to the White House or the Obama campaign. Nor is there any evidence that she enjoys any informal, behind-the-scenes clout with the president and his inner circle.

But in 2008, two years before it hired her, the firm that now employs Rosen did work for Obama’s campaign, and she does currently advise the Democratic National Committee, meaning there was just enough guilt-by-association for one of Mitt Romney’s top aides to tweet out the news late last night that

Fehrnstrom was referring to Rosen’s comment on Anderson Cooper’s CNN show that Romney’s wife, Ann, has “never worked a day in her life.” Yes, that sounds harsh, but as is often the case with these things, it’s a lot less inflammatory when you consider the context.

Rosen was responding to a question about Mitt Romney’s efforts to tailor his economic message to women voters. She began by noting that he’s “running around the country saying, ‘Well, you know, my wife tells me that what women really care about are economic issues, and when I listen to my wife, that's what I'm hearing.’”

This was a reference to what Romney said at a news industry convention last week when he was asked about the gender gap: “My wife has the occasion, as you know, to campaign on her own and also with me, and she reports to me regularly that the issue women care about most is the economy.”

Then Rosen uttered the words that sent the right into a tizzy: “Guess what?  His wife has actually never worked a day in her life.  She's never really dealt with the kinds of economic issues that a majority of the women in this country are facing in terms of how do we feed our kids, how do we send them to school, and why we worry about their future?”

Rosen probably should have known better. Going on a talking head show and bringing up a widely-liked spouse who generally tries to avoid the campaign limelight is asking for trouble in today’s media environment.

Still, it’s not hard to understand the point Rosen was trying to make, and to recognize that her criticism was directed at Mitt for seeming oblivious to the everyday economic concerns of working women – not at Ann for her decision to be a full-time mother. And if there was any confusion, Rosen sought to clear it up in a Twitter message after the show: “When I said @AC360 Ann Romney never worked I meant she never had to care for her kids AND earn a paycheck like MOST American women! #Truth.” She also devoted an entire blog post to explaining what she did – and didn’t – mean.

But this was too easy an opening for the Romney campaign to pass up.

After Fehrnstrom’s tweet, Ann Romney herself joined Twitter and sent out this inaugural message: “I made a choice to stay home and raise five boys. Believe me, it was hard work.” Her son joined in, and soon all of the usual conservative suspects were screaming about the Obama advisor’s vicious personal attack on Mitt Romney’s wife. Before you knew it, Politico’s Dylan Byers was reporting that Ann Romney would be appearing on Fox News on Thursday.

For Romney’s campaign, the chance to play victim couldn’t possibly come at a better time. There’s now clear polling evidence that a large number of women have moved from their camp to Obama’s since the GOP picked a fight over contraception a few months ago. Yesterday, Romney’s first full day as the presumptive nominee, was supposed to represent the campaign’s first concerted effort to narrow the gender gap, but Romney and his surrogates instead found themselves on the defensive over the Lilly Ledbetter Fair Pay Act. Rosen’s late-night remark was just the distraction the Romney campaign needed to change the subject.

At the same time, Obama’s team didn’t do Rosen any favors. Both Jim Messina, the president’s campaign manager, and David Axelrod, his top political adviser, sent out tweets condemning her. “I could not disagree with Hilary Rosen any more strongly,” Messina wrote. “Her comments were wrong and family should be off limits.” Their response is understandable; why go to bat for a television commentator who has no actual ties to the campaign when all it will do is extend the controversy’s shelf life? Better to just join the pile-on and hope it all goes away quickly.

Which it probably will. But don’t worry – we’ve got seven more months of this stuff before Election Day.

Update: It looks like initial reports that Rosen advises the DNC were incorrect, making efforts to connect her to the Obama campaign even more of a stretch.