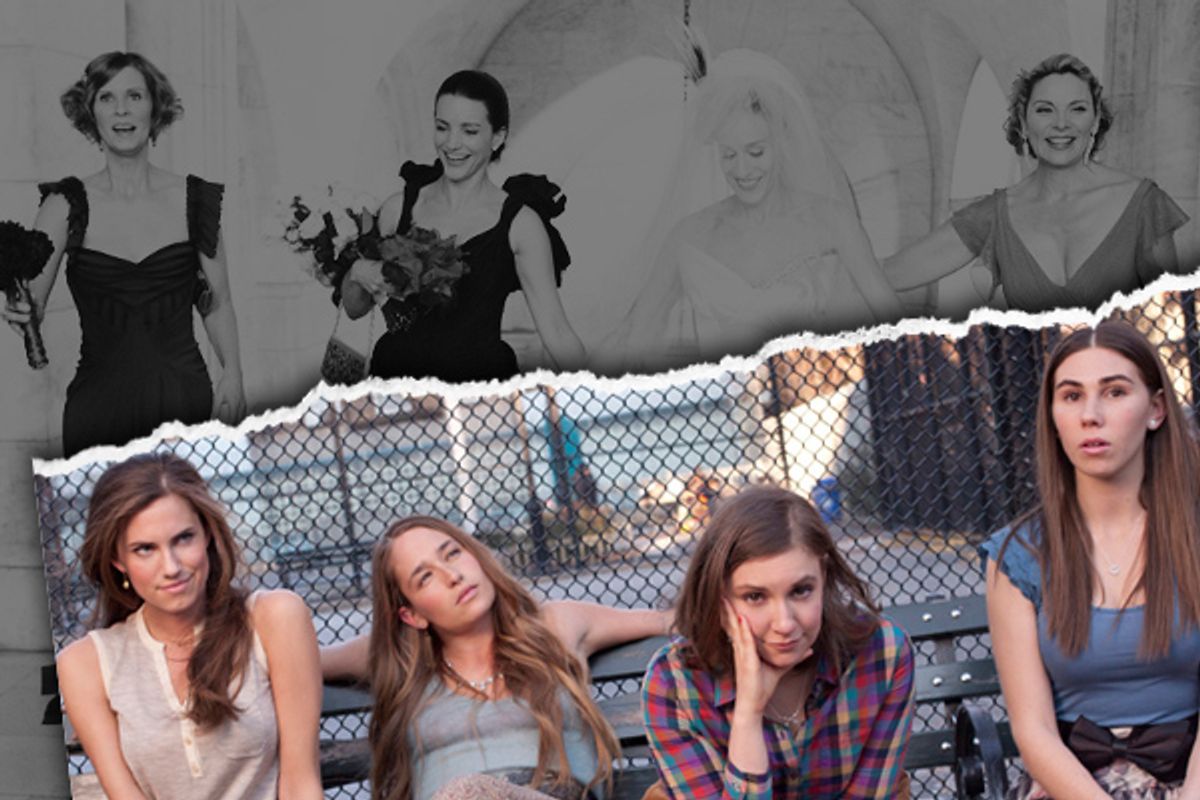 A young woman sleeps in her bed, in the embrace of someone who has a leg draped over her thigh and an arm comfortingly around her middle. When the alarm clock buzzes, jolting this spooning pair to consciousness, we realize that they’re not a romantic couple; they are best friends and roommates, Hannah and Marnie.

It’s an early, lovely moment in "Girls," the new HBO series created, directed, written, produced and, really, detonated onto the pop landscape by 25-year-old Lena Dunham. Dunham stars as Hannah, who is joined in bed by Marnie because Marnie is avoiding having to be touched by her over-kind swain, and because both girls like to stay up late watching reruns of "The Mary Tyler Moore Show."

These details, along with the image of two friends snoozing happily entwined, make the moment emblematic of a dynamic central to "Girls’" appeal and its importance. Despite Dunham’s protestations about not wanting to be some symbolic emissary from the land of young ladies (Sorry, kid, you’re it!), this is what she’s telling us about Women Right Now: that the lives of contemporary Mary Richardses and Rhoda Morgensterns are not based on pursuit or enjoyment of hetero congress; rather, they are often most firmly and warmly wrapped around each other.

You have likely already read something about the sex on "Girls," which in early episodes, at least, all takes place between straight, sort-of-realistically-bodied young people. What you’ve read is true: the show’s abundant sex – as experienced by its four female leads – is either boring and unsatisfying, porn-fantasy-driven and unsatisfying, nonexistent and unsatisfying, or performed as conquest (Jessa says after bagging an ex, “That was me showing that I cannot be smoted. I am unsmoteable”) and yet … unsatisfying. Sex for these young women is an awkward element in their lives, and whether you think that this characterization is hilariously awful, worryingly awful, or whether it prompts you to reflect, once again, on how everyone else but you is a prude, there is no question that "Girls" features some awful, awful sex.

But part of the point of "Girls" is that the sex, and the guys with whom the sex happens, are not the point. Instead, as titularly advertised, "Girls" is about girls, and the fact that they do make connections – emotional, intimate, irritating, satisfying, pleasurable, lasting. Just not, so far anyway, with men. The show, among many other things, is crucial and corrective testament to the ways in which women's friendships with each other have flourished and changed during the same period in which their liberties and status have increased.

Minutes into the first episode, Hannah sits naked in a bathtub eating a cupcake, laughing pityingly with a betoweled Marnie about Marnie’s emasculated boyfriend. When the boyfriend accidentally comes into the room, it’s clear he has no place in this room of unclothed communion. A similarly awkward entrance occurs later, during one of several scenes in which one of the four lead characters sits on the toilet, making serious confessions (of pregnancy, for instance) to a girlfriend while peeing. The bodily closeness depicted on "Girls" makes flesh the role these women play in each other’s lives: They are the non-sexual lovers of each other.

It’s the girlfriends who provide the physical affirmations usually associated with boyfriends. “You are beautiful, shut up,” Marnie tells self-deprecating Hannah. “Your skin is, like, hauntingly beautiful,” Long Island girl Shoshanna says to her worldly cousin Jessa. “When I look at both of you, a Coldplay song plays in my heart,” Hannah tells Marnie and Jessa, kidding but serious. In one scene, having been meanly rejected by a boy because of her virginity, Shoshanna desperately asks her friends if they would have sex with a virgin, meaning her. “Oh Shosh,” Jessa says kindly, “if I had a cock, it’s all I’d do.” You get the feeling that she means it; if they could provide that kind of fulfillment for each other, they would.

This same-sex affinity feels extremely contemporary, part of what has prompted critics to write about the show as revolutionary. But noting female friendship as a (or the) primary source of emotional sustenance only feels strange in the context of relatively recent history; in fact it’s a dynamic that is very old.

For the many centuries during which marriage was regarded as an economic and a socially ratifying necessity, rather than as an institution from which women could reasonably hope to derive emotional or sexual pleasure, intense social and physical bonds between women were an accepted part of life. From Celia and Rosalind in "As You Like It" to Hermia and Helena in "A Midsummer Night’s Dream," whom we’re told were as close as “two lovely berries, moulded on one stem,” Shakespeare regularly used the assumed closeness (and sometimes the bed-fellowship) of women as a plot device. Much of what we learn of the fate of Samuel Richardson’s Clarissa Harlowe is from letters to her best friend, Anna Howe. Then there's Lucy Montgomery’s Anne Shirley, who meets her “bosom friend” and “kindred spirit” in Diana Barry.

The term “Boston marriage” was used during the late 19thcentury to describe unmarried women who lived together in long-term partnerships. In “Bachelor Girl,” a history of single female life in the United States, Betsy Israel writes that around the same period, near-romantic female bonds were encouraged by parents. Two girls, meeting perhaps in school, would be “‘smashed’ – think of best friends going steady – and once smashed, they’d learn trust, loyalty, tolerance, patience.” Of course, all that social growth was supposed to be in service of marriage. “Once they’d mastered these skills,” Israel writes, “they would be able … to transfer them onto a marital relationship. Even if those who wed never felt quite the same about their husbands.”  For a long time, there was no questioning the sexuality of women who held hands, slept side-by-side, confided in each other or wrote long love letters to one another.

It wasn’t until the early 20th century, as marriage came to be treated as a union based on love and sex, that same-sex friendships began to be seen as competitive to the closeness a woman was supposed to feel to her husband, and thus as sexually suspect. Marriage historian Stephanie Coontz has described how, by the end of the 1920s, American psychoanalyists “were warning that one of the most common ‘perversions of the libido’ was the tendency of teenage girls to fix their ‘affections on members of the same sex.’ Such perversions, they claimed, were a serious threat to normal development and to marriage.” The fix, Coontz writes, was to discourage social unions between women and encourage more early sexual experimentation between the sexes. Networks based on female camaraderie, trust and dependence began to break down.

These mid-20th-century decades are the ones on which most of us have drawn, until recently, our understanding of how a woman’s life is supposed to proceed. They were years in which women made stupendous social, economic and professional strides, yet during which they were still told to pursue, and mark their graduation to adulthood with a “traditional” marriage, in which a man is lover, confidant, provider, partner and companion. These were also years in which messages about women’s behavior toward women were nasty; girls were hair-pullers, back-stabbers and bitches, always after each other’s jobs, wardrobes and men.

Now, it seems, we are coming out on the other side of the looking glass. The median age of first marriage for women has been rising steadily since the late 1980s. Marriage – while still widely fetishized as some kind of goal – is no longer the only acceptable marker of maturity. The idea of young adult women living, working, earning, spending and having sex on their own, outside of marriage, is, in many parts of this nation, not aberrant, but an expected phase of life, a norm.

These are Dunham’s "Girls," and while the privileged Oberlin grads depicted on the show are members of the demographic statistically most likely to eventually marry – and to enjoy successful companionate marriages – their walks down aisles might well not take place for a decade or more. During that period, the people with whom they are likely to form their most intense emotional partnerships are, like the smashes of old, other young women. Except now, the smashes are happening not in anticipation of unfulfilling marital futures, but in advance of potentially happy marriages; they’re not a reflection of the powerless quandary of women compelled to marry practical strangers for money and social acceptance, but rather of a generation of women who, even if they don’t yet have real power, experience historically unprecedented autonomy and freedom.

Yes, we’ve seen friends on television before.  From Mary and Rhoda to Laverne and Shirley to, yes, the show that must not be named but to which "Girls" is always compared. But Carrie and her brightly colored cadre made history in almost cartoonish fashion, in which material consumption was supposed to be symbolic of social liberty (until it just became material consumption), in which friendship was a public performance enacted in expansive shiny clubs over jewel-colored cocktails. Those flamboyantly drawn expressions have given way to Hannah and Marnie, who breakfast in their grim apartment kitchen, Marnie listening with irritation as Hannah slurps her cereal milk and talks with her mouth full, like regular best friends, not fabulously implausible best friends.

Their life is not one of aspirational adornment, but of the quotidian realities of (even privileged) young adult life, in which the people you trust and argue with and talk to at the end of the day about your job, whom you share beers and breakfasts with, are your girlfriends.

It’s hard to talk about the role of female friendships without making them sound like placeholders for marriage. But it sells female friendship very short to regard it as some kind of training ground for later, committed heterosexual (or homosexual) partnership. These relationships take place not in some liminal state, as women are waiting for “real” life to begin; marital partnership no longer defines “real” life. Young women, older women, unmarried women – they are simply living their actual lives, not dress rehearsals for them, and the bonds they form with each other are as real, as varied, as complex and often as long-lasting as the ones they may or may not form with romantic and sexual partners, and as fraught and as true as the love they may or may not feel for their kids.

These women are, make no mistake, partners, spouses, family to each other. They get mad at each other for being late for dinner, for sleeping with the wrong people. They are jealous, possessive, dismissive of and bored by each other, sometimes in the emotionally manipulative style associated with lovers. Fighting over that too-adoring boyfriend, Marnie tells Hannah that she can’t understand because “you’ve never been loved this much.” She pauses. “Except by me. I love you that much.” While Jessa at one point turns to Hannah and issues a line that could have been taken from either romantic comedy or drama: “I am not a character for one of your novels. Stop staring at my face so hard.”

At the end of an early episode, Hannah, recovering from a series of life’s traumas, dances by herself in her bedroom to Robyn’s “Dancing on My Own.” Marnie arrives home; they laugh at the day’s indignities, and then, before you know it, they’re dancing – happily, freely, satisfyingly – together.