Even at $4 a gallon, Americans are paying far, far less at the pump than the rest of the world 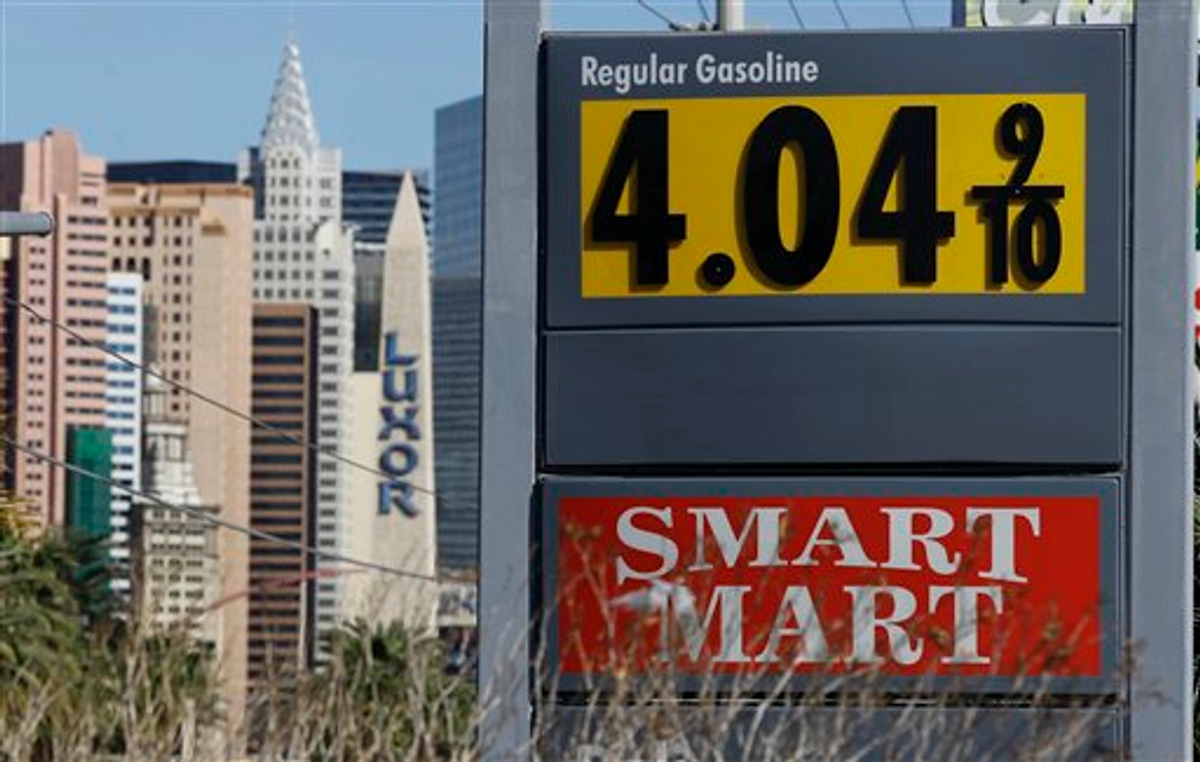 Gasoline prices of more than $4 are seen at a gas station on the south end of The Strip, Tuesday, March 20, 2012, in Las Vegas (AP Photo/Julie Jacobson)
--

ORONO, Maine — If you follow the news in the United States, you’re in for a long spring and summer. The rising price of gasoline at the pump will be the focus of extensive coverage, analyzing causes, parsing political arguments over blame and solutions, and telling stories of how Americans are dealing with it.

It is hard to avoid gas price lamentations in Time magazine, The Wall Street Journal, and my local daily paper. American complaints about gas prices are as natural as the return of the robin’s song. The truth is that even as gas approaches $4 a gallon, Americans have little to whine about. To be sure, $4 a gallon is more painful than $3, but in a global sense, what Americans' pay at the pump is a bargain.

In middle-income Turkey, for example, a gallon of gas costs upwards of $10. Impoverished Eritreans pay about the same. A friend of mine in Tel Aviv tells me a gallon there fetches about $8. A gallon of petrol in the United Kingdom was up around $8.40 a gallon in March, an all-time high.

High gas prices have persisted for years in other countries. Americans have been accustomed to much lower prices, which makes the current spike a rarity and the cause for coverage and complaints.

Several years ago, my wife and I paid about $4 a gallon to fill our rental car in Cyprus. The high price at the pump, the prevalence of narrow roads and a modest national income level have persuaded Cypriot drivers to shun SUVs; our rental car was barely large enough for both of us and the stick shift.

Americans can look longingly to Qatar, a country awash in energy wealth where a gallon of gas costs about a buck. Or consider Venezuela, where oil is produced by a government-owned company and President Hugo Chavez keeps local gasoline prices around 12 cents a gallon as a benefit to the nation's citizens.

Another way to think about gas prices is as a comparison to income. On that scale, Americans are getting a real bargain. In Cairo, where gas is $1.20, millions of Egyptians live on a few dollars a day.

Another factor in understanding gasoline costs is the choices Americans make about their personal transportation. SUVs, multi-family cars, the long commute from suburb to city, the lack of greater investment in public transportation are all factors that make getting around expensive, whether gas is $3 or $4 a gallon. The choices our public officials make to invest more in highways than subways reinforce the American sense of entitlement that the open road belongs to them. Budapest and Cairo, but not Miami or Houston, have functioning subway networks.

The American car culture limits my own choices. In rural Maine, where my wife and I live, public transportation is not widely available. We share a car. She drives a few miles to her job and I walk to mine. Like other Americans, many of our neighbors carpool, bike, walk or, if there is a bus route nearby, they go that way.

The rising price of gas is a seductive subject for journalists. It’s an economic story, a political story, a global story, a war story, a foreign policy story, a point-the-finger story, a human story.

Some perspective is in order. Journalists should reinforce the reality that our driving habits influence high prices, that our global neighbors pay a lot more than we do and that as a country we have to stop perpetuating the myth that we are entitled to low gas prices.