Jemima Kirke talks to Salon about drugs, her newfound fame -- and never wanting to be an actress 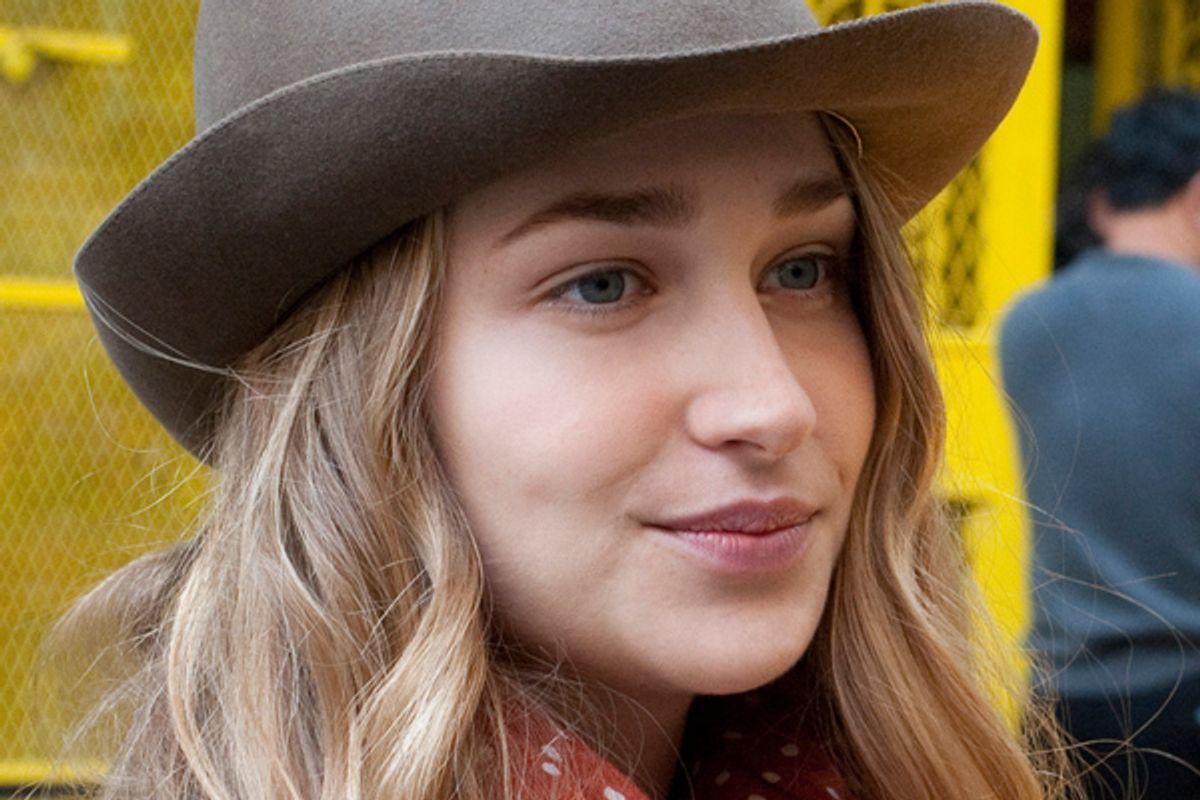 It shouldn’t be surprising that Jemima Kirke, the scene-stealing actress from Lena Dunham’s indie hit “Tiny Furniture,” has gone on to become one of the scene-stealing stars of Dunham’s upcoming HBO series “Girls,” which premieres this Sunday to dazzling critical acclaim. On-screen, Kirke comes across as carefree and glamorous, the kind of friend with a cool-girl vibe that can lead to a lot of fun trouble. In both "Tiny Furniture" and “Girls,” Kirke plays characters who are similar to real-life Kirke: well-traveled, funny, super-stylish and British (the accent, in case you were wondering, is real). Like the other stars of "Girls," Kirke's parents are famous: Her father is Simon Kirke, the drummer from Bad Company, and her mother is interior designer/muse Lorraine Kirke.

What is surprising is that Kirke considers herself a painter, not an actress, and had to be coerced to get in front of the camera. Kirke received her BFA in painting from the Rhode Island School of design (you can see some of her oil portraits here). She met Lena Dunham at St. Ann’s high school in Brooklyn Heights and agreed to help her out with “Tiny Furniture” after college. She is also the mother of a toddler. (Full-disclosure: I first met Jemima because I occasionally baby-sat her daughter.)

Kirke corresponded with Salon over email about her painting career, not identifying as a slacker, and slapping Lena Dunham too hard.

You did “Tiny Furniture” as a favor to your friend Lena Dunham. Did you have any idea that movie would change your life so dramatically? Would you have agreed to do it if you did?

Yes, sometimes I ask myself if I would’ve agreed to do it as there were unforeseen challenges. One being that it compromised the time I spend with my family and on my work. But I wouldn’t take it back, no. Who knows where I’d be otherwise?

In “Tiny Furniture” your character memorably first enters the frame by slapping Lena Dunham through a fire escape window. Whose idea was that?

That was Lena’s idea. It wasn’t a very hard slap. Not at first. But a few hours and many takes later I was hitting really hard. I wanted to go home.

Did Lena write your character Jessa for “Girls” with you in mind? Did you recognize yourself in the script? Was that strange for your friendship?

I was out of commission while she was writing the script. I had absolutely no intention of acting then or in the future and at the very least taking on any time-consuming projects. Lena knew this so she hadn’t planned on casting me, but at the last minute she asked me to do it. This whole experience has been an awkward place indeed for a friendship to survive. Though I’d say it’s made our bond stronger.

Your IMDB page says, “Jemima Kirke is a painter, actress and co-star of the coming HBO series “Girls.” There aren’t a lot of women on TV who define themselves as painters first. How do you manage to find time for your art off the set?

I don’t think there are any. That was one of the hesitations for me. Is it even possible that I can do this job and walk away? But, yes, it is hard but I make the time. I have to.

“Girls” is getting a lot of press about funny women and females as slackers. Which category do you fall into?

Ugh, who's saying that? Confusion, fear and self-esteem issues can manifest themselves in many ways, but I think it’s a rather shallow point of view to see these women are merely slacking. I don’t identify with the “slacker” thing, no. By the way, I’m funniest when I’m not being funny. I’m better to laugh at than with, pretty much.

What’s it like to see your image on the side of a bus? Since you’re a painter, how do you feel about the painted mural of the “Girls” cast in Williamsburg, Brooklyn?

It’s not something I can quite grasp the hugeness of. So I don’t feel anything when I see those things. Though I have to say it was startling to see myself in Us magazine for some reason. Maybe it was having my image in such close proximity to Jessica Simpson and the cast of “The Bachelor.”

How did you personally deal with that awkward in-between stage after college/early 20s that “Girls” focuses on?

You’re a mom. How did you manage long nights on the set with a baby? Are you thinking about having another child?

I was sad on the nights I wasn't with my kid. Those were the hardest. Some nights I would get home, take off my shirt, take her out of her crib, still asleep, and rock her close to me with our skin touching. I would say, “I'm so sorry I haven't seen you all day.” The truth is she was so young she could probably give a shit. But I missed her.

Your parents are semi-famous. Did growing up with notable parental figures change how you were raised?

They definitely were not famous enough for it to affect my childhood one way or the other.

You’ve repeatedly said you’re not a “real” actress. Was it intimidating to be on set with Judd Apatow and an entire crew of professionals? How did you handle it?

I had to repeatedly remind myself that there is a reason why they chose me. And it was not because of a particular skill I have for acting necessarily, but something else: an energy, a presence, a character, etc. I had to trust in their vision and in my ability.

You’re signed for Season 2. Does that make you feel like a “real” actress?

Megan L. Wood is an editorial fellow at Salon.